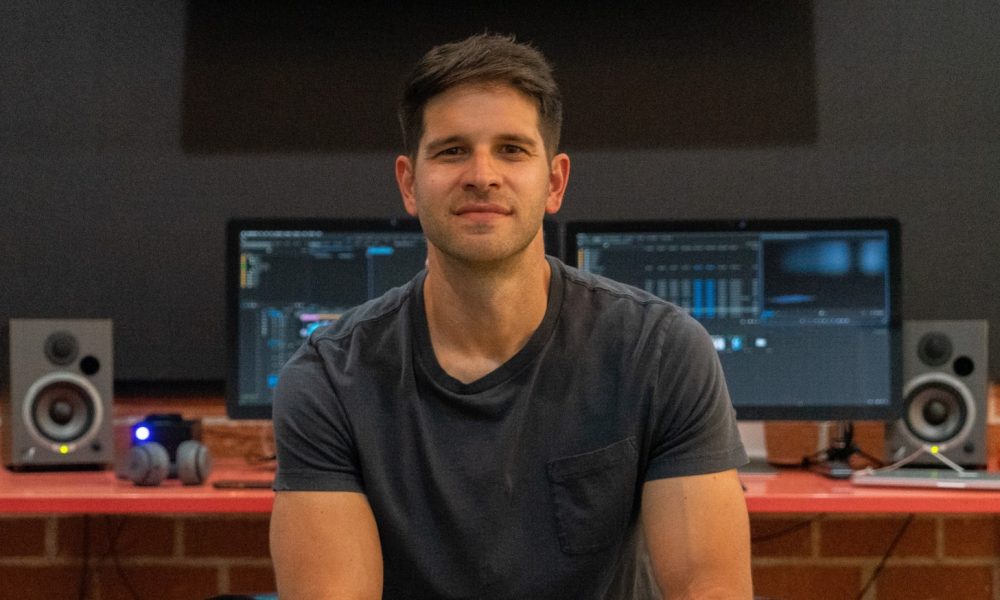 Today we’d like to introduce you to Alex Trudeau Viriato.

Thanks for sharing your story with us Alex. So, let’s start at the beginning and we can move on from there.
For as long as I can remember, I’ve been captivated and inspired by the power of films. When figuring out my career, I had the mindset that the film industry was only for a privileged few. I had the notion that it was not attainable to me or anyone outside actors and directors living in Los Angeles. In high school, I remember editing home videos and trailers to my favorite movies. I did not view editing as a career; I simply loved the creative power of watching others enjoy something I’d spliced together on VHS tapes.

With these false notions of the film industry clouding my vision, I decided to get my degree in Business Marketing. After briefly testing the waters of that field, I quickly came to the realization that it was not for me. I had a deep desire to create again, to be around filmmakers, and to tell stories for a living. I started reading books on the different disciplines in filmmaking and within months, I was packing up.

Moving to Los Angeles from the small town of Livermore, California, was exciting and simultaneously terrifying. I didn’t know anyone down here. I wasn’t a young 18-year-old who felt indestructible to take on any scenario. At this point, I was already in my late 20’s. People had full-blown careers in this industry by my age and I was starting from square one. I didn’t have time for another four-year program, so I searched for accelerated alternatives. That’s when I found The Los Angeles Film School.

At the time, they offered a one-year program that would cover all the aspects of filmmaking. It was here that I saw an opportunity to direct and edit my own thesis and utilize my current resources in the cycling community (I worked at my local bike shop Livermore Cyclery while attending University). I gathered up my credit cards, prepared to max them out, and set forth to make what would become the documentary – Fixation. A year later in 2012, at the near beginning of streaming documentaries, I made a deal with Netflix.

After graduation, when you don’t have classes to attend anymore, homework assignments to complete, nowhere to be, the reality sinks in that this dream relies on you and the work you put in. I edited everything I could get my hands on. If the opportunity arose, I’d edit it – web series, sizzles, reality, whatever. Sometimes working for free, other times it was just enough to make rent. I may have thought I should be cutting full-length features at this point, but that wasn’t realistic. If I took on a project, my objective was to edit it to the best of my ability, regardless whether I loved that particular project or not. I never want to think I’m better than the work.

As I started to meet more people creating content, I’d get more offers. I took Post PA jobs on feature films, including Don Jon and Ride Along, undoubtedly to learn and observe the dynamic of editor and director on studio features. I became the lead editor at Los York and for two years cut branded content for Nike, Jordan Brand, The North Face, and a variety of companies. Learning to tell a story in 60 or 30 seconds created new challenges that only sharpened my skills, not only in editing but collaborating.

All along, I was hoping that I’d get an opportunity to cut a feature. In 2015 that’s exactly what happened. One of the owners of Los York, Dex Deboree, pitched the idea of making a cinematic documentary about Michael Jordan’s first pair of shoes in 1984 and the social and political dynamics that would unravel after putting the name of an unproven African American rookie in a bold black and red Nike high top. It was called “Unbanned” (Streaming on Hulu and iTunes).

“Unbanned” was a two-year process of editing and story developing. It’s an incredible film that provided a window of opportunity for me to meet with the team at Rock Paper Scissors. Their reputation of creating top-level content across the board was constantly on my radar. After multiple attempts, I finally got my shot there. I cut a small project that earned the trust of the top-level executives and I joined the team on Killer Inside: The Mind of Aaron Hernandez.

Great, so let’s dig a little deeper into the story – has it been an easy path overall and if not, what were the challenges you’ve had to overcome?
I grew up fairly privileged with supportive parents and even met my incredible wife at the age of 18. From that baseline, I was able to prevail through some of the struggles that come with diving into the film industry and not knowing a single person out here. When I was editing anything and everything they were not high paying jobs – a big portion were no pay. I was simply trying to hone in on my craft and style. When you’re in a one-bedroom apartment, editing a web series for a hundred dollars, in a small living room, next to your wife and newborn baby, there’s a real gut check on how badly you want this career. Being broke on my own is one thing, not being able to provide for this new human is another thing entirely.

This wasn’t simply a maxed-out credit card on Fixation, I needed this to be a viable career with income to provide. I had my own self-inflicted pressure and anxiety to create a body of work that would make myself and my family proud.

Leaving home to work endless hours now had a harsher consequence. My wife and son were creating memories and bonding while I was grinding away on an edit only a handful of people would see and could possibly lead to nowhere. In hindsight, my firstborn was a major motivation that helped me push forward in this industry, forcing me to be more direct on what I truly hoped to accomplish. His birth was an even bigger contributor in finding out what type of father and human being I aspired to be.

The desire to make films was no longer this singular factor to achieving my goals. I now dreamt of a life balance where I had my family, hobbies, spent time with my son and also made films. It redefined my idea of success. Even so, there were many months I figured this idea of making films was just some dream, and that’s where the idea should stay – in my mind, when I closed my eyes at night.

We’d love to hear more about your work.
I once heard someone describe editing as “just taking out all the mistakes.” As if films would simply come together fluidly if we removed the footage before and after the performance. I still battle with the idea that editing is an invisible art. If the viewer pays attention, yes, they will see the point in which we change camera angles. That’s not what I’m talking about. Often times as an editor, your work needs to go completely unnoticed by the audience. It’s perfectly fluid and the story shined through the screen and enlightens an audience. Nothing removed them from the experience. Success.

For documentaries, the interviews may be conducted elsewhere but the story is written in the edit suite. You’re writing it with the words and placement of the interviewees. And so many different stories and narratives could be told with the same interviews. This is when you need a strong team and direction on what we’re all trying to accomplish. “Unbanned” and “Killer Inside” were two completely different experiences.

“Unbanned” had the challenge of 57 interviews, 21,000 assets (hundreds of ripped YouTube videos, Nike commercials, news articles, etc.) and an upbeat cadence that we wanted to sustain for 90 minutes. The edit draws attention to itself–it’s flashy and high energy. As the editor, I’m filtering through these interviews, watching them multiple times, gathering ideas, plot points and topics.

Which person says what, and when, can make all the difference in the direction and purpose of a documentary. It was my job to guide the audience through the 80s, to Michael Jordan and Nike, and conclude with current culture/social impact. All this without losing focus on the bigger story of passion and inspiration that all these people experienced. Never treading too far off-topic, while making a large enough statement on this moment in history. So many times on this project I found myself discovering editorial ideas when I was away from the computer. A backpacking trip or simple walk around the neighborhood could open my mind in a way that made editing ideas vibrant in my mind.

“Killer Inside: The Mind of Aaron Hernandez” was much different. I joined Will Znidaric, who had already been on the project for over three months. Before either of us were involved, it was a two-hour feature film and now we were going to start over and make it a three-part documentary series for Netflix. This required a complete rethinking of the structure and arch of the story.

Will has an incredible ability to tell stories that can resonate with anyone, whether you have preexisting knowledge of the topic or not. Together we pulled out themes that everyone can relate to – fatherhood, identity, loyalty, passion and betrayal. With these themes, it’s irrelevant if you’re a fan of sports or crime docs. As an editor of documentary or scripted, you need to have empathy for the people or characters. I want to be open to multiple sides of an argument or opinion. This allows me to explore personal stories and really dig into how complicated and diverse humans can be.

On documentaries, it’s not my job to force my personal predetermined opinion on the viewer. Yes, the edit will have my DNA all over it, but what I really want to accomplish is provide the viewer with the information/story we’ve discovered in a way that’s intriguing, entertaining and cinematic. 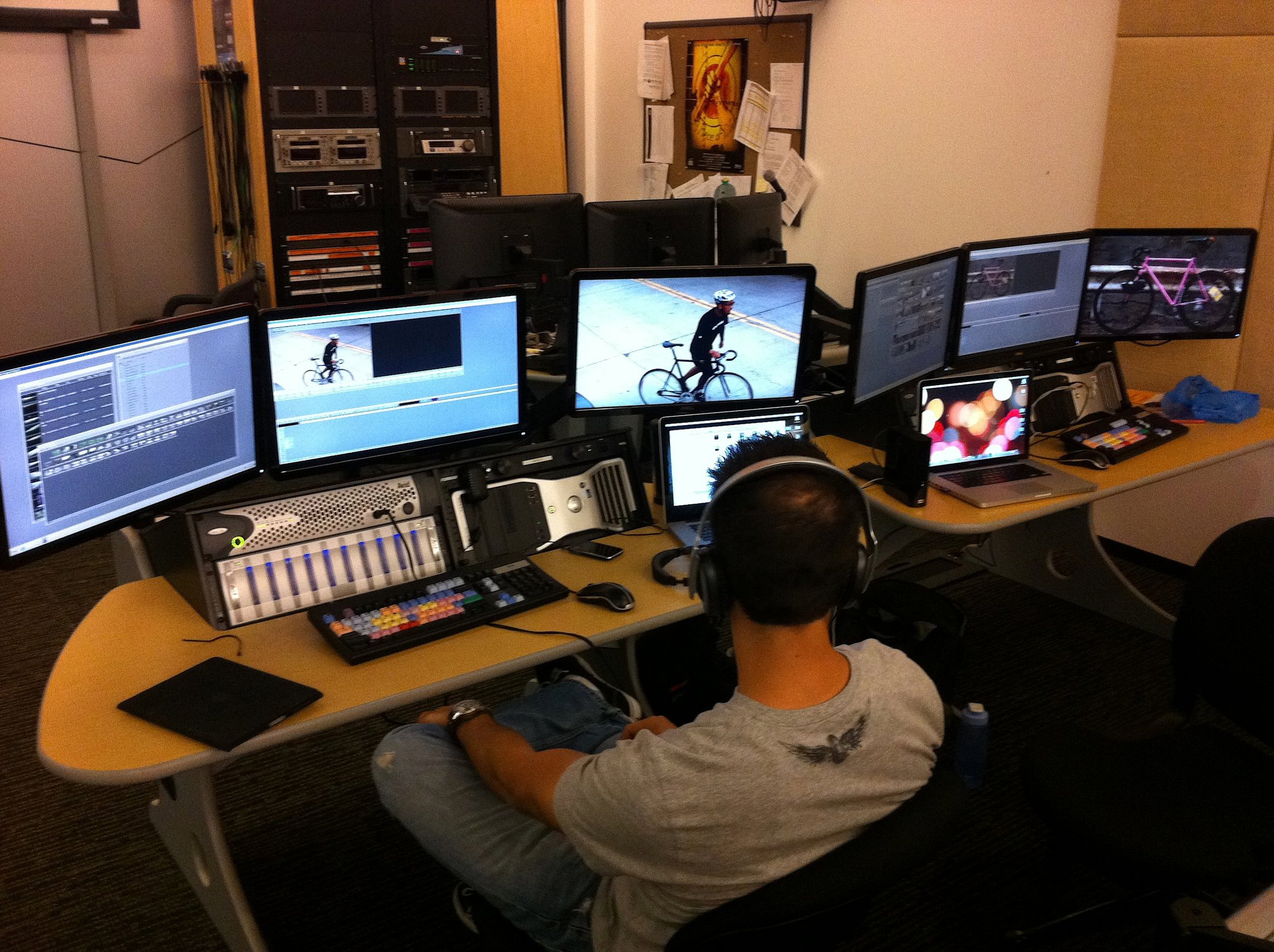 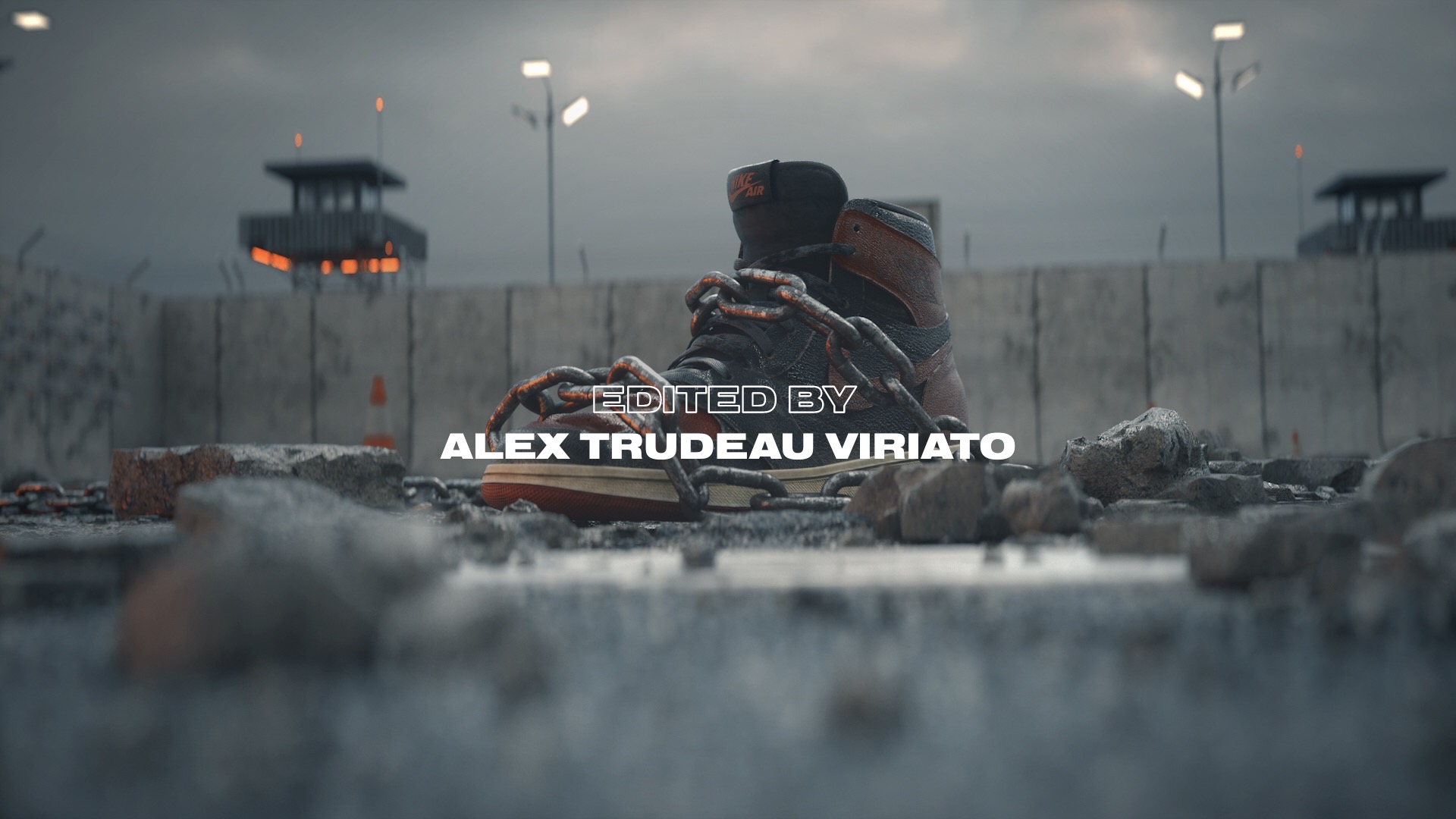 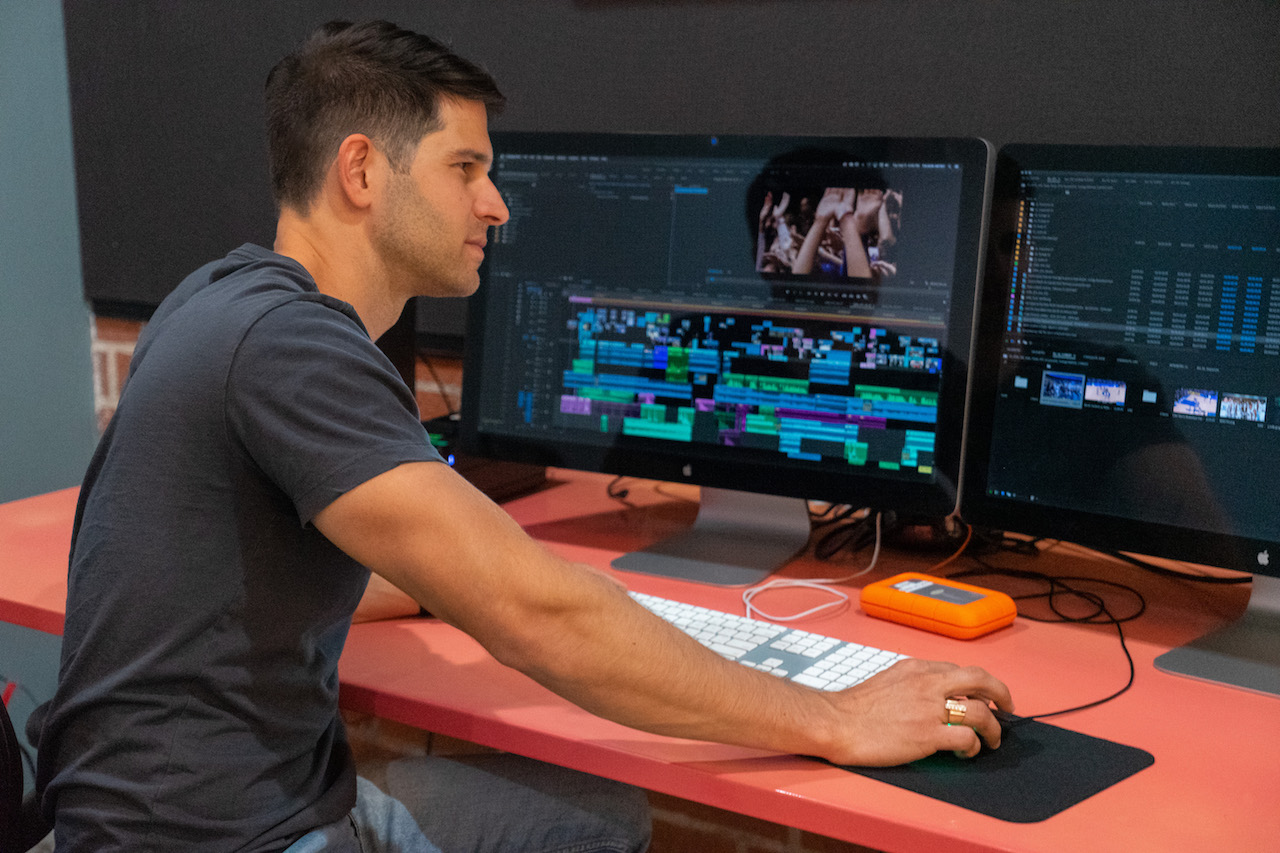 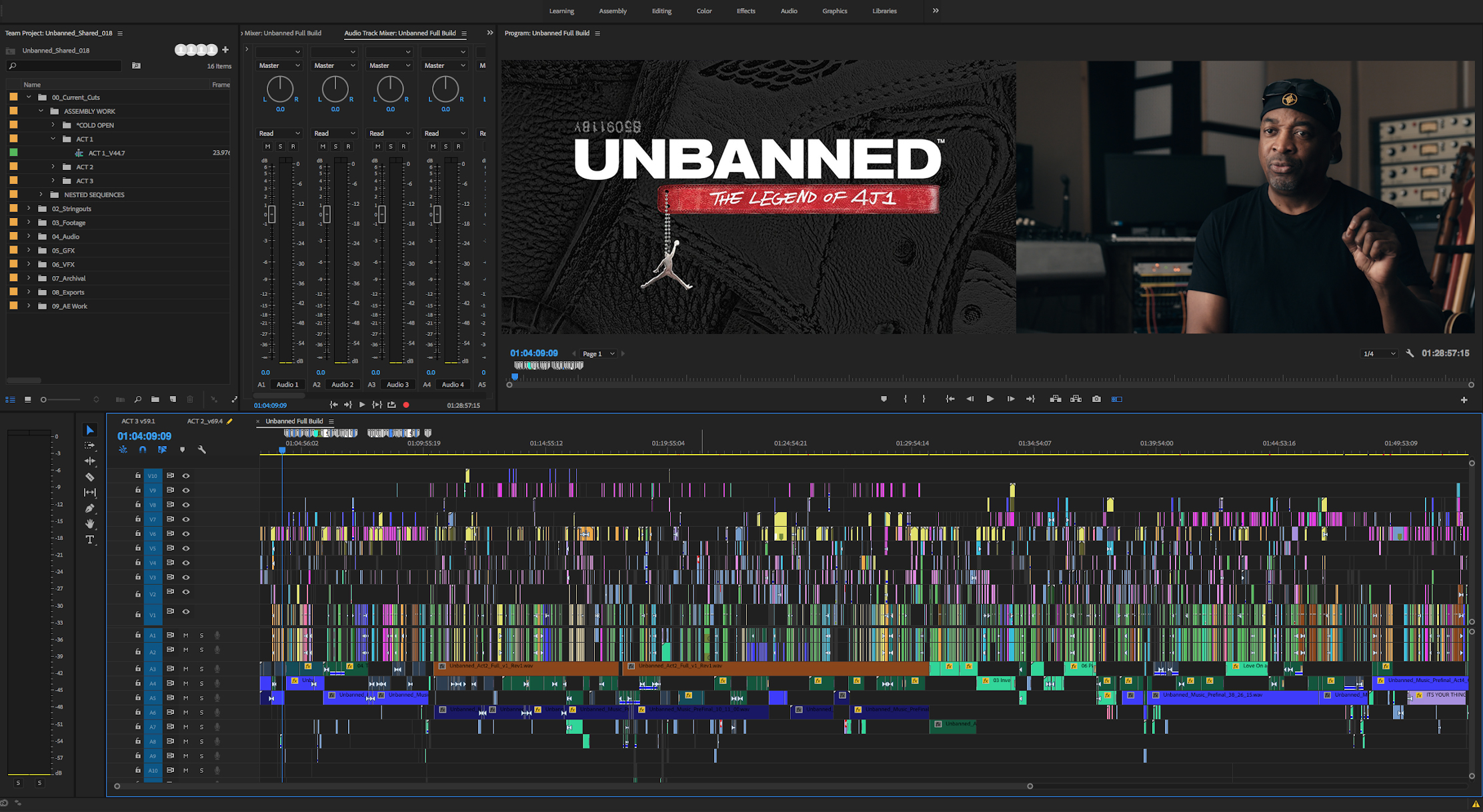