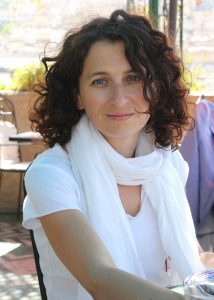 Today we’d like to introduce you to Nadia Leonelli.

Nadia, we appreciate you taking the time to share your story with us today. Where does your story begin?
I’m a filmmaker and I’m Italian. Started by acting in local Italian TV shows when young and eventually graduated from a Theatre Academy in Italy hoping to build ‘a life in the theatre’. Then everything changed. I was madly in love with New York City and decided to move there, just like that, with two cents in my pocket and no support system, but at 20 it didn’t really matter. I learned how to navigate the pros and cons of the Big Apple and lived my dream, although it also meant I had to give up acting — it was too hard with my Italian accent and no connections. But I never lost the passion and continued taking classes at some of the major acting schools, fascinated by how very specific aspects of each technique would resonate with some actors and not others and how completely opposite techniques would enable different types of growth in the same person. Eventually, I used my skills to coach young actors and in the meanwhile, I worked my way up in film production, first music videos, then commercials and eventually movies. Over the years, I experimented with entrepreneurship and with different roles within the entertainment industry, but at the core I always circled back to two key drivers in my life: tell stories and enable talent, which is what I still do.

Can you talk to us a bit about the challenges and lessons you’ve learned along the way. Looking back would you say it’s been easy or smooth in retrospect?
I’m not even sure what a smooth road is, really. It never was but maybe that is a choice, smooth roads are boring. The struggles were many but the first one was right in front from day one: I am an immigrant. Like all immigrants, I encountered the financial, political and cultural roadblocks that this country manufactures, although being a white European, my problems have been a fraction of what refugees or non-white migrants face every day. It’s a hard world out there. I am also a mother and filmmaking doesn’t really function 9-5 for the most part. Balancing the physical and mental needs of a family with the needs of productions, travel and running a business eventually made my transition to more ‘corporate’ media roles rather than life on film sets. Priorities matter.

But, beyond all the potential societal roadblocks, my hardest struggle has been with myself. Being able to enjoy the moment, being present, instead of always multi-tasking and holding myself to the highest expectations is still a work-in-progress. It is partially genetic and partially related to the fear that most immigrants have to ‘lose it all’ if you don’t constantly try. 20 years in round-the-clock New York City didn’t help either. So, when I arrived in LA I decided to live by the ocean. The beach at 8 AM, especially in the winter, is nature’s therapy.

As you know, we’re big fans of you and your work. For our readers who might not be as familiar what can you tell them about what you do?
In film, I am known as a producer from my independent films mostly. I worked international productions and with young filmmakers and was very proud of the Sundance Awards, Independent Spirit Awards, major releases, and other recognitions the movies received.

On the entrepreneurial side, the food brand I launched — Element Snacks — is known and available nationwide, so that’s a completely different side of me and two worlds rarely cross.

Without boasting too much about a very soft skill, I think what differentiates me is a certain ability to see and grow undeveloped talent, whether that is a first-time director, a young writer or a young actor. In a way, I am most proud not of my own successes but of the successes of the creatives I believe in, first and foremost my daughter who’s having a phenomenal acting career. Being able to witness the talent blossom, being an enabler, and being at their side when it’s finally recognized is the joy of my life.

Today, I am packaging two TV shows and I believe they are both very relevant and tell stories that we want — and should– hear. The first is about two young immigrant women from very different worlds, which as you can imagine is very personal.

The second one is about ethics in medicine, the struggle of a husband-wife team to keep control of a surgical discovery that gets hijacked by the greed of the medical industry.

I still coach young actors and I am also finally taking the time to formalize and write down the methodology I have used through the years. There is a strong connection in between the way our nervous system operates and acting, which is recreating someone else’s inner life from external clues (a script). Acting methods hardly address our physiological differences or even explain to actors what that means. It might become a book or a blog, I don’t know yet, but I hope it will be useful.

Are there any books, apps, podcasts or blogs that help you do your best?
Most of my days start and end with Calm or Breethe, the meditation apps. Learning to let go is an ongoing process that I will carry with me forever.

The Sunday New York Times in print edition. I am normally techy and fully digital but this is my one guilty pleasure. We consume the news at warp speed and taking the time to delve into longer op-eds and analysis from bright minds has really had an impact on my own thought-process.

I’m also a bit of a home-fitness junky lately. Thanks to the pandemic, I realized how much easier it is to challenge myself when I don’t feel observed. From TRX to barre, HIIT, Pilates, plyo, rebounder or yoga I hop around different apps and trainers. To each their own, but keeping fit is such a big part of that brain-body connection that makes us whole.