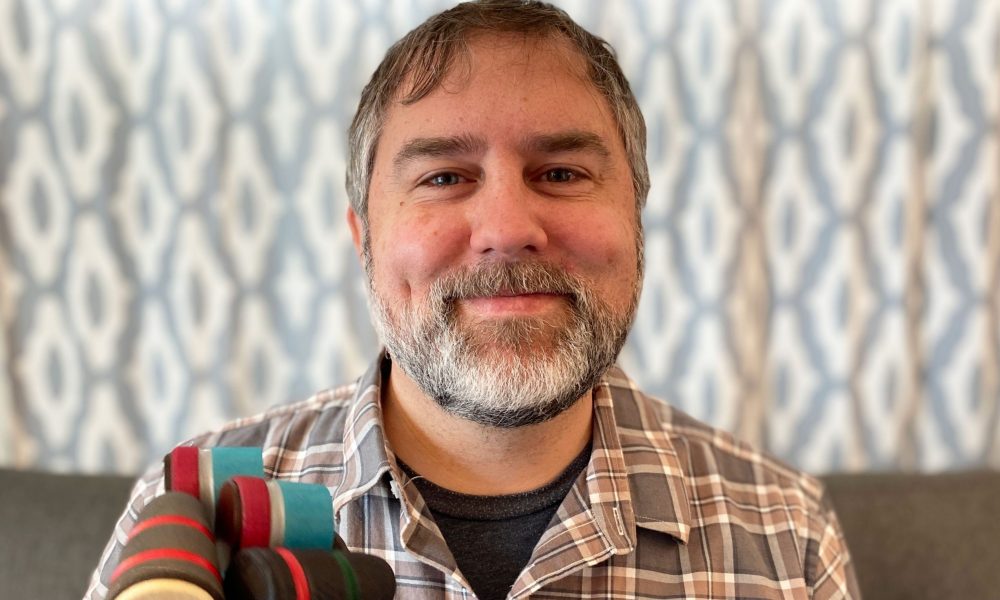 Today we’d like to introduce you to Jeremy Brieske.

Hi Jeremy, so excited to have you on the platform. So before we get into questions about your work-life, maybe you can bring our readers up to speed on your story and how you got to where you are today?
I started playing drums in middle school and played in bands throughout high school and college and into my 20s. I never really considered a career as a musician, so after college I started working in marketing for musical instrument manufacturers. I always seemed to have a knack for product development, and I felt like someday I’d like to start my own company.

Fast forward to 2013, I started thinking about drumming products. At the time, there were dozens of talented builders making high-end drums, cymbals and accessories. Almost every category had at least one company making really beautiful, high-end drum products. One glaring exception was bass drum beaters. This was the realization that eventually turned into Low Boy Custom Beaters.

A bass drum beater is the piece that attaches to a drummer’s foot pedal and it strikes the bass drum. It’s a hugely important part of the drum set, and you can totally manipulate the sound of your bass drum by changing the beater. Bass drum pedals had existed for more than 100 years, and it just didn’t make sense that there had been very little innovation in bass drum beaters for an entire century.

So, my partner at the time and I spent almost a year working on our product. We wanted to make a beater that sounded better than anything else on the market was perfectly balanced so drummers would feel comfortable playing it and had a style that would fit in paired with a high-end drum kit.

The goal was to make this a side hustle, but right after we launched the company in October 2014, we knew it was going to be bigger than that. We started getting orders on our website immediately. Then drum shops from around the US and the world started stocking our beaters. After about six months in business we got a call from Glenn Kotche’s drum tech – Glenn plays drums in the band Wilco. Glenn was looking for a new beater and ended up switching to Low Boy, and he became our first official artist.

Here we are more than seven years later. We’ve built tens of thousands of bass drum beaters and I can’t believe some of the drummers who play our products. People like Steve Ferrone, who has played with Eric Clapton, Tom Petty and the Heartbreakers and is currently on the road with John Mayer. Lester Estelle Jr. from Kelly Clarkson’s band is an artist, as is Rashid Williams, who tours with John Legend. A few more are Charlie Hall from The War on Drugs, Matt McCaughan from Bon Iver & Hiss Golden Messenger, and Amy Wood, who played drums and produced Fiona Apple’s Fetch the Bolt Cutters album.

Alright, so let’s dig a little deeper into the story – has it been an easy path overall and if not, what were the challenges you’ve had to overcome?
Overall, I think we’ve been lucky. We started documenting our journey on Instagram about six months before officially launching, so we’d already built up an audience and had sales on our first day in business.

2014 was a great time to launch a brand on Instagram. We never spent a penny on advertising since we could reach tens of thousands of drummers around the world for free. Then word of mouth took over.

I even feel lucky that we weathered the COVID storm better than many businesses. During lockdown and continuing for the past two years, people have doubled down on hobbies they can do from home, like making music. Many people started playing an instrument during the pandemic, and people who already played drums were upgrading their gear with the money that would have gone to vacations and nights out.

We’ve also been helped by the fact that so many amazing pro drummers play Low Boy. People see them playing our beaters on Instagram, YouTube and TikTok, then they want to learn more about why our beaters are better than our competitors’ products. We’ve never even spent a dollar on influencer marketing.

As you know, we’re big fans of Low Boy Custom Beaters. For our readers who might not be as familiar what can you tell them about the brand?
Like I said earlier, we set out to make a product that sounds better, feels better, and looks better than any other bass drum beater out there.

When you think about it, the bass drum drives almost every genre of popular music. Imagine your favorite bands or artists without that pulse. The music just wouldn’t sound or feel the same.

But different styles of music call for different bass drum tones. Think about punk or metal. The drummer is competing with loud, distorted guitars and screaming vocals, so they need a sharp-sounding bass drum that can cut through all the noise. On the other end of the spectrum, you have jazz drummers or people playing in quiet acoustic settings. Those drummers are often looking for a big, boomy bass drum tone. We like to say that each note should be felt but not heard. And in the middle, you have pop, rock, country, hip hop and other genres that call for an in between bass drum tone.

The material that hits the drum is going to affect that tone. All of our beaters are made from wood, but you can order a beater with either a wood, leather, felt or lambswool striking surface, and they all sound totally unique. What’s amazing about that is the same core product can be used by a jazz drummer like Scott Amendola all the way to Austin Archey from Lorna Shore, which is a deathcore band.

In terms of feel, it’s really simple. Once you sit down behind the drums and start playing, the last thing you want to think about is your beater. It should feel natural, and you don’t want to fight to translate the music in your head to the kit. We worked really hard on the beater weight and balance, so it feels like an extension of your foot.

Without tone and feel, style wouldn’t mean much, but we want drummers to feel inspired when they look at their drums, so cosmetics are really important to us. Our beaters are hand-stained and painted in our Santa Barbara shop, and you can go on our website and customize the colors to match your drums. You can even order custom laser engraving, so your beater ends up being one of the most personal pieces of drum gear on your kit.

Where do you see things going in the next 5-10 years?
The challenge is always getting more people into drumming, especially kids. Less than 1 in 5 California public schools has a dedicated arts or music teacher, so the opportunities to play an instrument just aren’t available like they were when I was a kid.

Right now, there are some good people pushing to get the Arts and Music in Schools measure on the November 2022 ballot, which would provide almost $900 million in additional funding each year for arts and music education in every PreK-12 public school in California – without increasing taxes. I really hope that passes.

The biggest shift for professional drummers, though, is the integration of electronics into the drum set. Since so many recordings are made without a live drummer playing the parts, touring drummers have to recreate those sounds live. So, if you want to be marketable as a professional musician, you need to be a good drummer, but you also have to know how to work with a laptop as part of your drum kit. 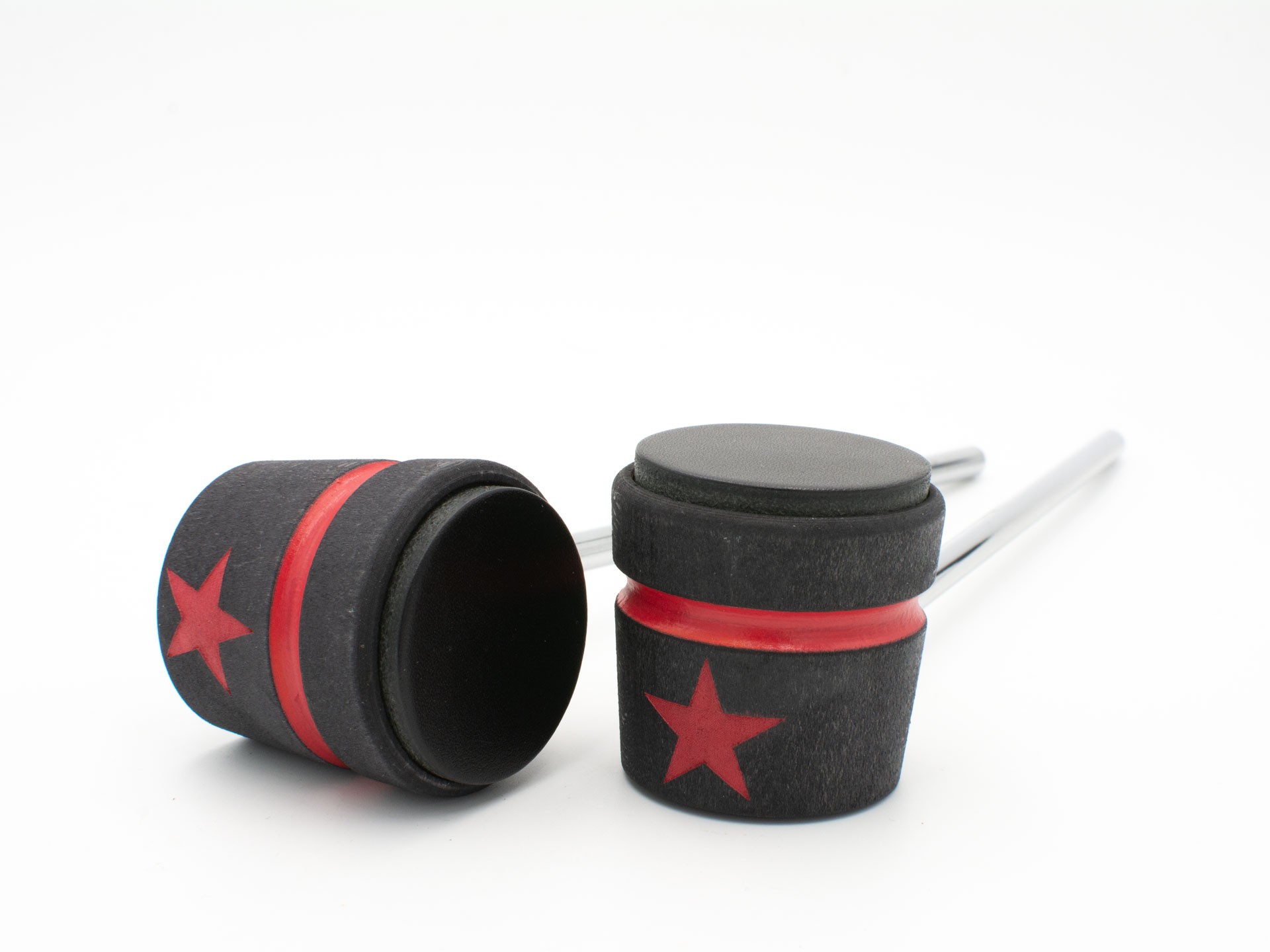 The black beaters with red stars were built for Guns n Roses drummer Frank Ferrer. They were built to match the kit he’s currently using on tour with GnR 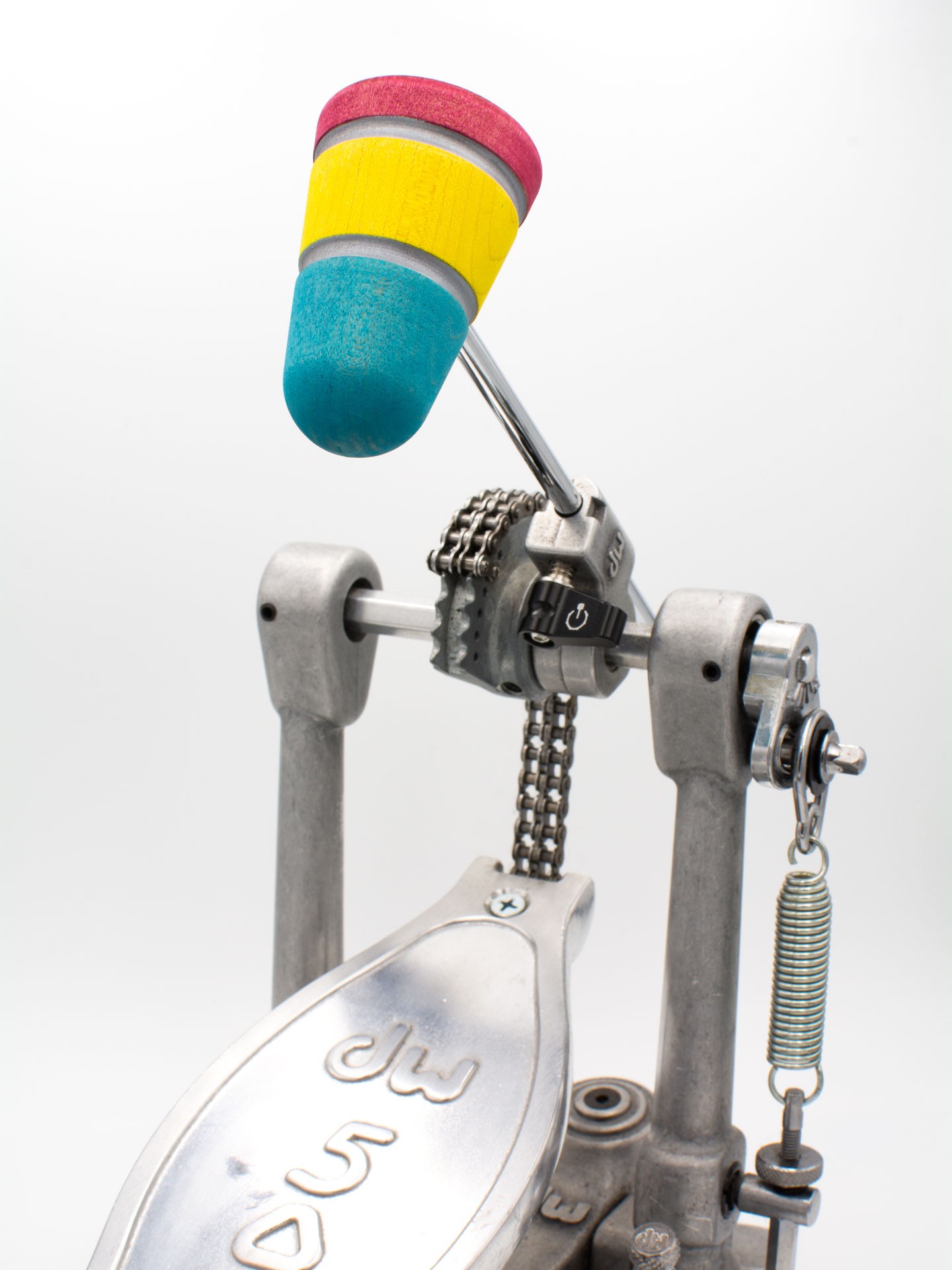 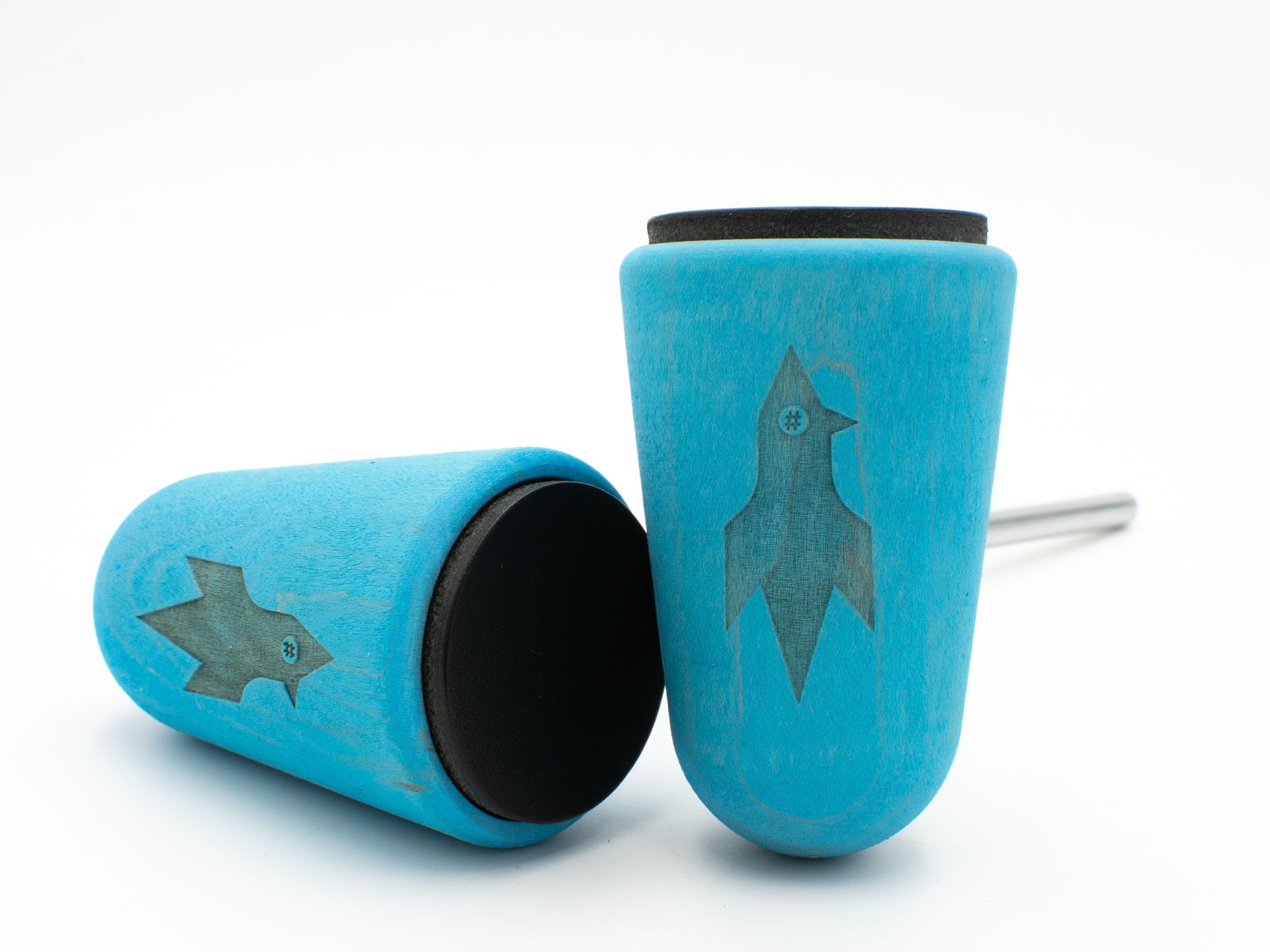 The blue beaters with the bird were built for Jessica Burdeaux from the Chicago band City Mouth. 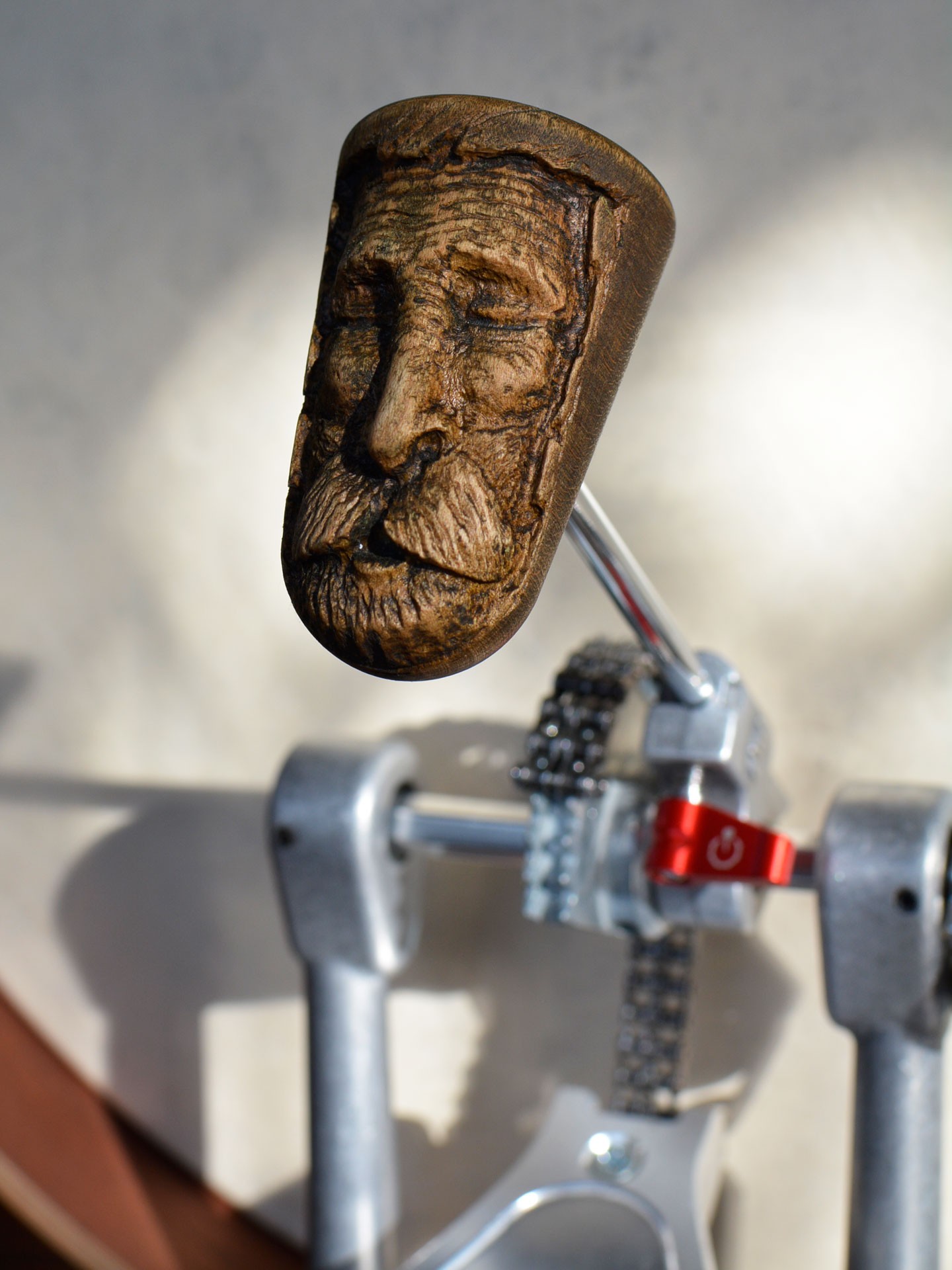 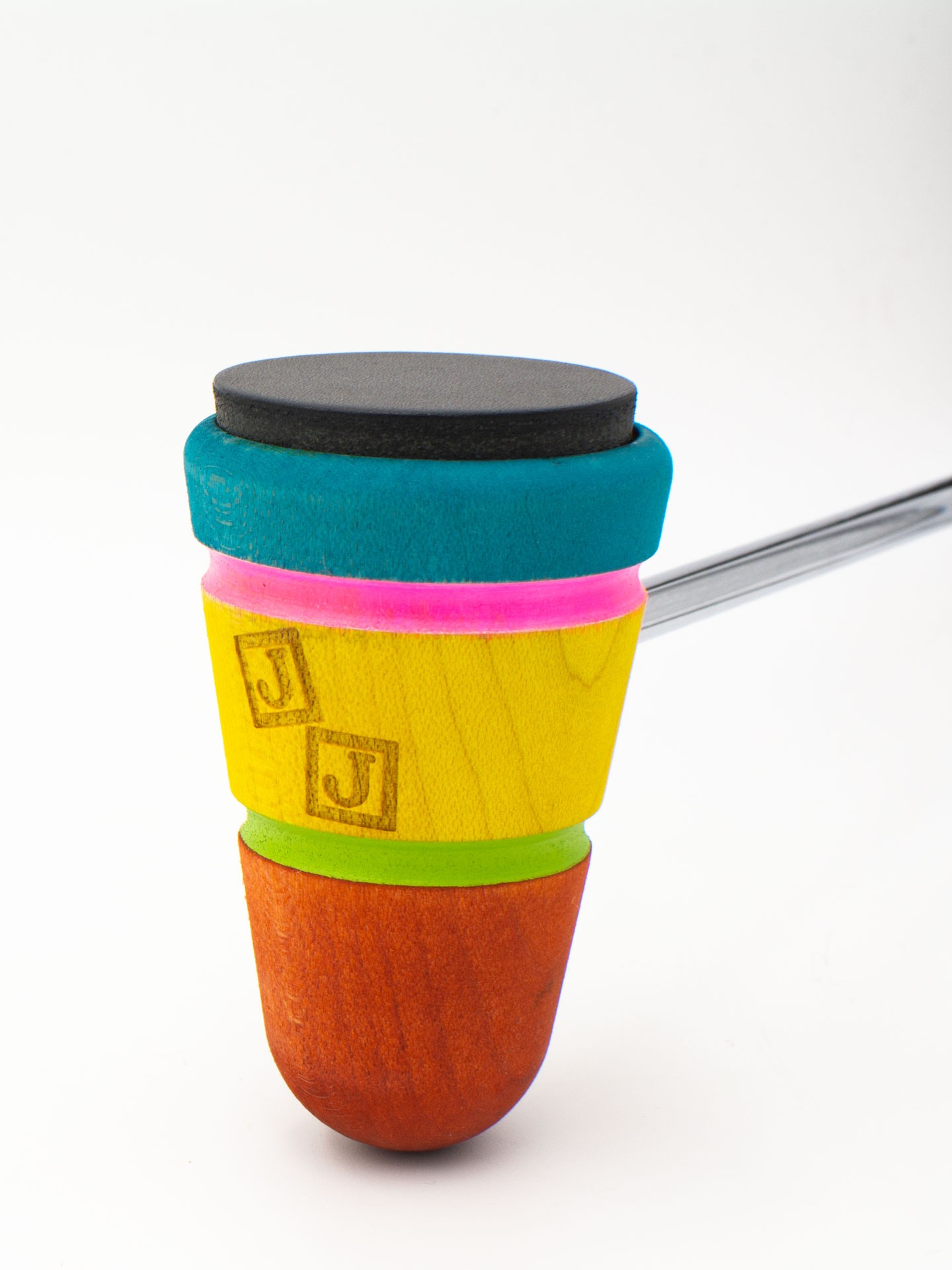 The colorful beater with the JJ blocks was built for Tank and the Bangas drummer Joshua Johnson. It was inspired by the cover for their album “Friend Goals.” 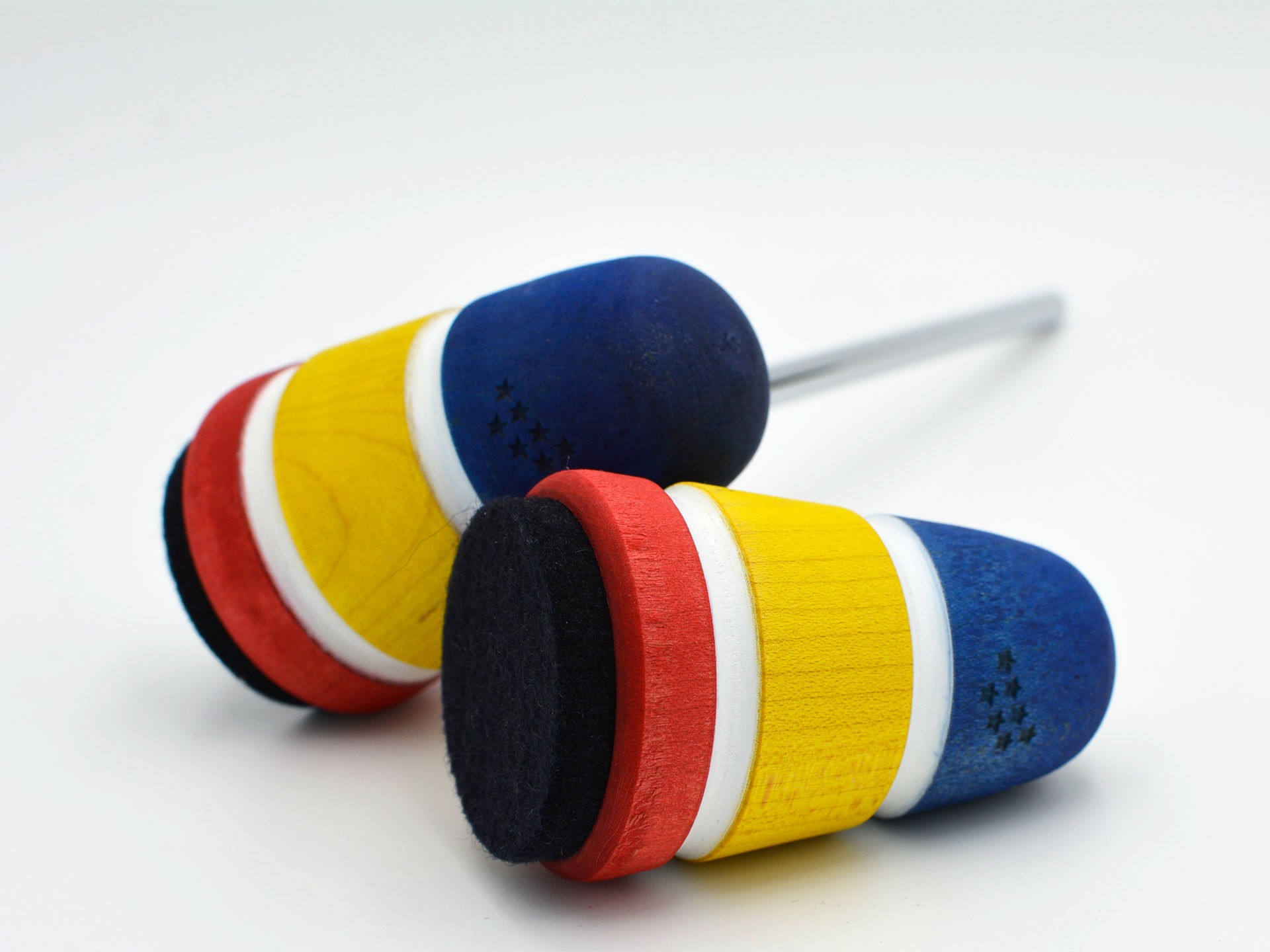 The pair of red, yellow and blue beaters with the seven stars were built for Bon Iver’s Matt McCaughan. They were inspired by the Durham, NC flag, Matt’s hometown. 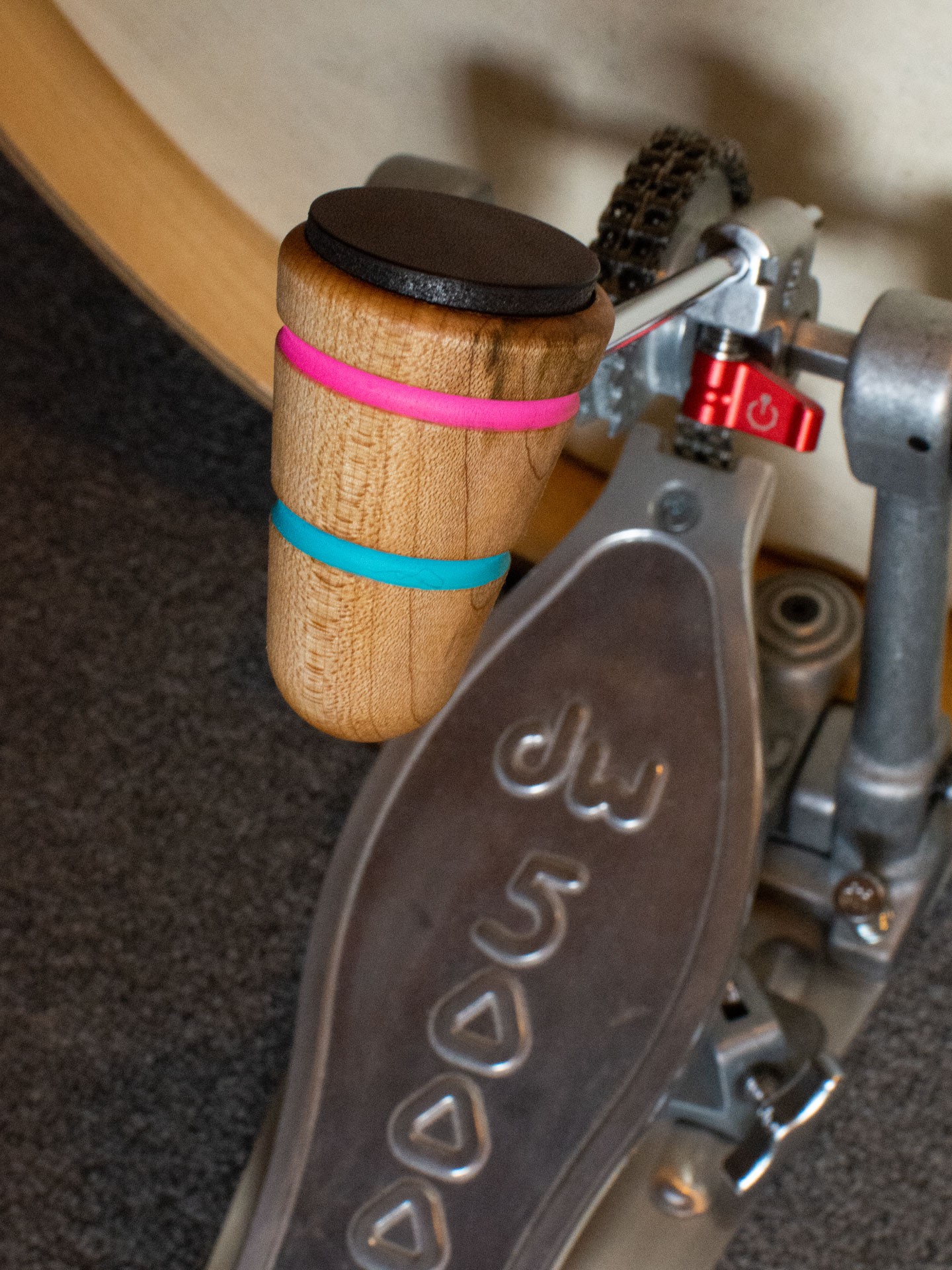 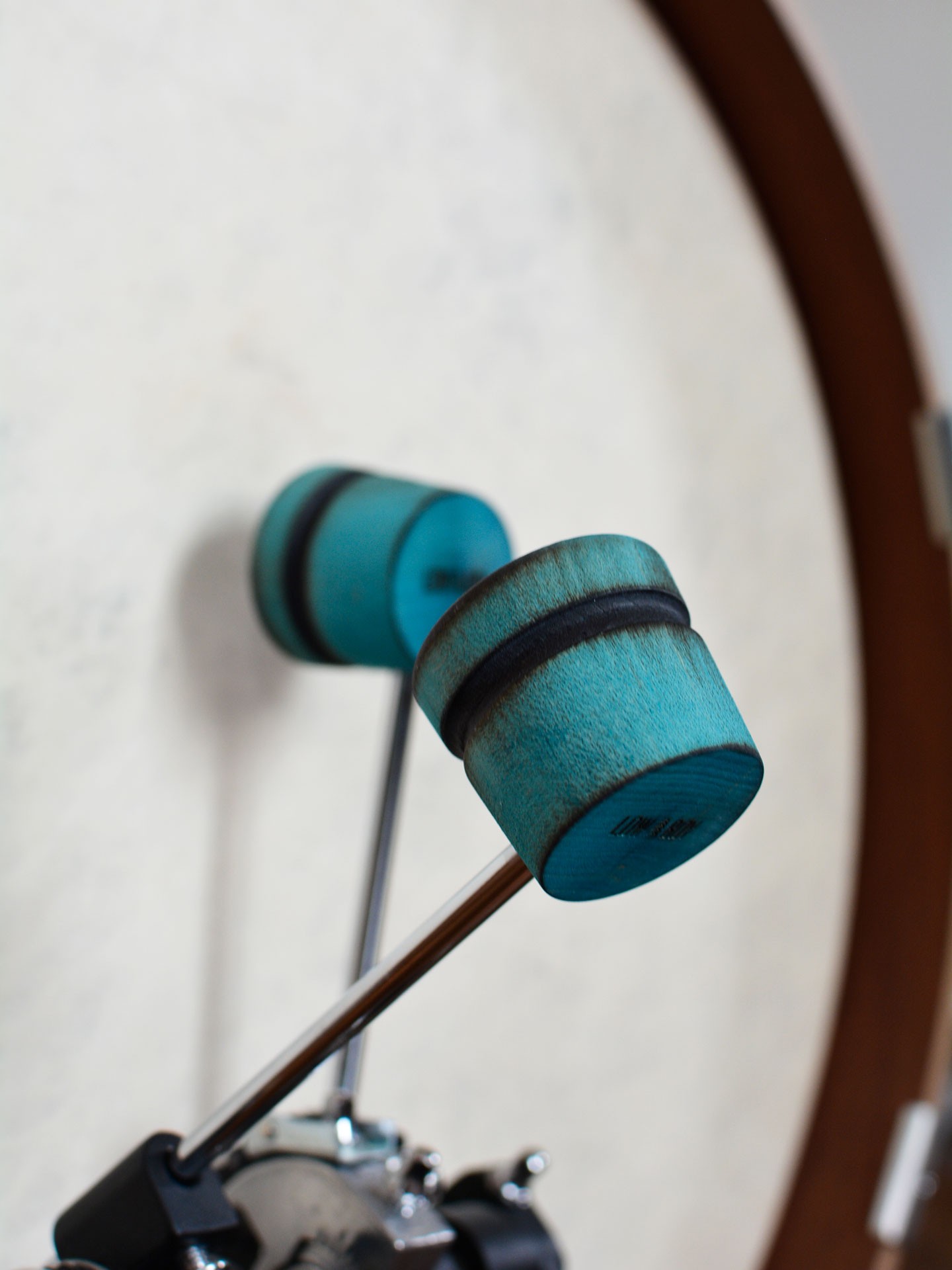