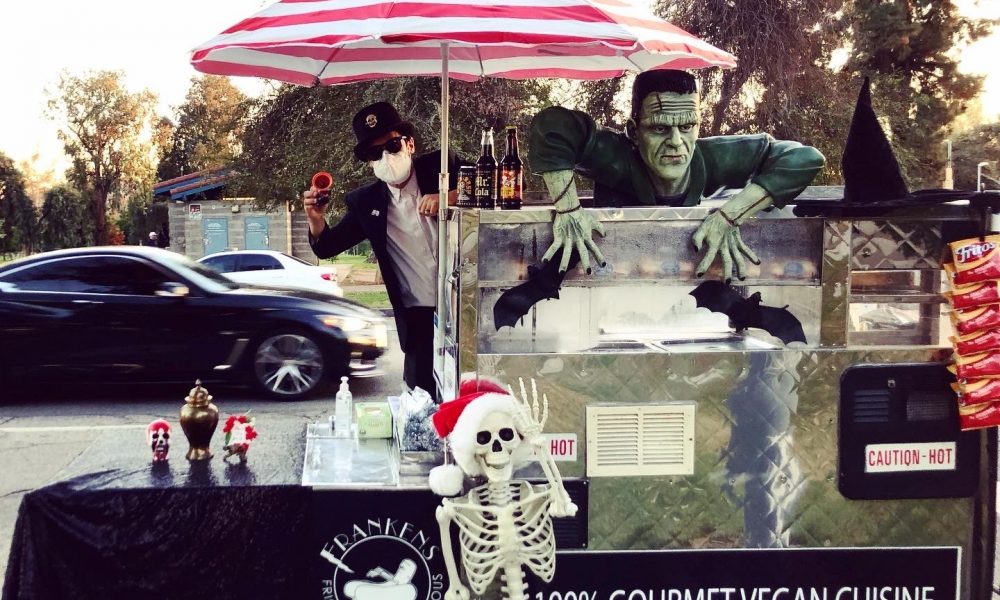 Today we’d like to introduce you to Raymond Alishan.

Alright, so thank you so much for sharing your story and insight with our readers. To kick things off, can you tell us a bit about how you got started?
I started The Frankenstand after getting hit by lightning down in my laboratory. It was Autumn of 2004 and I was preparing to move to New York when the storm came ⚡️ After the bolts hit, I suddenly became so motivated by an ambition to breathe life into a brand new idea, I sent all my courier bats into the skies to see what they could find. They returned only to confirm it was a ghost of an idea that had never been done, and this was my chance to discover my purpose! By the spring of 2005, The Frankenstand was alive! It is an all vegan haunted hotdog stand with the goal to normalize vegan food by revamping what was known as a meat-eating tradition into a veganized version. This made it very unique and the first of its kind at the time. Fast forward 16 years later and some may say there is a plethora of vegan options in the streets today. It has been absolutely excellent casting shadows, spooking taste buds, reanimating lives and watching the demand for vegan fare grow. The Frankenstand is a one ghoul business and is entirely mobile giving the ability to haunt anywhere within LA. You can enjoy these frighteningly delicious wares during curseside pickups or at events, festivals, concerts, sanctuary’s, and almost anywhere. It is also available for private happenings. Fangs-a-lot for listening and creep in touch for my scareabouts!

I’m sure you wouldn’t say it’s been obstacle free, but so far would you say the journey have been a fairly smooth road?
I had to carve out the road foot by foot as I made my way down the path. Many people doubted me. They doubted the idea. The concept of vegan street food was unimaginable at the time. It took several years before anyone would want to eat from my stand. I would set up in DTLA and people would ask what I was selling and once I said “vegan” hot dogs, they would turn their nose up, walk away, or mock me. After a year of that, I tried setting up outside The Smell, a local band spot in DTLA. Did okay for a bit until the police began kicking me out. I moved on to the DTLA Art Walk until I was attacked and robbed. It was like running on a treadmill for a good three years until I was able to link up with 90% of the veggie community in LA through the help of a popular vegan blogger at the time who wrote a review on me after visiting. It was never a goal of mine to feed vegans. I actually really wanted and want to feed those unaware of veganism and how satisfying the food can be! But, I am surely, without a doubt, deeply appreciative for being able to form a connection with the vegans of L.A. They have always been here for me. I truly believe we wouldn’t be having this interview if it wasn’t for them. On more than one occasion over the last 16 years, I have faced setbacks that I didn’t think I could bounce back from. I held fundraisers as last hopeless attempt to save my business. But the community answered and it is why I am here today, forever grateful.

Thanks – so what else should our readers know about The Frankenstand?
The Frankenstand is a spooky-themed hot dog stand born out of my love for classic horror and veganism. Frankenstein’s Monster being my favorite of all. I believe few are aware that Mary Shelley was vegetarian and a romantic literary personality giving impetus to the shift to vegetarianism. She depicted the Monster as vegan, surviving on acorns and berries. A little side note to the inspiration behind my business name and concept. I think another important aspect people do not  know about my business and about me is that I own and operate The Frankenstand by myself as well as working a full time job as a special education assistant for LAUSD. That may help clarify why The Frankenstand isn’t in operation 100% of the time. The struggle to balance both jobs is ‘hex’tremely challenging but, I am fueled by my passion and love for my work so I do my very best to keep as active as possible, for my students and for my customers! In 2005 when I was putting this monster together, it was such a fresh and unique concept, bringing it to life was an absolute must for me and the toughest thing I’ve ever done. I am still constantly learning and perfecting my skills as vegan food evolves and the demand for it grows. But I’m a sucker for the classics, paying homage to old horror and keeping the fare as traditional and frighteningly delicious as ever! So when visiting the The Frankenstand you will be taken back to the roots of where it all started, and you’ll really ‘dig’ it!

Any big plans?
My crystal ball shows me The Frankenstand will grow into more stands beyond the one that exists today. Possibly a free standing location with an expanded menu and a lot more ghosts! 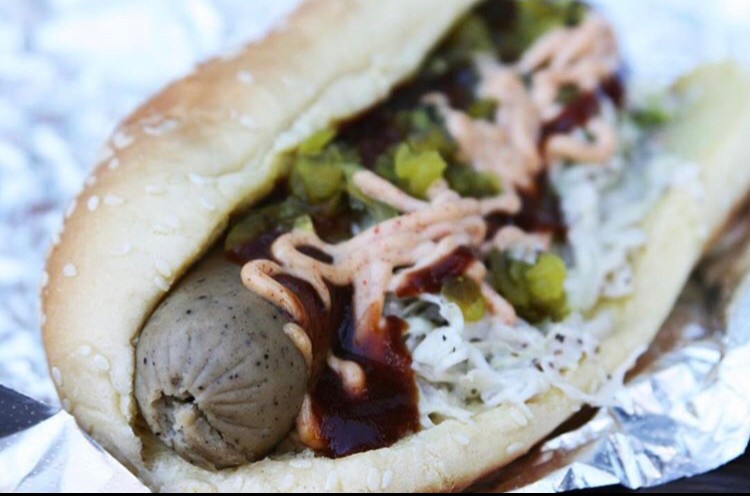 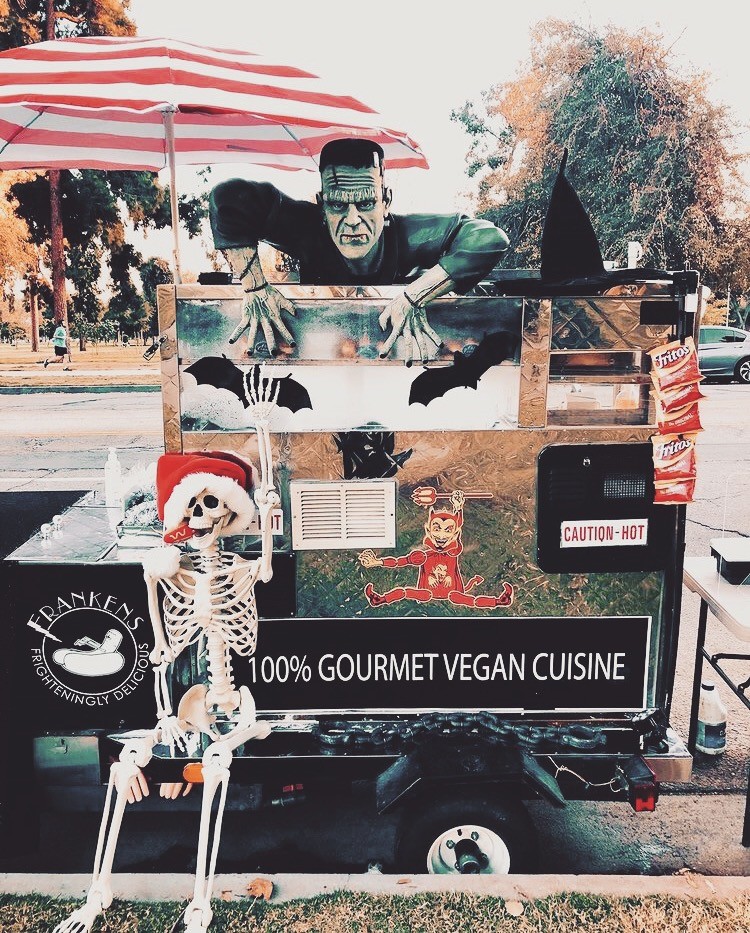 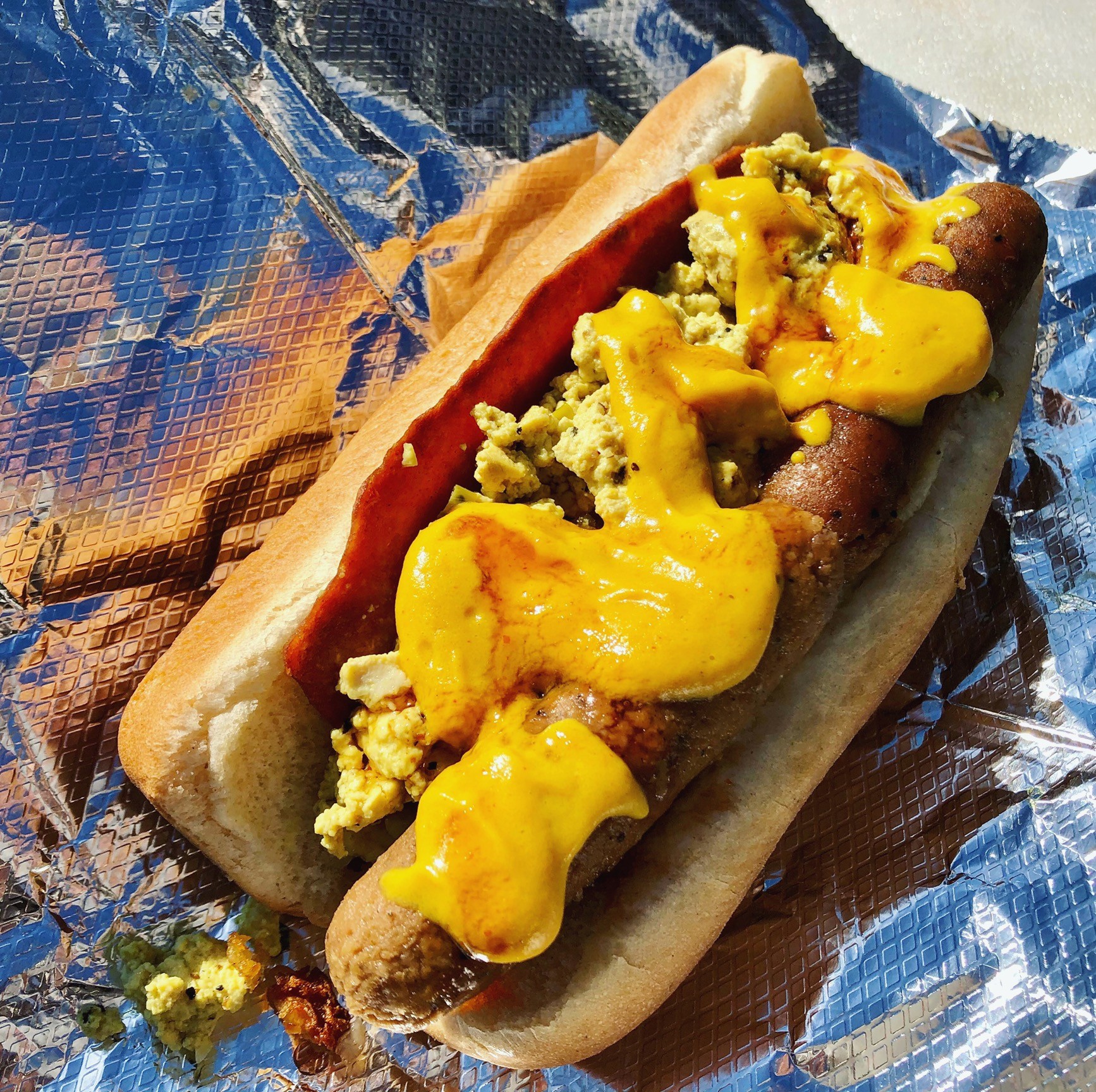 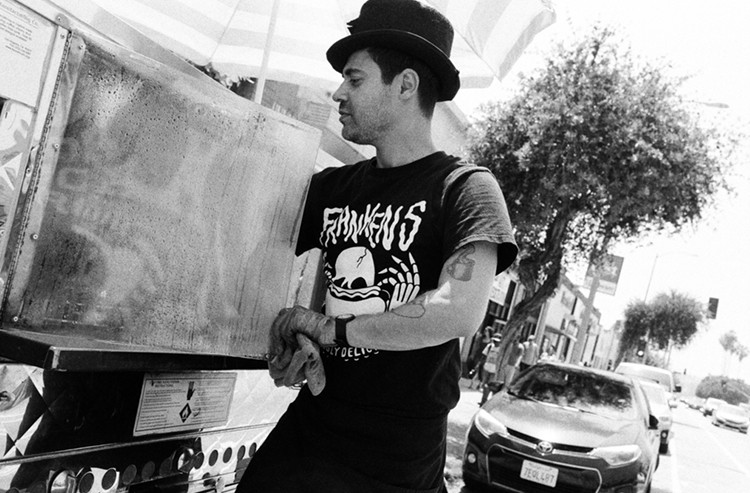 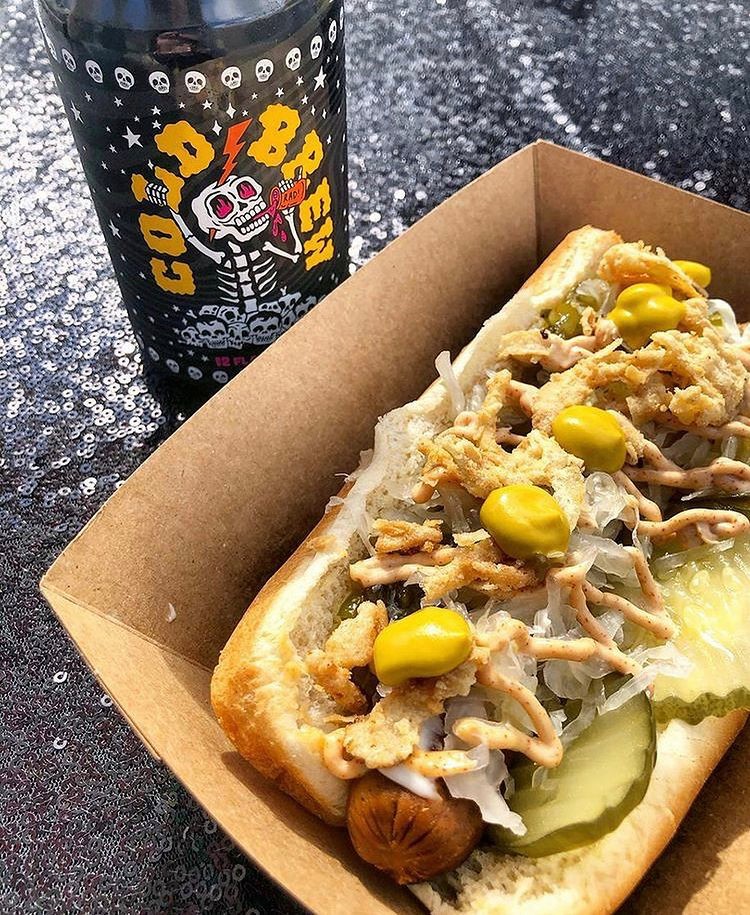 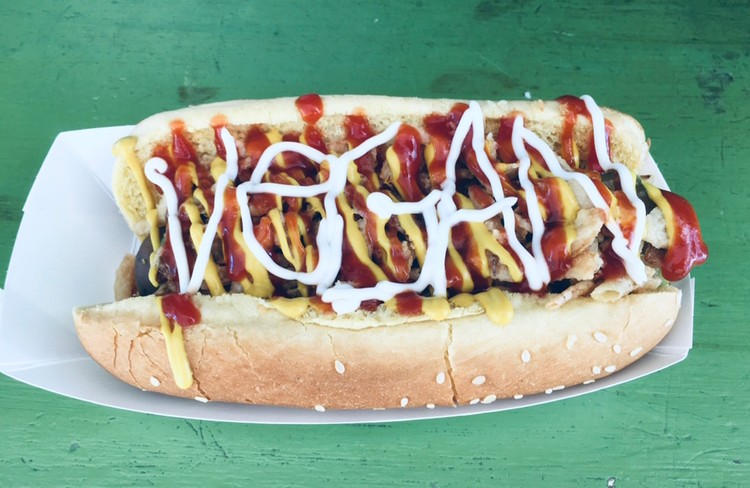 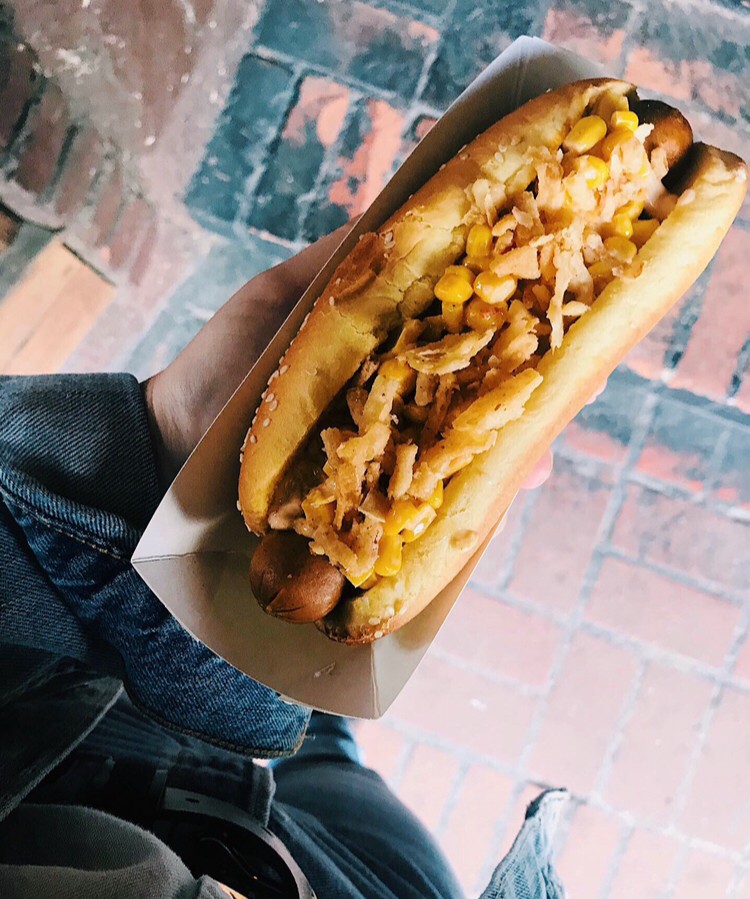 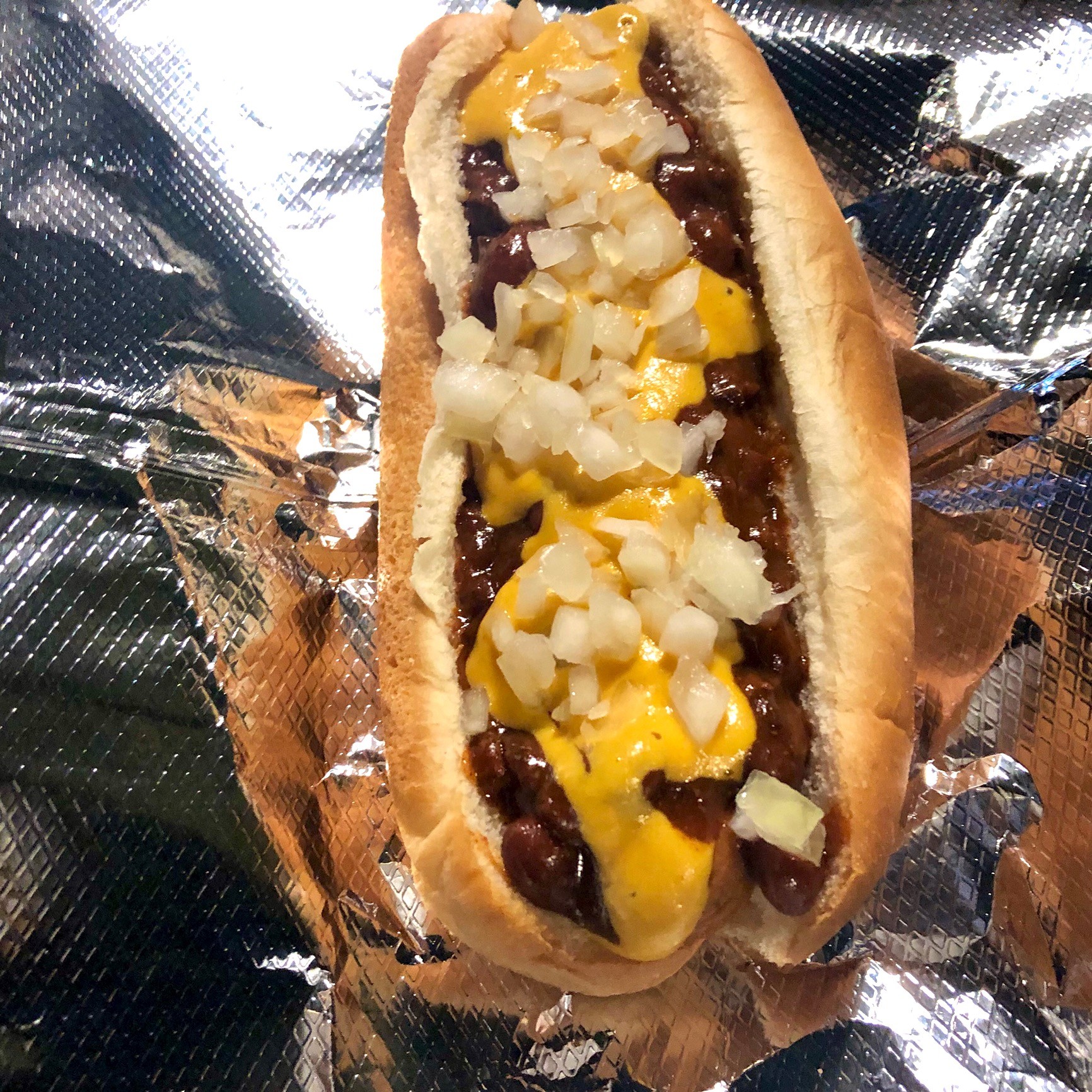