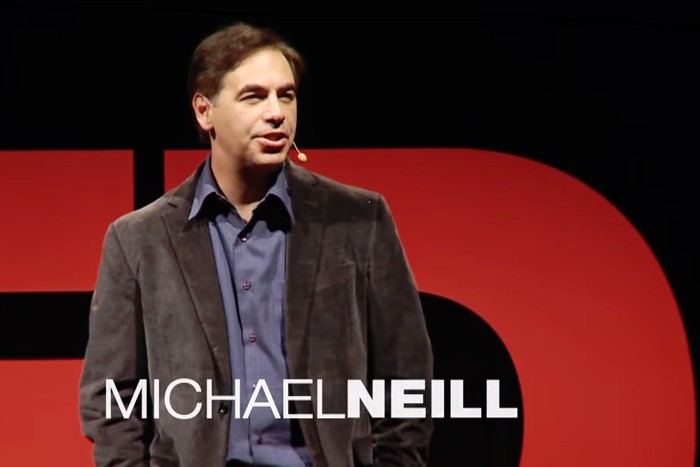 Today we’d like to introduce you to Michael Neill.

Hi Michael, so excited to have you with us today. What can you tell us about your story?
I was born in Massachusetts, went to university at SMU in Texas, and then a year abroad in London to study theatre turned into a marriage, family, and career. About seven years later, I starred in a BBC sitcom called “Satellite City”, which was winner of a Welsh BAFTA and voted best English language comedy of the 20th century but was never seen or heard of outside of Wales.

When the show finished its final season in 1999, I had a sudden and overwhelming vision of moving to LA, which had never been on my radar and certainly wasn’t on the radar of my wife and two small children. I had assumed it was to continue my career as an actor, but it was my other career as a coach and catalyst that began to take off. We settled into the valley, and have now lived in five homes (and had a third “American” child), all between Topanga Canyon and Tarzana.

In 2005, while performing at a comedy festival in Chicago, I had my next career epiphany. My dream job at that point in my life would have been to work as a writer/performer on Saturday Night Live. After an encounter with a cab driver named Adolf that I wrote about in my first book “You Can Have What You Want”, I was invited to stay on in Chicago with the possibility of working with Second City, one of the feeder companies for SNL. My first thought was that I missed LA, missed my family, and wanted to go home. And so I did.

That first book wound up number one on the UK bestseller list (just ahead of Michael Connelly’s “The Lincoln Lawyer”), and some 15 years later my six books (led by one called “The Inside-Out Revolution”) have been translated into 26 languages and continue to find their way around the world.

My performance background and insights into the links between human psychology and spirituality introduced me to a wider audience through the TEDx talk “Why Aren’t We Awesomer?”, which along with a second talk called “Can a TEDx Talk Really Change the World?” have been viewed by over two million people.

In 2002, my wife and I stumbled across our dream house off dirt Mulholland but couldn’t begin to afford it. We jokingly promised each other that if it ever came back on the market we would buy it. In 2019, it did, and we did, and we wake up every morning looking out over the valley and marveling at where life has taken us over the past 30+ years.

We all face challenges, but looking back would you describe it as a relatively smooth road?
One of my mentors, the Scottish mystic Syd Banks, used to say that “life is a contact sport”, and that’s certainly been true for us. From mental and physical health issues within the family to the inevitable ups and downs of running your own business, there have been times where life seemed not only unfair but a little bit cruel.

But in a strange way, because I had struggled with depression and suicidal ideation for so much of my adolescence and early adulthood, I found “adulting” a bit easier to handle than I might have had I experienced a blotch-free childhood. Through it all, my relationship with my wife and kids has been the touchstone that keeps me from drifting too far off the track, and the words “patience and humor” have gotten us through more difficult times than people who look at our admittedly fortunate life can imagine.

Great, so let’s talk business. Can you tell our readers more about what you do and what you think sets you apart from others?
In 2007, I turned my solo practice into a training/coaching company called Genius Catalyst Inc. Since that time, we have developed a multi-media arm of the company under the umbrella name of “Caffeine for the Soul”, sharing podcasts, online workshops, and self-study programs designed to wake people up to the deeper dimension of life in the midst of the challenges of business and daily living.

The podcast is approaching its two millionth download, and I continue to actively explore the meeting point of the profound and the practical – the space where our humanity and divinity collide.

Where do you see things going in the next 5-10 years?
Since my book “Supercoach” (and coach training school “Supercoach Academy”) put me in the thick of the life/business coaching conversation, I’ve seen two shifts happening simultaneously. On the one hand, coaching has become a far more accepted format for difference-making than ever before, and business leaders proudly talk about having coaches instead of treating them like a “dirty little secret weapon”. On the other hand, as the industry has gained in legitimacy, internet marketers have proliferated alongside, offering “certifications” for as little as $99 in a weekend and promising unsuspecting new coaches the opportunity to “make a fortune in their spare time from the comfort of their homes.”

Having worked professionally as a coach since 1990, I can say that while coaching isn’t brain surgery, it’s a heck of a lot closer to that than it is to multi-level marketing or other fields with no barrier to entry and no real training required. For people who want to make a real and tangible difference in the lives of others, it is the most rewarding career path I have ever walked; for people who are looking for their next side-hustle or get rich quick scheme, it usually ends in disappointment.