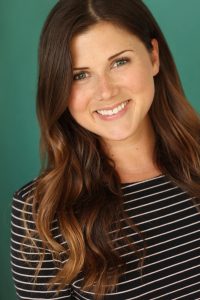 Today we’d like to introduce you to Gracie Lane.

Alright, so thank you so much for sharing your story and insight with our readers. To kick things off, can you tell us a bit about how you got started?
I wanted to be an actress my whole life. I started onstage when I was eight years old and eventually made my way to LA to attend UCLA when I was 18. Like many aspiring actors, I worked in a restaurant during college, and in the years after while I pursued my dreams. Though perhaps unlike many, I had already been working in a restaurant for 12 years.

As a pre-teen, I had gotten a job in a local deli filling to-go salad dressing containers for a couple of hours on Saturday mornings so I could save up my own money. I eventually became old enough to work behind the counter and then waitress. So by the time I was 24, I was totally burnt out on the server life. I figured I was organized and liked running errands, so I should be a personal assistant, but I had no idea where you found those jobs, so I put an ad up for myself on Craigslist. I got my first client the next day and kept gathering clients who I would work for part-time, but long-term, over the next seven years, and being a personal assistant was how I supported myself as an aspiring actor. One of my clients over the years was the founder of a snack start up and I eventually grew with her company and became General Manager, which introduced me to startup life. In the spring of 2019, I hit a wall with acting, or really, with Hollywood. I just didn’t want it anymore. I had always liked business – I treated being a personal assistant as my business, and I’m someone who charged my younger sister for hand-me-downs – so I thought I would apply to business school. I applied to USC Marshall 2 weeks before the deadline and was accepted a month later. I started working on my company, The Middle, an online platform for part-time personal assistants modeled after my own experience within the first month of grad school as a class project, and have been building it ever since.

We all face challenges, but looking back would you describe it as a relatively smooth road?
Yes, it’s always been super smooth! Being an aspiring actor is the easiest, haven’t you heard?! Ha, no, it most certainly has NOT always been a smooth road. I have sacrificed stability for pursuing my ambitions my entire adult life. I may not be in Hollywood anymore, but now I’m aspiring to do something just as hard – arguably, harder – building my own business. It’s actually been the hardest thing I’ve ever done in my life. Not just because I’m still in grad school, and still hold a job as an Executive Assistant, and am building The Middle, AND it’s been a pandemic (!!), but because it’s all on me. I’m a solo founder. I bounce ideas off my apartment walls, and occasionally, my very uninterested cat. I have no blueprint for how to do this. Every day I make decisions based off my gut because I don’t always have somewhere else to turn. The learning curve is steep, but luckily, I love solving problems.

What does success mean to you?
Oof, tough question for a perfectionist. I think success, for me, is making things that I want happen. Or at least giving those things my all until I don’t want them anymore. There were plenty of times I wanted to give up on acting, but I *wanted* it so badly, I could never quit. It wasn’t until I stopped wanting it that I stopped doing it, and I feel satisfied in the time I spent pursuing it. And that costar role I booked after eight years of auditioning helped too ;)! I apply the same mentality to building The Middle – I *want* to build it. It’s something I wanted when I was a personal assistant searching for jobs, and if I can actually produce that thing that I want, I’ll feel successful, even if the business isn’t a success (but that won’t be the case if I have anything to do with it!)