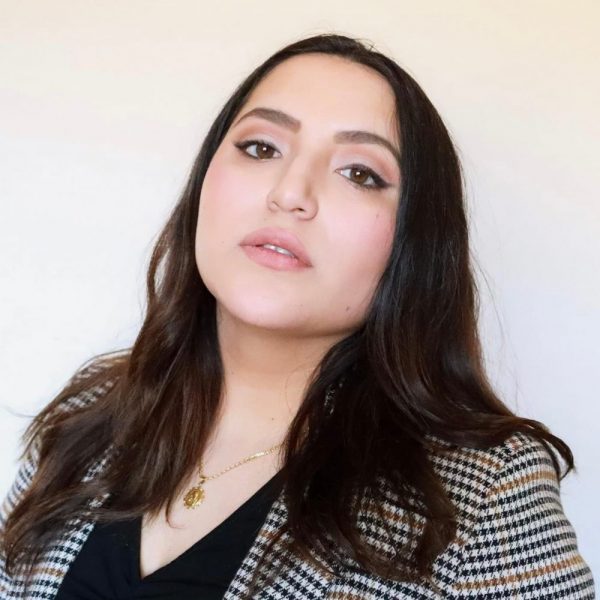 Today we’d like to introduce you to Maritza Cruz.

Hi Maritza, thanks for joining us today. We’d love for you to start by introducing yourself.
My name is Maritza Cruz, and I am a Chicana director, screenwriter, and production designer. As a Mexican American woman, I come from a long line of storytellers. I remember sitting at the dining room table and listening to my family exchange stories and chistes (jokes) about their life — our laughter slamming against the adobe brick walls. I guess in a way most of my childhood was spent like this, so I knew I wanted to tell stories in some way. I used to write short stories about anything and everything I could imagine — a magical world hidden inside the Mesquite tree out back, an Ant Queen reigning over her kingdom. These fantastical worlds allowed me to escape when things got tough, so it’s no wonder that this genre still appeals to me today. But following your dreams and diving into something uncharted can be scary. I fought my dream as I got older and thought the more practical route to storytelling would be journalism. I worked as a journalist for a few years and received a B.A. in Journalism from the University of Arizona. Though I loved being able to meet new people, I still felt like something was missing. After taking a year off, I realized I was ready to take the plunge and really “go for it.” I owed it to my childhood self. I applied to graduate film schools around the country, not expecting to get in. To my utter surprise and delight I was accepted into my first-choice school, the University of Southern California School of Cinematic Arts, one of the top film schools in the world! I was also selected as a George Lucas Scholarship recipient and could not be more grateful and lucky for the opportunity to pursue my dream.

We all face challenges, but looking back would you describe it as a relatively smooth road?
I’m the first in my family to go to college, so navigating these new spaces in academia, film, and Hollywood have all been new experiences for me and my family. My parents grew up in a time when kids used to have their grades lowered for speaking Spanish on the playground. They were never given the permission or guidance to dream big. There were no college counselors back then, at least not for them. They weren’t given the same opportunities and choices I was, so naturally none of us knew about things like the SAT or applying to college. We certainly didn’t have any connections to Hollywood or the entertainment industry. So sometimes I had to figure it out myself which included a lot of trial and error in the beginning. Though, I’ve been fortunate to have many mentors by my side who helped me along the way like Professor Susan Swanberg from the University of Arizona School of Journalism and many friends and family members’ support and encouragement. My parents have been especially supportive, and I’m lucky that they’ve helped me in any way they can to get me to where I am today. I couldn’t have done it without them. They’ve given me the greatest gift of all by allowing me to dream big and go after what makes me truly happy. Ever since I was a little girl they never quelled even my biggest dreams, no matter how ridiculous, because they always believed I could do anything I set my mind to. They believed in me before I did and for that, I’m so lucky to have them.

Thanks for sharing that. So, maybe next you can tell us a bit more about your work?
I am a budding screenwriter, director, and production designer but above all, I’m a Latina storyteller. While pursuing my M.F.A. in film and television production at the University of Southern California School of Cinematic Arts, I’ve decided to specialize most of my work in screenwriting and directing. I’ve recently finished a comedy directing class at school with Emmy-winning director, Barnet Kellman, so I aspire to include a little bit of comedy in everything I do. I’d love to write and direct films about magical realism, indigenous folklore and family relationships within the Latine community. I feel like we haven’t seen much exploration of the fantasy genre lately, and most of what we do get is quite Eurocentric. I love classics like Lord of the Rings and Harry Potter but instead of trying to replicate something good, I think we should be finding new stories to tell. The great thing is it seems to pay off — just look at the success of stories like Get Out, Encanto, Coco, and Everything, Everywhere, All at Once. I didn’t see many heroes that looked like me growing up, so I hope to create stories where Latine children and young adults can see themselves portrayed on screen in a nonstereotypical way — with all their complicated, multidimensional, and diverse personalities and experiences. Recently, my first short film, Acid Trip, was selected as part of the foreign film shorts category at the 24 Risas Por Segundo Cine y Comedia Festival in Mexico City. It’s a dark comedy about a young woman who is trying to get rid of a dead body when the one person she can’t turn away turns up at her doorstep — her no-nonsense Abuelita. She fumbles to hide the evidence while her partner-in-crime and best friend returns from the store with a suspiciously large amount of acid. I’m really proud of this short, especially since it’s the first I’ve ever done with a crew. I could not have done it without their feedback and hard work, and more than anything I can’t wait to make more!

Any big plans?
I’m looking forward to writing and directing more shorts in the future. I’m taking a stop motion animation class this upcoming year to prepare for my thesis project that I plan to shoot in the summer of 2023. I’ll also be working as a production designer this summer on a short film, Eternidad, a horror film focused on a mother’s will to reunite with her children. I’m excited to work with this Latine crew and am looking forward to collaborating with more creative and passionate filmmakers in Los Angeles. It’s my favorite part of living in this city! 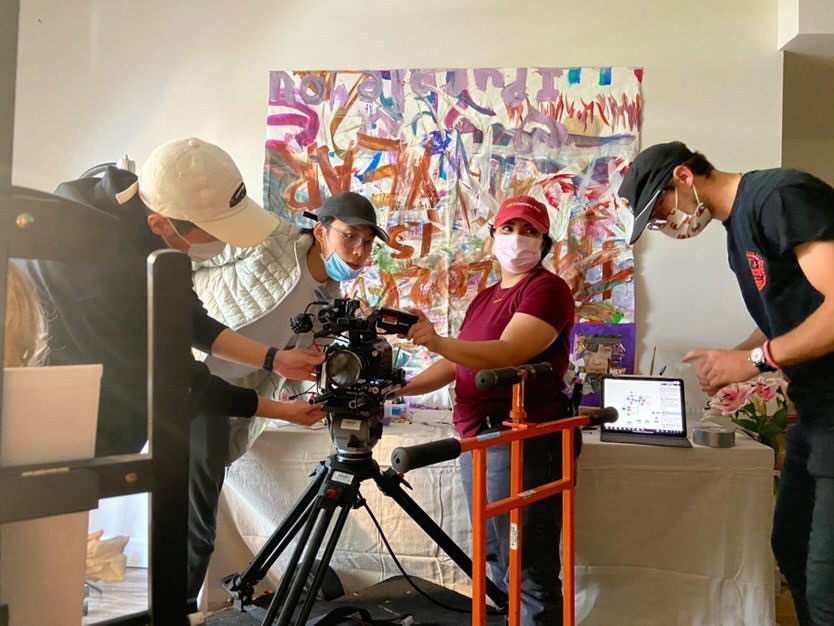 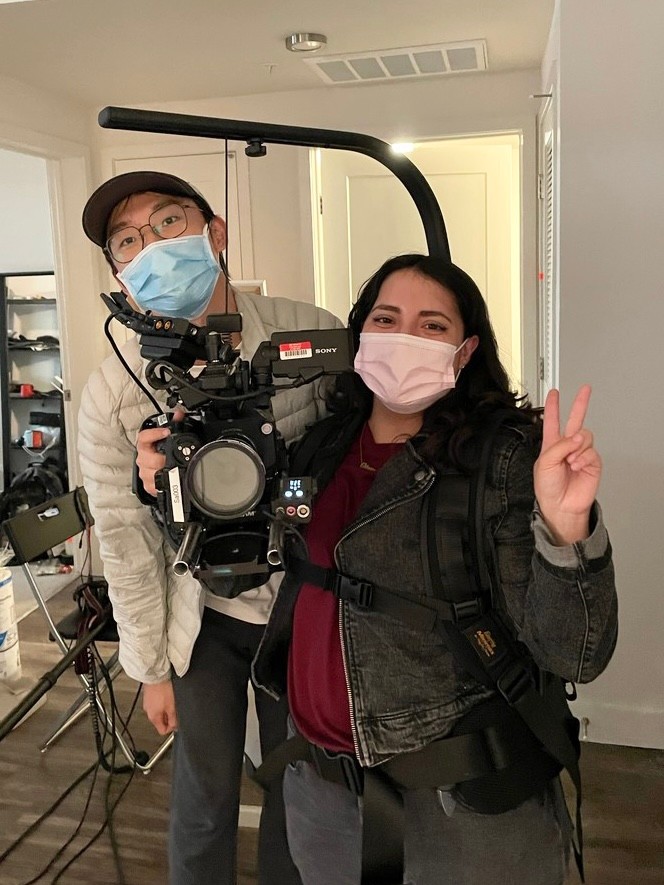 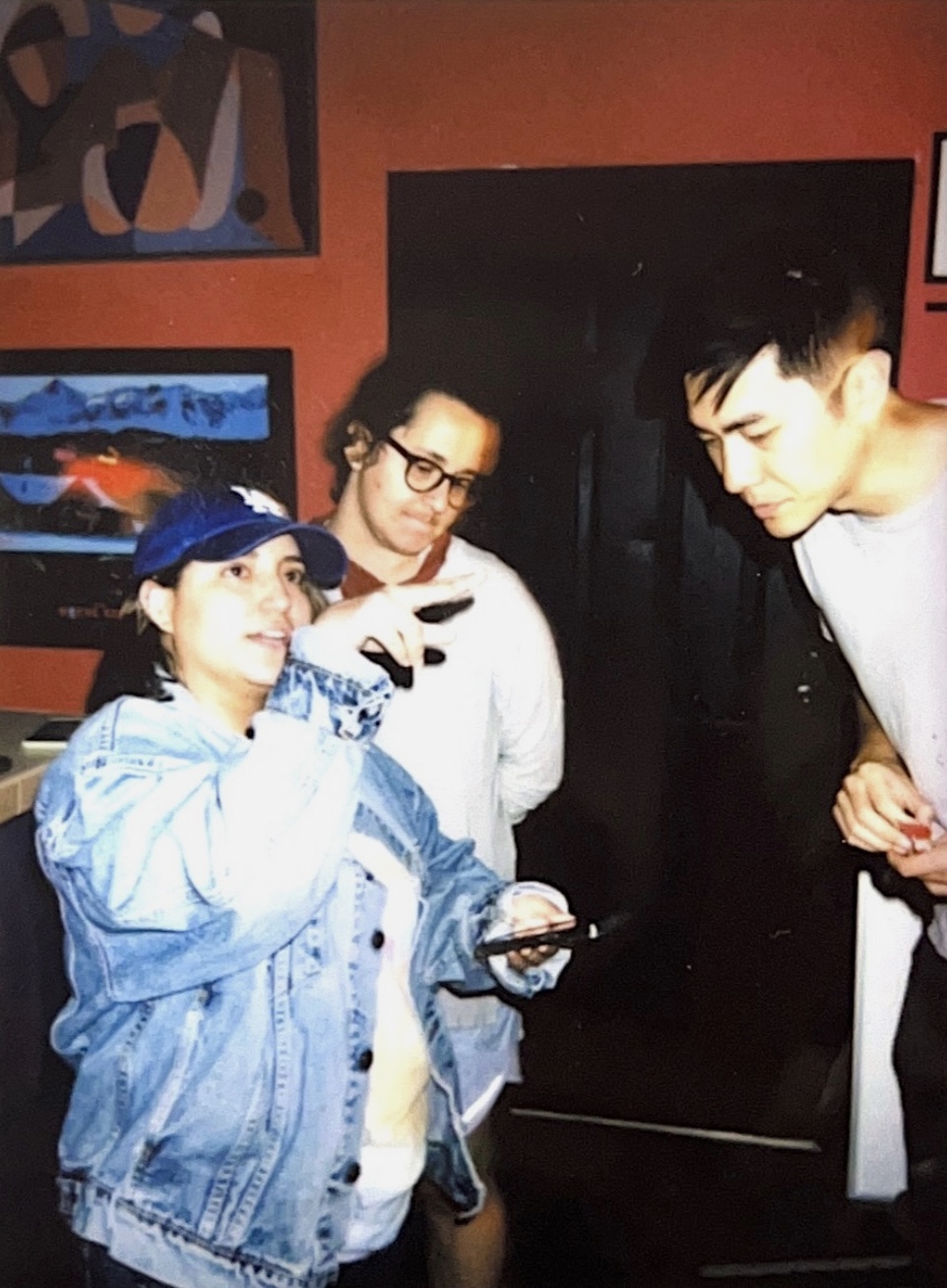 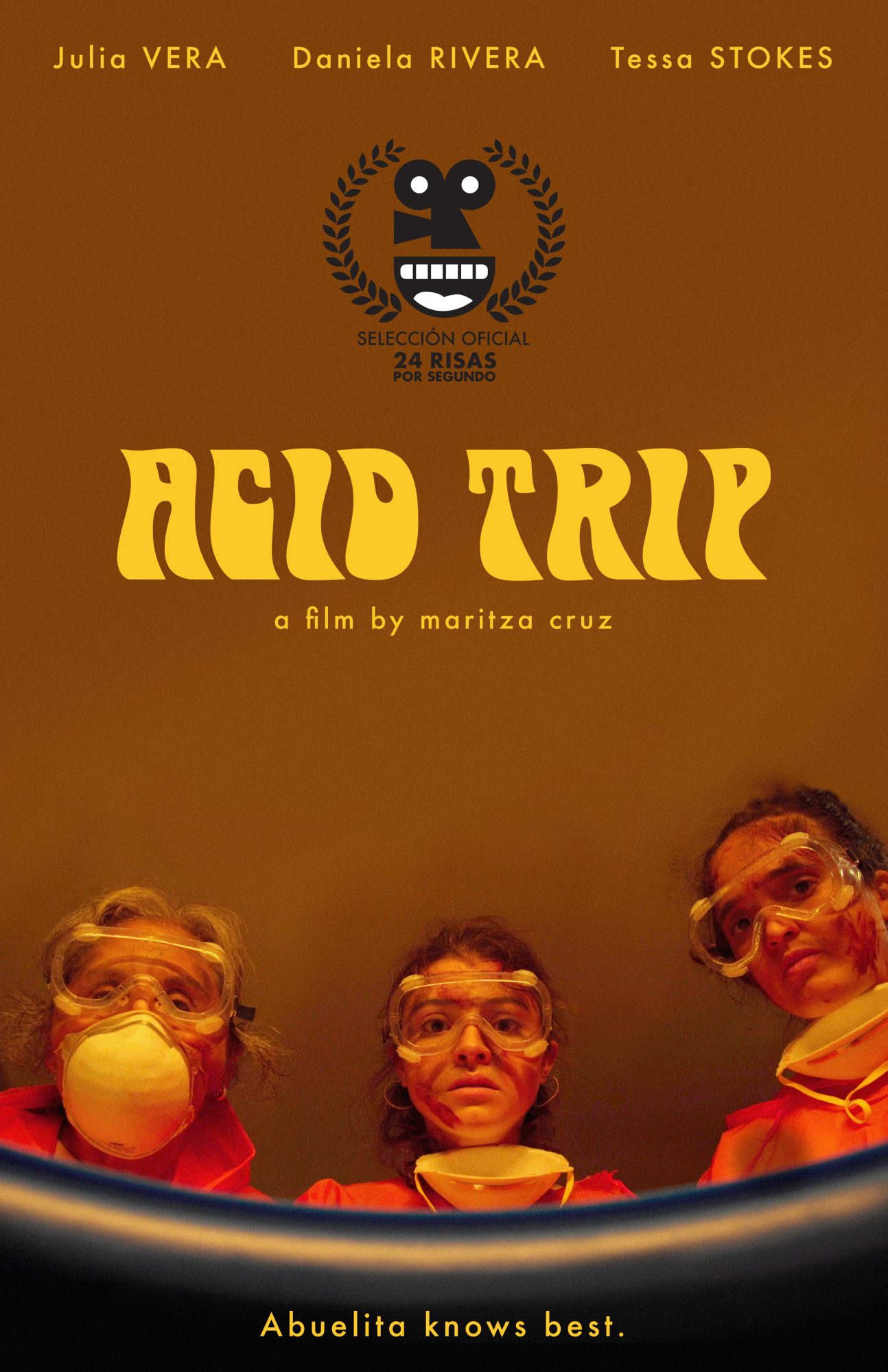 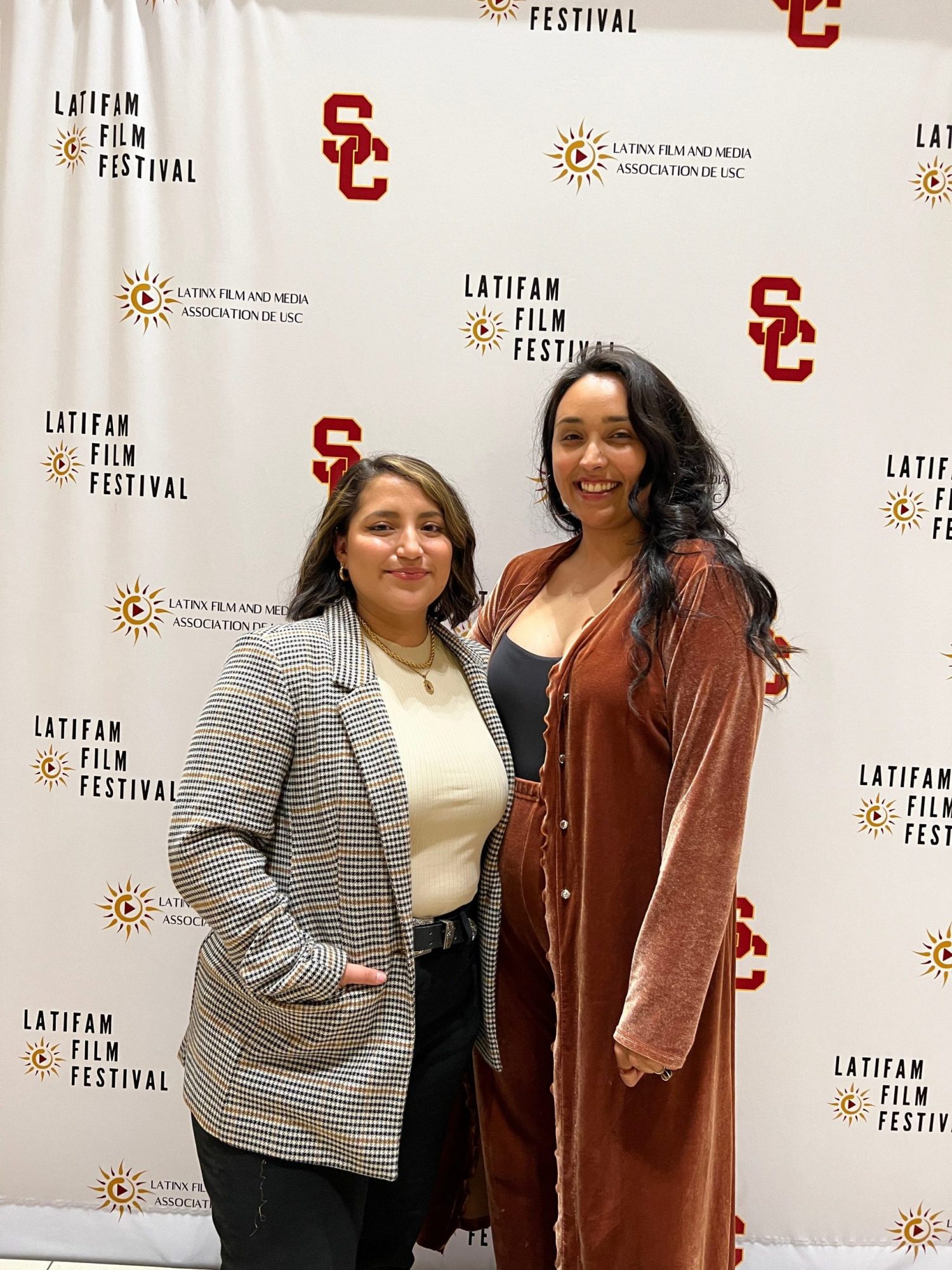 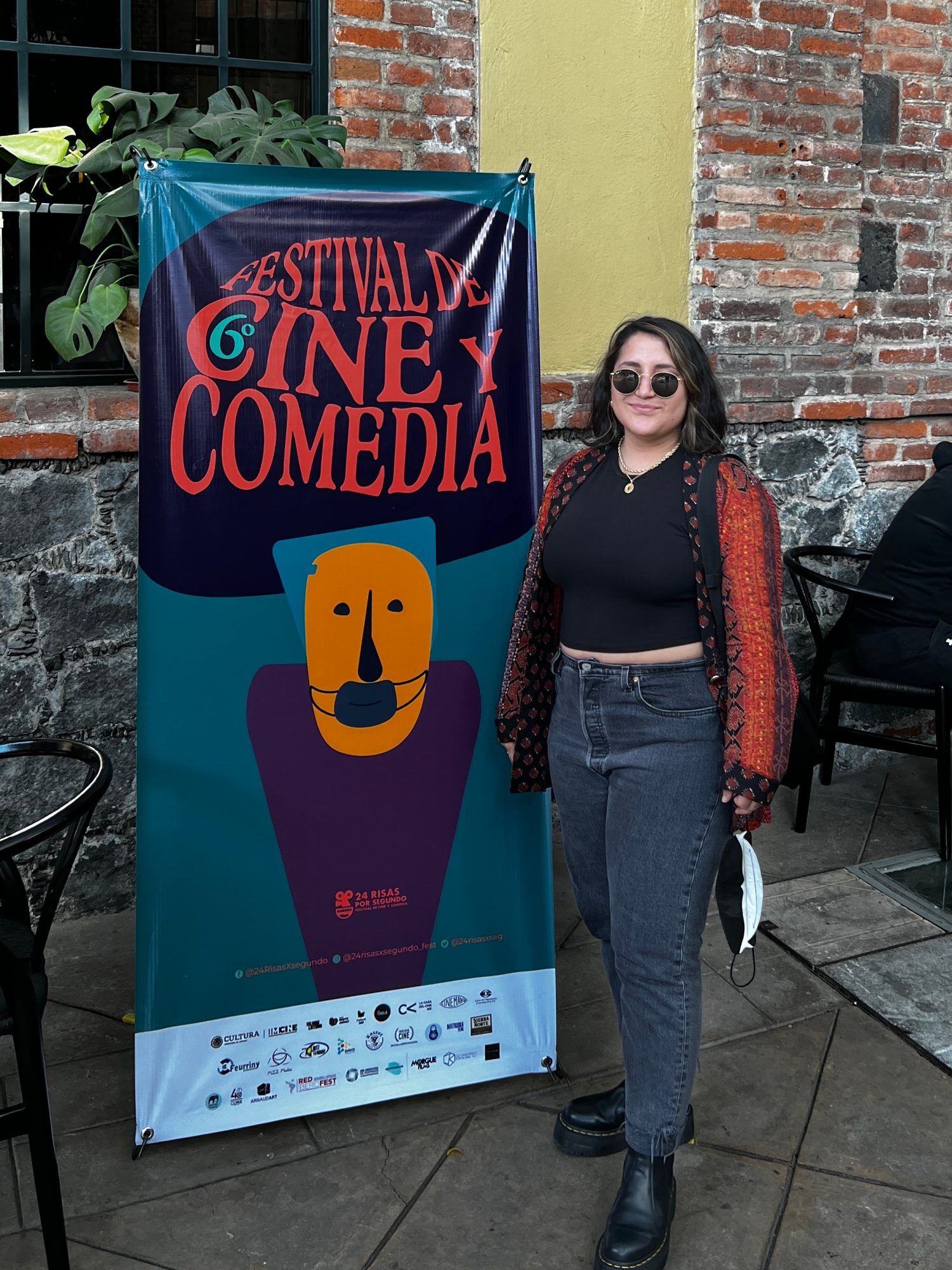 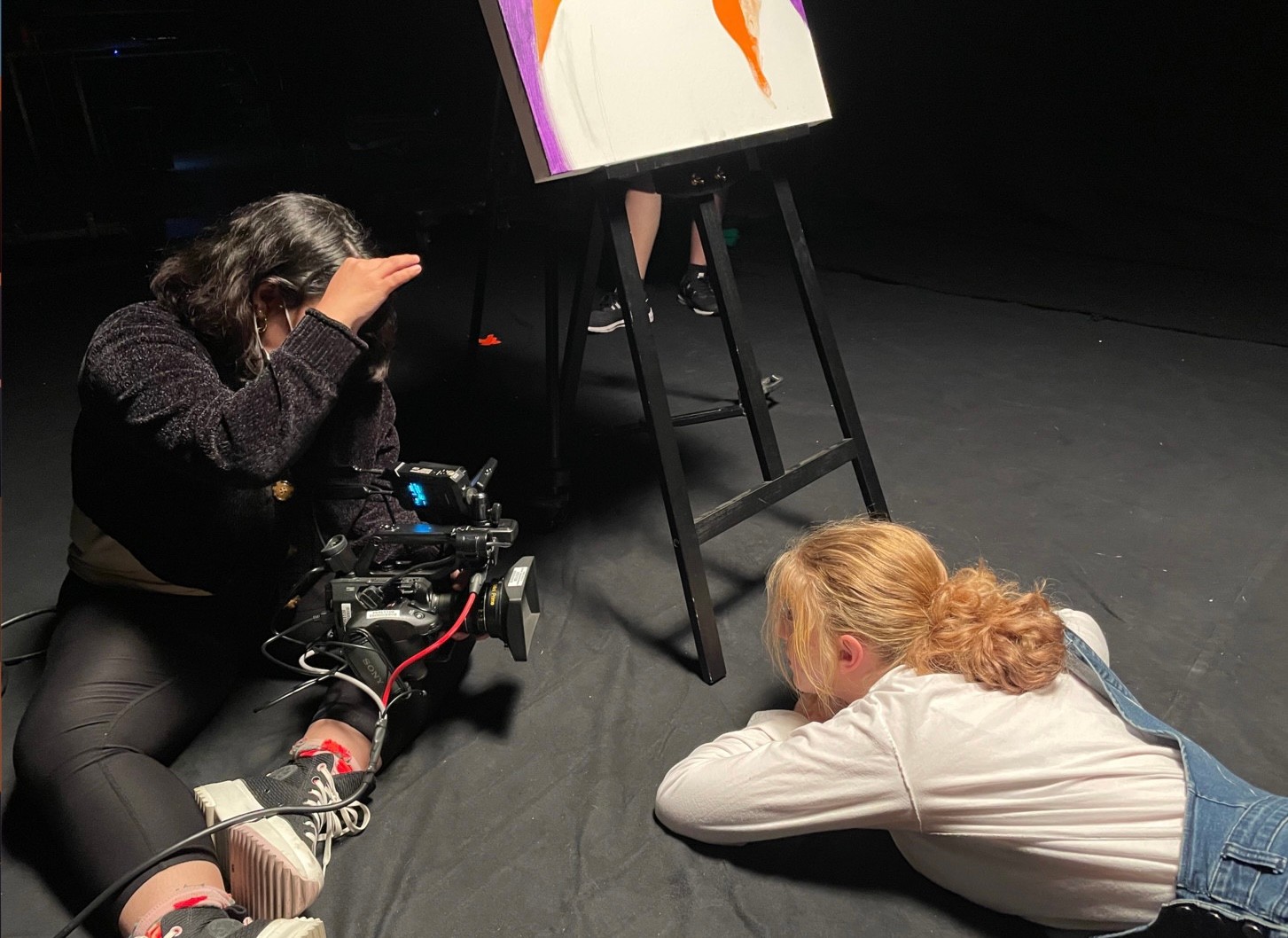 Image Credits
Personal Photo of Maritza working as a production designer should be Credit: Erynn Mitchell. The movie poster designer by Adeline Wang, @crushedoranges on IG.