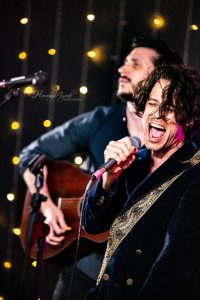 Today we’d like to introduce you to Make Magic (Alexander and Johnny). They share their story with us below:

Please kick things off for us with some background on your story.
Fifteen years ago… we met at a mutual friend’s backyard party. Alex was living in a converted garage behind the main house and the two men stayed up all night writing their first song. We discovered we had a great rapport along with a common love of music, movies, and stage magic. Johnny was producing music for a popular Spanish language kids show on PBS called Dos Y Dos and Alexander was working as a voice-over artist on animated TV shows: Teen Titans and Starship Troopers. There was a kind of instant friendship that happened that one can only call “rare and lucky” with collaborators.

Make Magic is more of a prankster invitation/invocation than a straight band name, it’s fun to think about people seeing it and saying it. What is magic? It’s so many things. It’s a trick, like a magic trick… an illusion, but it’s also the way in which people use their power, their creativity and their life force… if you can create something that changes your mind or other peoples’ minds, you can change the world. That is the magic we’re talking about…and telling stories and performing music is the best way we know how to spread that kind of magic.

“I think we have a unique sense of the dramatic, the theatrical and the mysterious.” – Alex

“To make music is one thing but Make Magic—well, I feel we’re creating something bigger than both of us.” – Johnny

We all face challenges, but looking back would you describe it as a relatively smooth road?
Los Angeles is one big obstacle, it’s a huge somewhat daunting metropolis with 40 million stories and 100 million directions to go. And we’ve gotten lost trying many of them…

Alex was working on art shows with sculpture and psychedelic watercolors and discovering himself, all while traveling and performing at festivals such as Burning Man, Lightning in a Bottle, and the sexy cirque troupe, Lucent Dossier. After that tour, he came back to LA and landed a lead clown part in the Cirque Du Soleil show Natal.

As a vocalist, Alex worked with mega-producer Don Was while singing backup for Billy Preston and Joachim Cooder and Warner Bros. artist Holly Palmer. He also wrote and recorded an unreleased album with producer Justin Gray in Toronto but ran into some disastrous issues with his music partner. Twelve hours before they were in the studio for their first recording session, his band partner had a psychotic break and disappeared. Although the label still wanted to move forward with the album, Alex knew his passion for music would never be fulfilled if he stayed in this tainted project. So, with his head held high, he walked away from a $2 million dollar recording contract.

Meanwhile, Johnny was doing featured extra work in major studio films and gaining some great experience with smaller acting roles and songwriting projects. Then, burned out and disenchanted, he took a crazy job managing a mattress store for three years. After becoming the top-selling salesman in the store’s history, he was surprisingly offered the actual store by his owner. Simultaneously, he began writing with a female singer-songwriter, and after a brief encounter with a manager in Nashville…the two almost moved across the country. However, after his production deal fell through, he decided to stay in Los Angeles for at least a little bit longer.

During this time, something completely unexpected occurred that indirectly changed the course of both Alex and Johnny’s lives. In 2018, a director approached them with the idea that the music from that very same song the duo wrote fifteen years ago would become the theme for his entire score. So quickly, they re-recorded “Dusty Feathers” while Johnny composed the score for the rest of the film.

Two years later, as Alex kept landing voiceover roles on shows like DC Superhero Girls and Baby Shark’s Big Show and Johnny worked his day job of producing educational Hip Hop music for a tech startup, the positive buzz for “Dusty Feathers” kept growing. Then Johnny woke up one day absolutely miserable as he questioned why he was working a job that didn’t appreciate nor utilize his strongest talent: his creativity.

So in December of 2020, Johnny approached Alex with the idea of turning their one little song into a full-fledged project. They both agreed to release “Dusty Feathers” and gave themselves the name that would officially bring them back together again… MAKE MAGIC.

As you know, we’re big fans of you and your work. For our readers who might not be as familiar what can you tell them about what you do?
We perform songs that we write together. We enter into venues and light them on fire. Lyrically, we look into our own hearts/minds and extract something meaningful for our audience without fail. This is our life’s work, this is our gift. Indie or alternative rock duo is what you may call what we do, but right now it’s just us two… and we know this is just the beginning.

We feel “larger than we really are”… if that makes sense. It’s a big thing, a dramatic thing we do, so largesse is something we deal in, along with expansive storytelling, emotional impressionism, character and massive heart energy. We are known for our rapport and our onstage relationship. We’ve known each other for 15 years, so the communication and friendship is strong.

In the simplest of terms, we are good at making our music. When it feels good, when you are standing on the edge of your ability, and you feel safe to jump off the edge, you want a great partner to have your back. We’d love Make Magic to be known as a kind of mystery library, an uncommon story generator and the band you’d like to see on your birthday… every year.

The crisis has affected us all in different ways. How has it affected you and any important lessons or epiphanies you can share with us?
Indirectly, the pandemic was the reason we formed Make Magic. We both needed a change in our daily lives that evoked a different side of us that had laid dormant for too many years. Alex was itching to start a new music project while Johnny was desperately seeking to regain his creative freedom. The band came at a perfect time for them to investigate if this mysterious idea could be transformed into something different, something special, something magical… 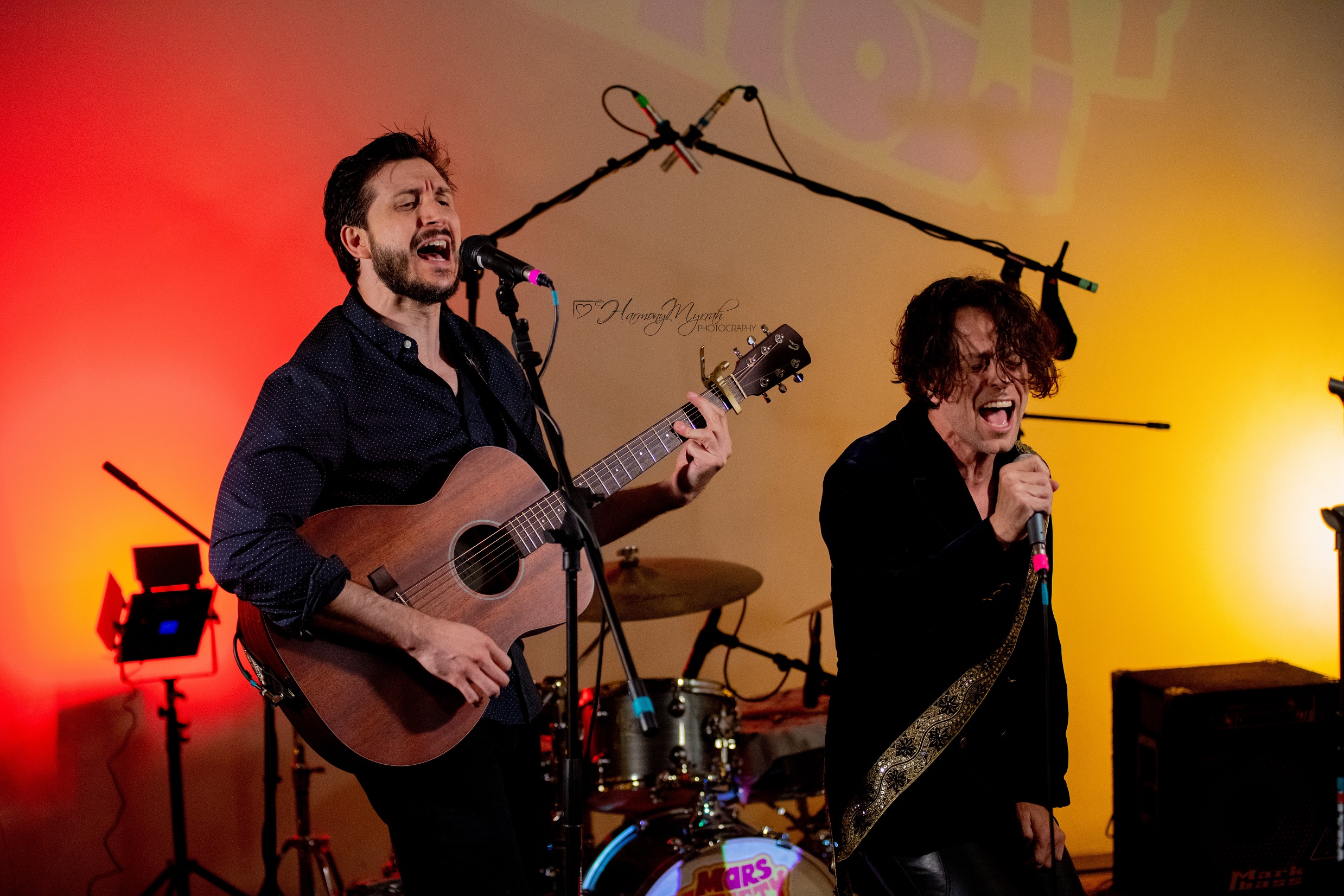 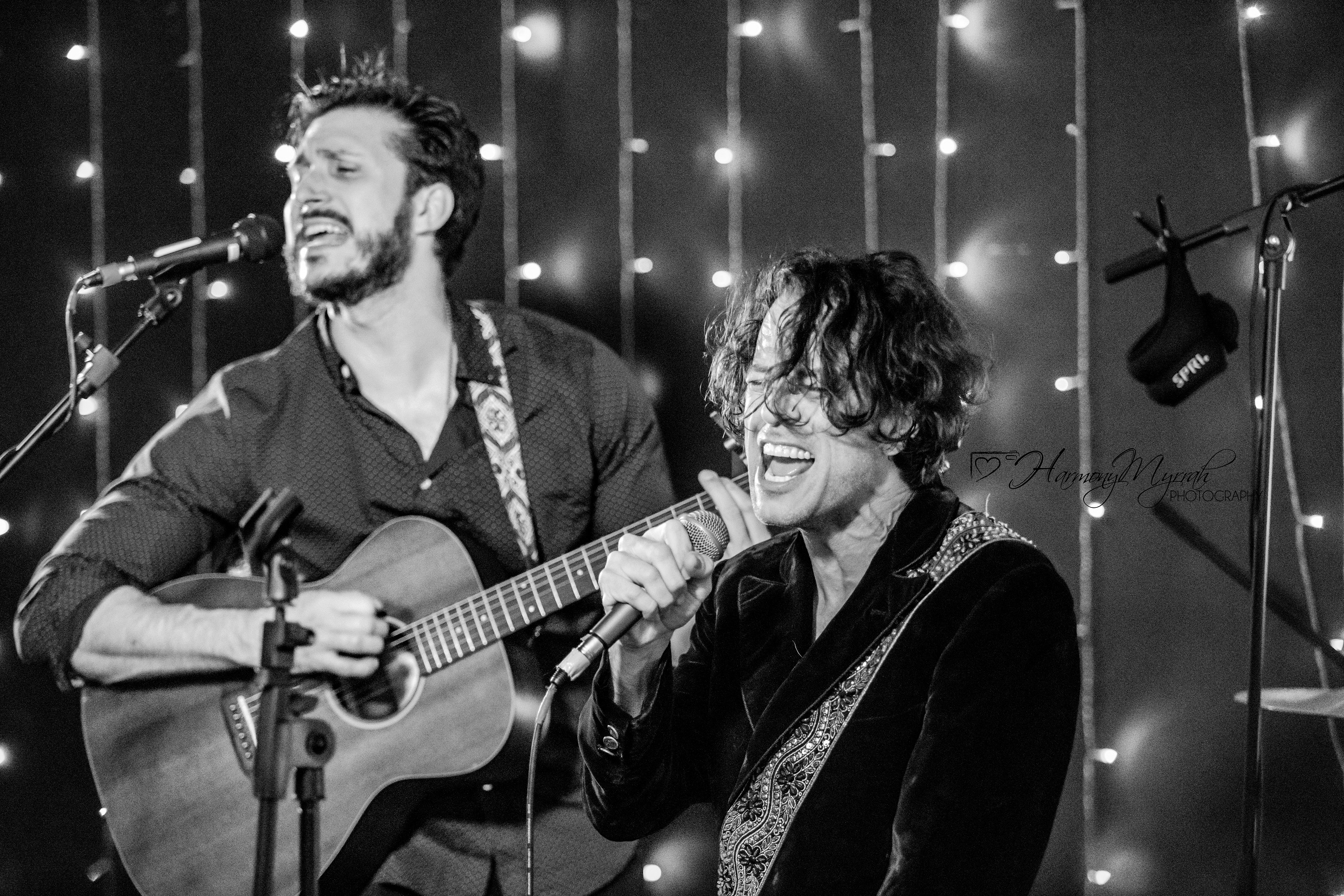 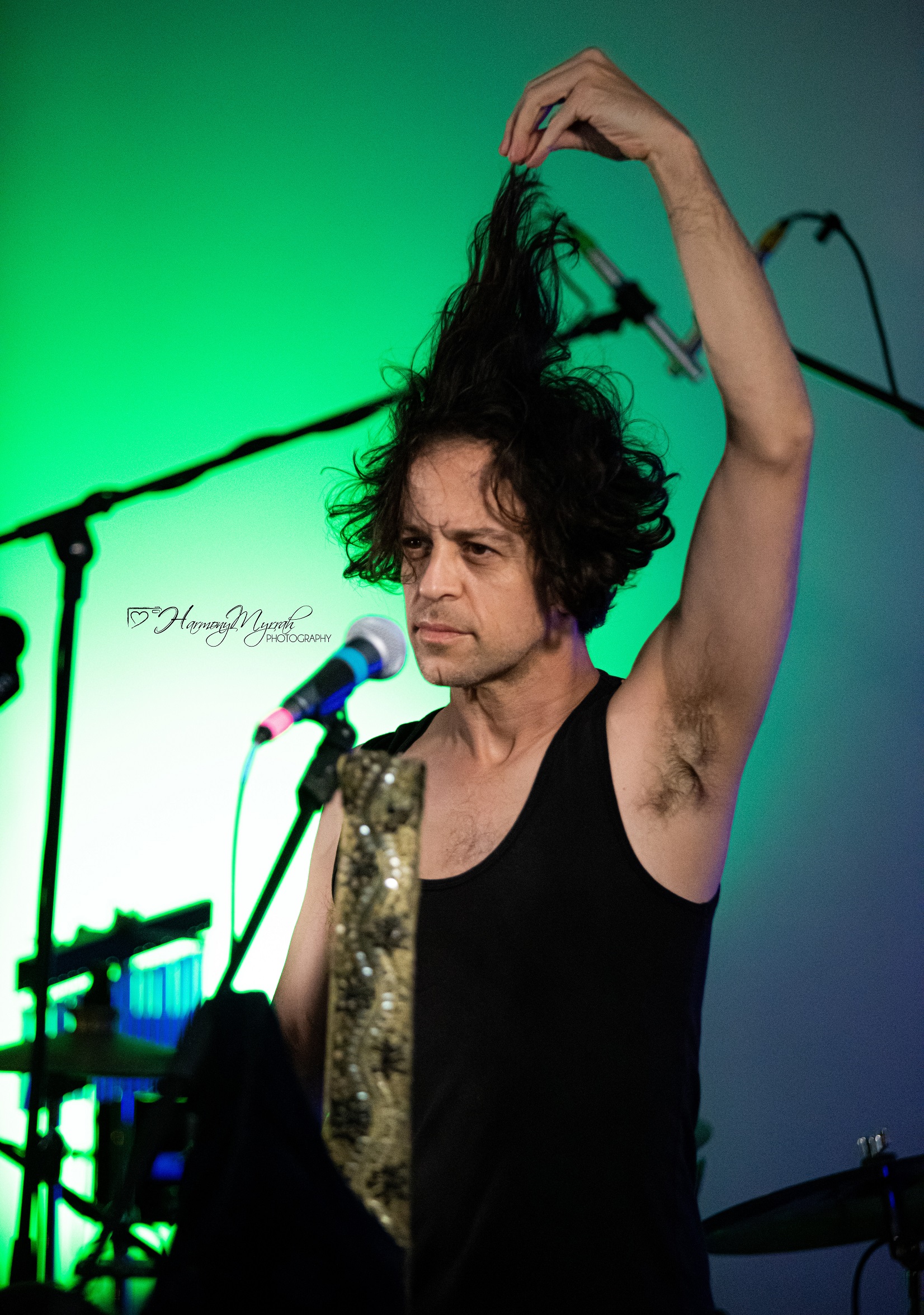 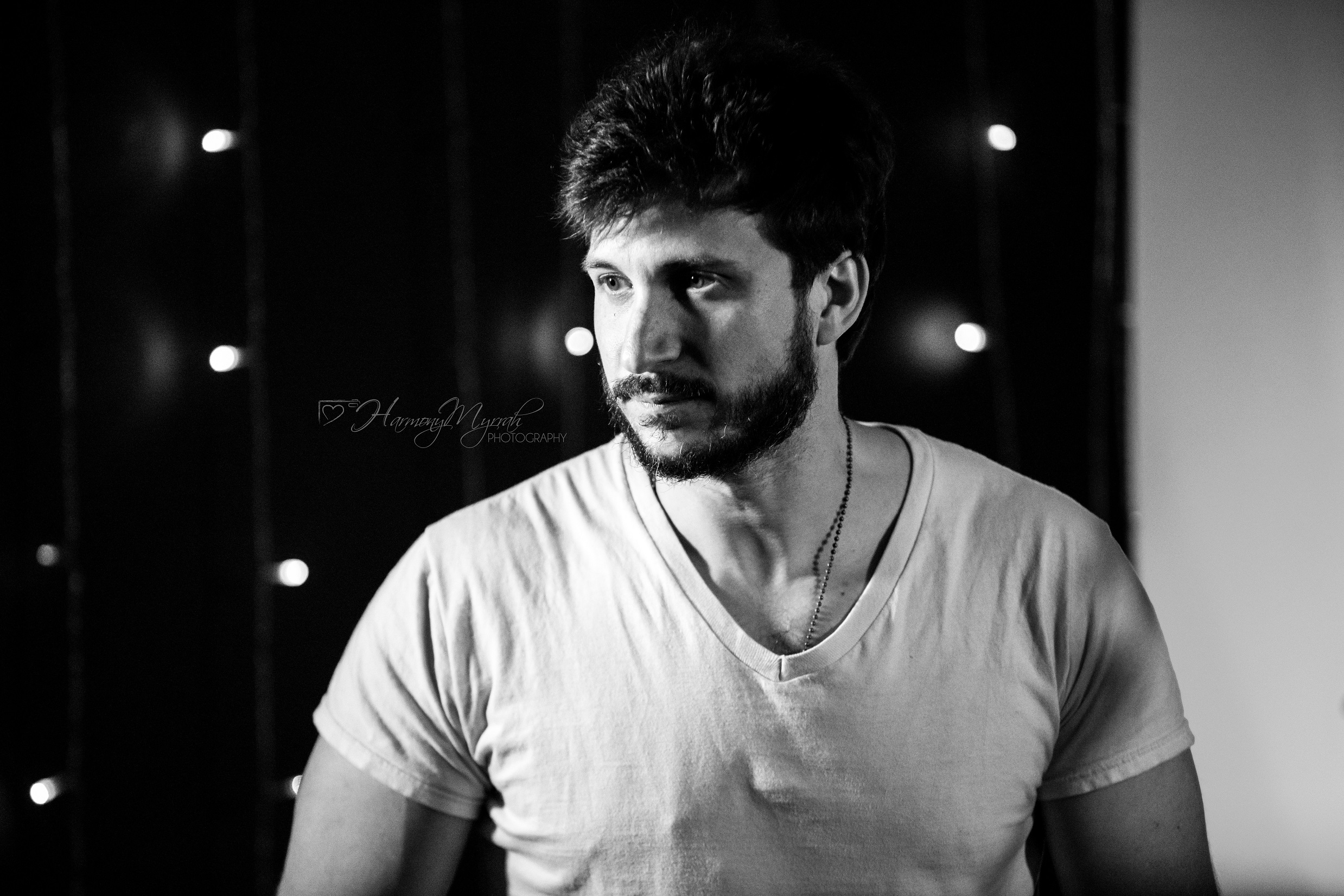