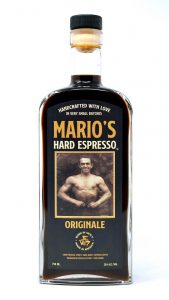 Today we’d like to introduce you to Joseph Grasso.

Hi Joe, so excited to have you with us today. What can you tell us about your story?
Hi Everybody. For about 50 years my Dad, Mario, made and bottled his Hard Espresso every Christmas season and gave them out as gifts to family and friends. If you were lucky enough to get one, you cherished it as long as you could knowing it would be an entire year before you got a shot at another. When he passed away about ten years ago, I decided to keep the tradition alive in his honor. About four years ago, we thought we could improve it a little by tweaking the recipe just a bit, better ingredients, less sugar, increased ABV, that sort of thing. We really loved where we landed and so with the help of our entire family for the last four years, we’ve been working to bring Mario’s Hard Espresso to market. It’s been pretty crazy.

We launched in November 2021 and so far the response has been fantastic. Generally, when people try it, they love it. We’re being carried by a number of restaurants, bars and specialty-spirit retailers in and around Los Angeles, San Diego, San Luis Obispo and Sacramento, and we could not be more proud and humbled to be included in their portfolios.

The other thing that’s totally blowing our minds is how versatile Mario’s is. We’ve been seeing bartenders all over LA using it in new ways to create all kinds of amazing craft-cocktails. From Hard Espresso Martini’s and Negroni’s to blending Mario’s with Whisky and Mezcal. It’s been incredible to be a part of and super delicious too!

Each bottle of Mario’s contains my Dad’s secret Sicilian recipe and the planet’s best natural ingredients including Triple Distilled Neutral Grain Spirit, 100% Arabica Dark Roast Espresso, Organic Madagascar Vanilla and real Cane Sugar and we handcraft each one in small batches with the same love and care he put into every one of his. We’re a small, family run spirit label doing it all ourselves in honor of my Dad, pretty awesome.

Can you talk to us a bit about the challenges and lessons you’ve learned along the way. Looking back would you say it’s been easy or smooth in retrospect?
There have been a few struggles along the way, but mostly because we were determined that if we were going to do this, we had to do it right. We had to honor my Dad and make a product that he would be proud of. I mean, after all, he’s on the label! And so it took almost two years to find a distilling partner that was capable of using our original recipe, and scaling it up to be able to produce batches large enough to make it cost-effective. I spoke with over 12 different distilleries and got all kinds of conflicting information from “it can’t be done” to “you’ll have to use flavorings or artificial ingredients,” which for us was never going to happen. And then Covid hit, and most of the distillers we were speaking with shifted to making hand sanitizer and became too busy to accommodate a small spirit start-up like us. Eventually, we found our current partner, Liberty Call Distilling, a small craft distillery making incredible spirits in San Diego, and they’re awesome. We’re able to handcraft every bottle of Mario’s Hard Espresso using the recipe my Dad created while putting the same love and attention to detail that he put into every one of his. Mission accomplished.

Alright, so let’s switch gears a bit and talk business. What should we know about your work?
For the last 30+ years, my primary profession has been in the film/tv production industry as a freelance Director/Director of Photography. I say “primary profession” because in that time I’ve also been somewhat of a serial entrepreneur. I’ve been involved with the creation of television, feature-films, documentaries and theater as a Writer, Producer, Director and Cinematographer. I’ve also been involved in a number of non-entertainment business start-ups and products, some of which have gone better than others, but all of them invaluable as life lessons learned. I think all of that stems from the central belief that pretty much anything is possible. You just have to dedicate yourself to the process and find the path to getting it done. I Directed a documentary a few years ago that focused on a 90 years old African America sculptor that created incredibly large works from huge logs. When I asked him how he approached such a big project he told me, “I’m like a termite man. I just take one t bite at a time. You don’t have to eat the whole log all at once.” And so that’s been my mantra and what I try and do every day. Just take a small bite of the project every day. The other thing that’s been super cool about launching Mario’s Hard Espresso has been having friends and pretty much our entire family involved. My wife Becky and son Aaron, my daughters Sarah and Hannah, my brother Michael and niece Lauren, my long-time friend Archie, virtually everyone in our family has contributed in some way. And with all of us living and working here in SoCal, it’s really been a fun, local, friends and family project. I’m super proud of that.

The crisis has affected us all in different ways. How has it affected you and any important lessons or epiphanies you can share with us?
If I’ve learned anything trying to launch Mario’s Hard Espresso during the pandemic, it’s the power of persistence. So many times throughout the process it seemed like roadblocks were being erected. Whether it was distillery capacity, supply chain issues, ingredient or bottle availability. Whatever it was, they all just became another obstacle to overcome. To look at, understand, and find the work around. As I said earlier, one small bite at a time. And now here we are, producing my Dad’s Crazy Delicious Hard Espresso for everyone to enjoy. Pretty awesome indeed. 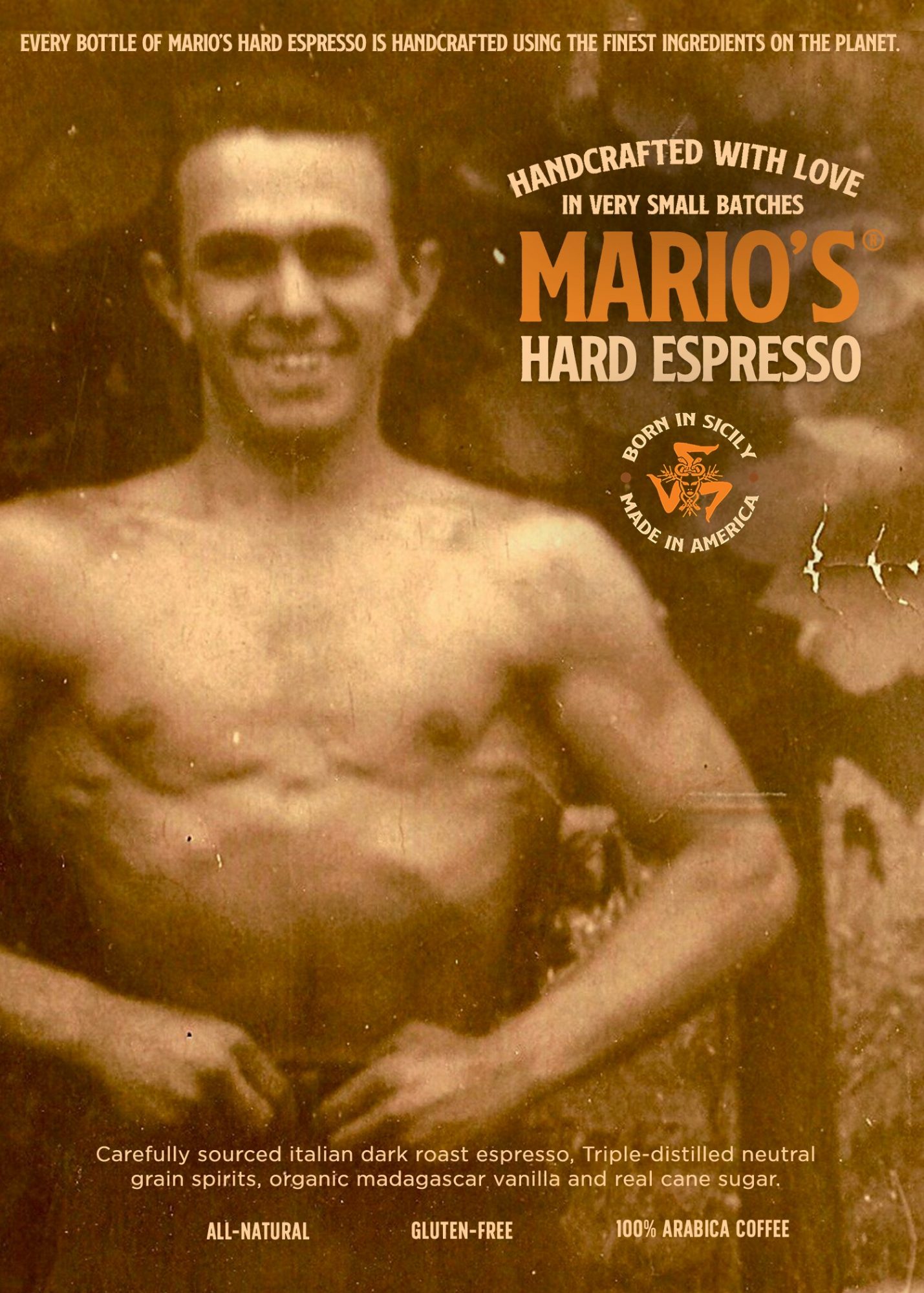 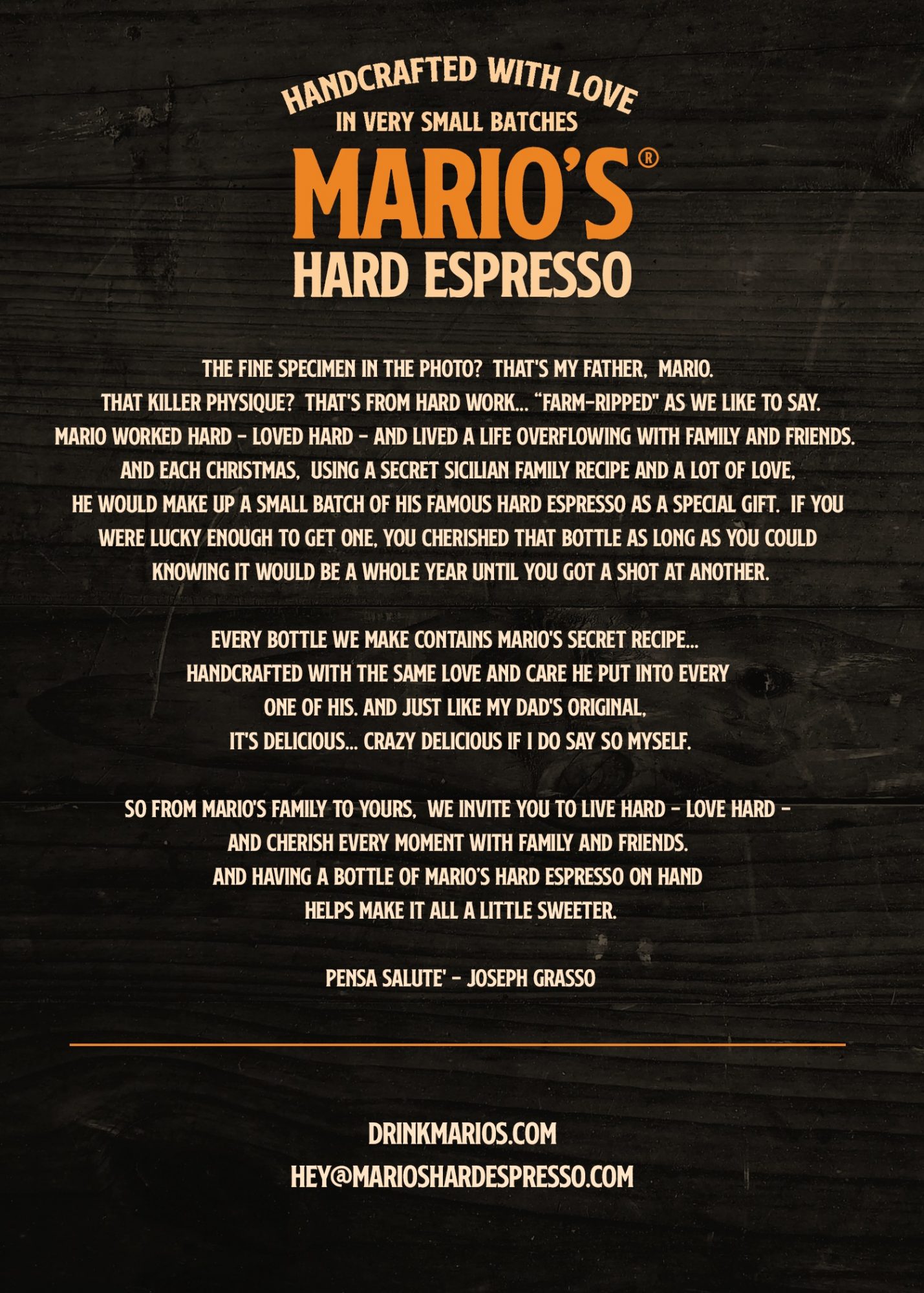 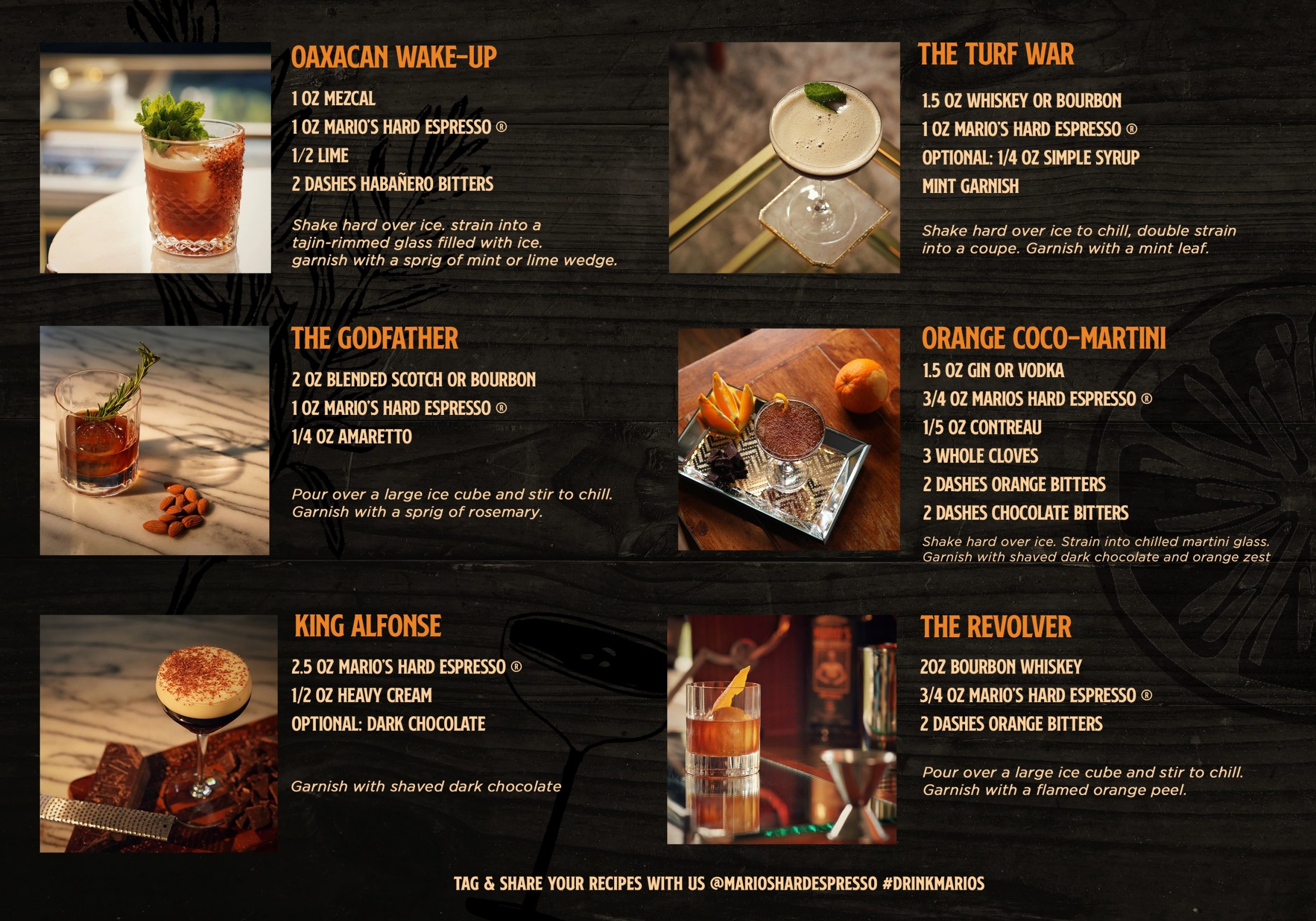