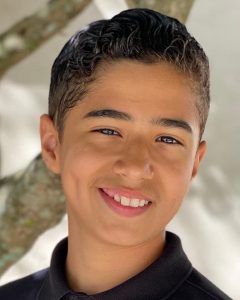 Today we’d like to introduce you to Giovanni Cristoff.

Hi Giovanni, we’re thrilled to have a chance to learn your story today. So, before we get into specifics, maybe you can briefly walk us through how you got to where you are today?
I am a 14 year old professional actor. I recently filmed my first feature film in Kansas City, called “Finding Love in San Antonio” with Director Sandra L. Martin, and distributor American Cinema Inspires, whom are based out of Los Angeles.

I accidentally started my acting career at age three. My mother was filming her music video at a film school. She did not have a babysitter and brought me into her meeting with the Director. He immediately wrote a storyline around me.

At another music video shoot, my mom was crying on set. I was three years old and thought it was real. I ran on set to comfort her, and the Director kept filming. I ended up in that music video as well.

I love to dance and have been recruited at dance parties to appear in many Latino music videos. Finally, by the age of eight, I signed with an agent in Miami, that got me my first modeling job. Many agents and directors all encouraged my parents to relocate to Los Angeles. This year, I became bi-coastal signing with Momentum Talent and Literary Agency, Robertson/Taylor Agency and SK Management. I live between LA and in Miami.

I am also a rapper. I am in process of getting my music on all major platforms and go by the name of Gio-Cutz. I will also film a music video soon. I am also a film director, editor, and director. I do my own short movies with my friends in between auditions.

Can you talk to us a bit about the challenges and lessons you’ve learned along the way. Looking back would you say it’s been easy or smooth in retrospect?
It has been a bumpy road because there was a lot of work in Miami at one point, but Florida has not made it attractive for films to be shot in Florida. Last year, Florida lost 72 movies and over 1.2 Billion in revenue because of their tax incentives for the Film/TV industry. A lot of shows left.

I did lose a lot of opportunities to be in Spanish Soap Operas and commercials since I refused to learn Spanish. ( I am a 2nd generation Colombian-American) I am focusing on learning now and audition for roles that require little Spanish. I have learned my lesson and I am embracing my culture.

I taught myself how to edit films so that I could create my own opportunities on YouTube with films and stories that I write. It kept my creativity flowing when auditions started slowing down in Florida.

The pandemic opened doors for me where I could now self-tape and do a Zoom Call back wherever I am. The movie I recently filmed called “Finding Love in San Antonio” is an example of how the pandemic changed everything. American Cinema Inspires could not film in LA due to the shutdown, so they went to Kansas City and flew in Latino actors from Los Angeles, Texas, and Miami.

Thanks for sharing that. So, maybe next you can tell us a bit more about your work?
I am a 14 years old rapper, songwriter, dancer, cameraman, director, screenwriter, film editor, and a professional actor. I am mostly known in the Latino music video circuit. I have appeared in the music video of YouTube Influencer Camila Guiribitey in her song, “Move Your Hips-EL Mundo de Camila Ft. Melany Kap (2018). I also appeared in Luis Alberto Fernandez’s video, “No Bajare la Cabeza”. He became a celebrity in a Voice contest on a Latino Broadcast. I play a younger version of him.

I am most proud of my role as Brandon in the film “Finding Love in San Antonio”. I play the love interest of teen actress Isabella Rivera-Gandulla. Our movie will premiere in 2022, on television on either The Hallmark Channel or on Lifetime.

Is there something surprising that you feel even people who know you might not know about?
A lot of my friends don’t know that I am a professional actor. They think my movies and skits on my Youtube channel is just a hobby. When I flew to Kansas City to shoot a film this past May. I told my friends that my parents were taking me on a graduation trip. My friends will find out in this interview or when the movie comes out.

I have kept my acting career as a secret because I want my friends to like me for me and not because I am a celebrity in the making. I also want to be normal as much as I can by playing sports with them and video games.

On a different note, I want to thank everyone at Voyage for giving me this opportunity for my first interview. 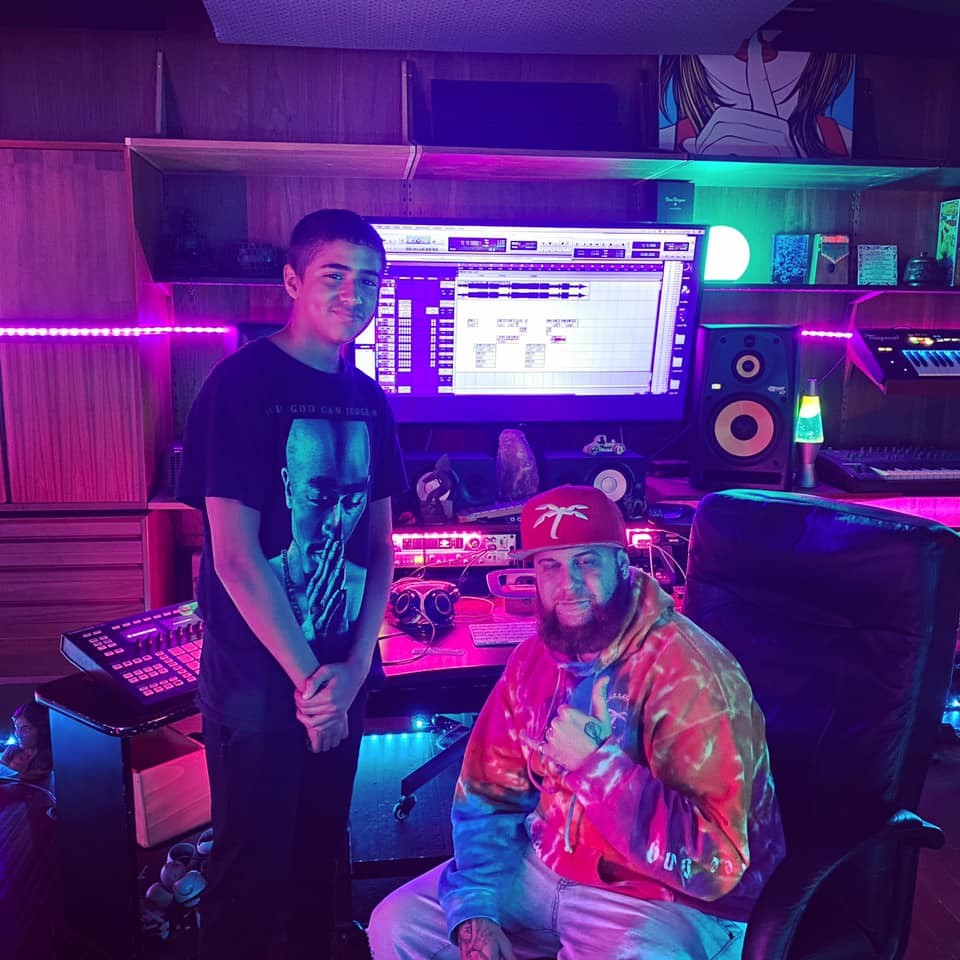 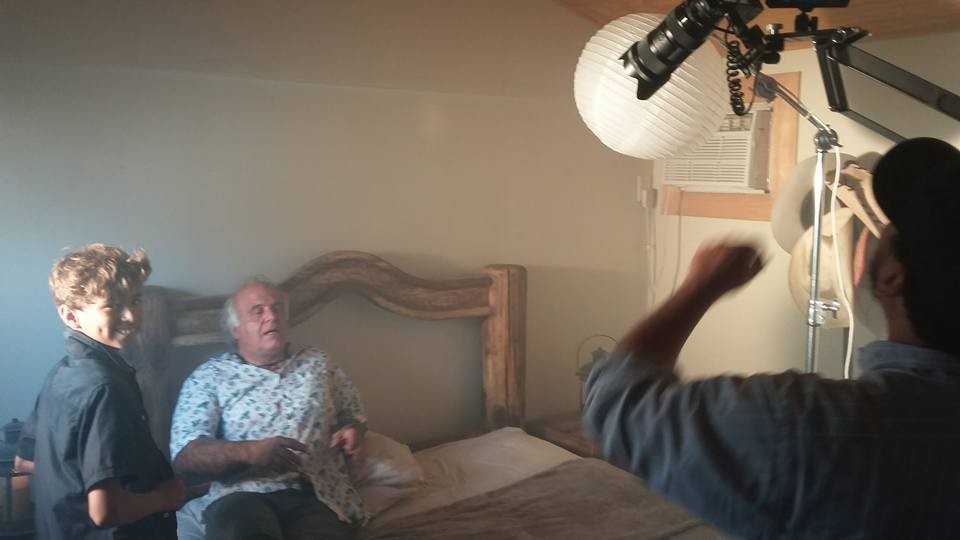 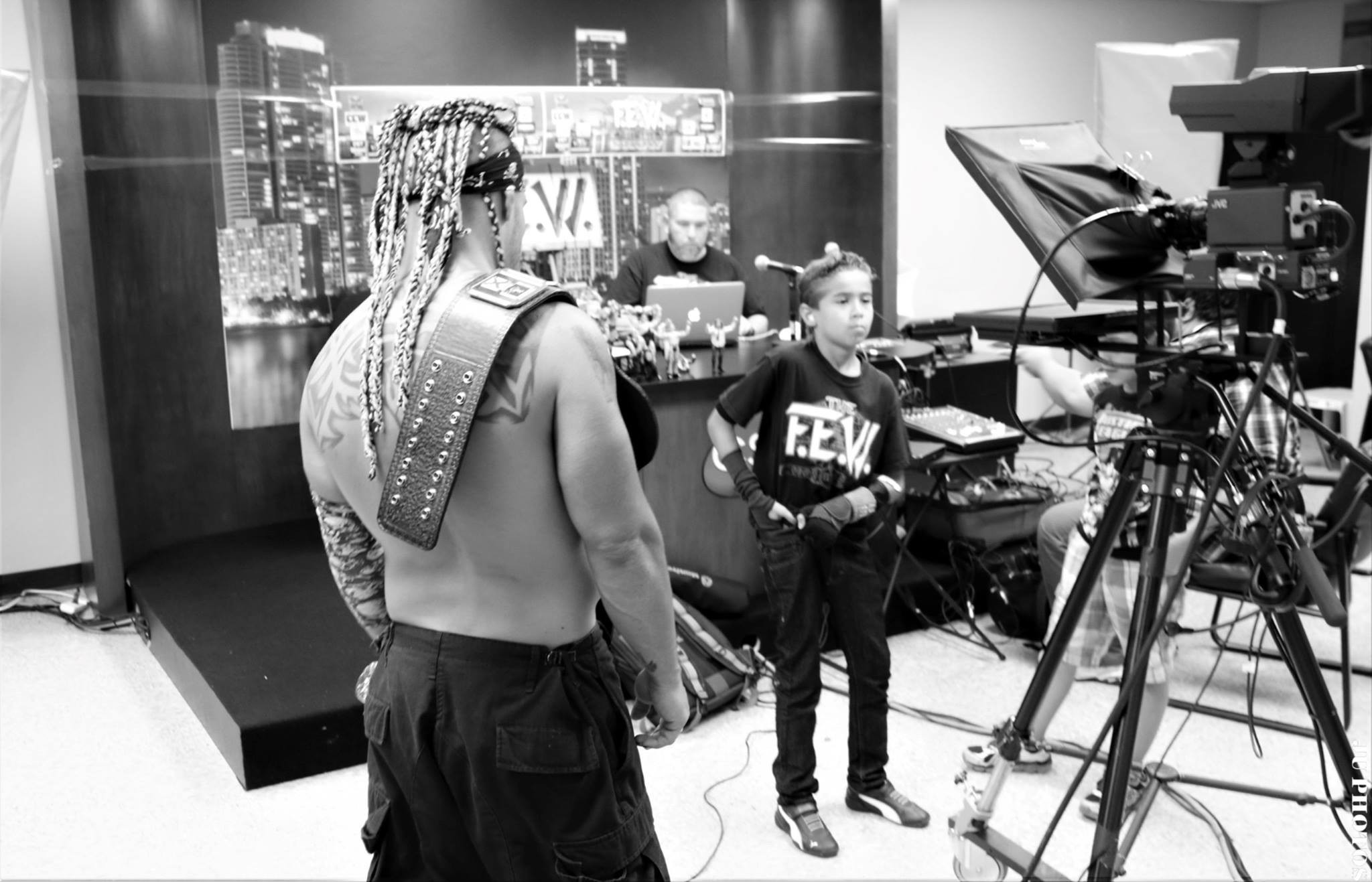 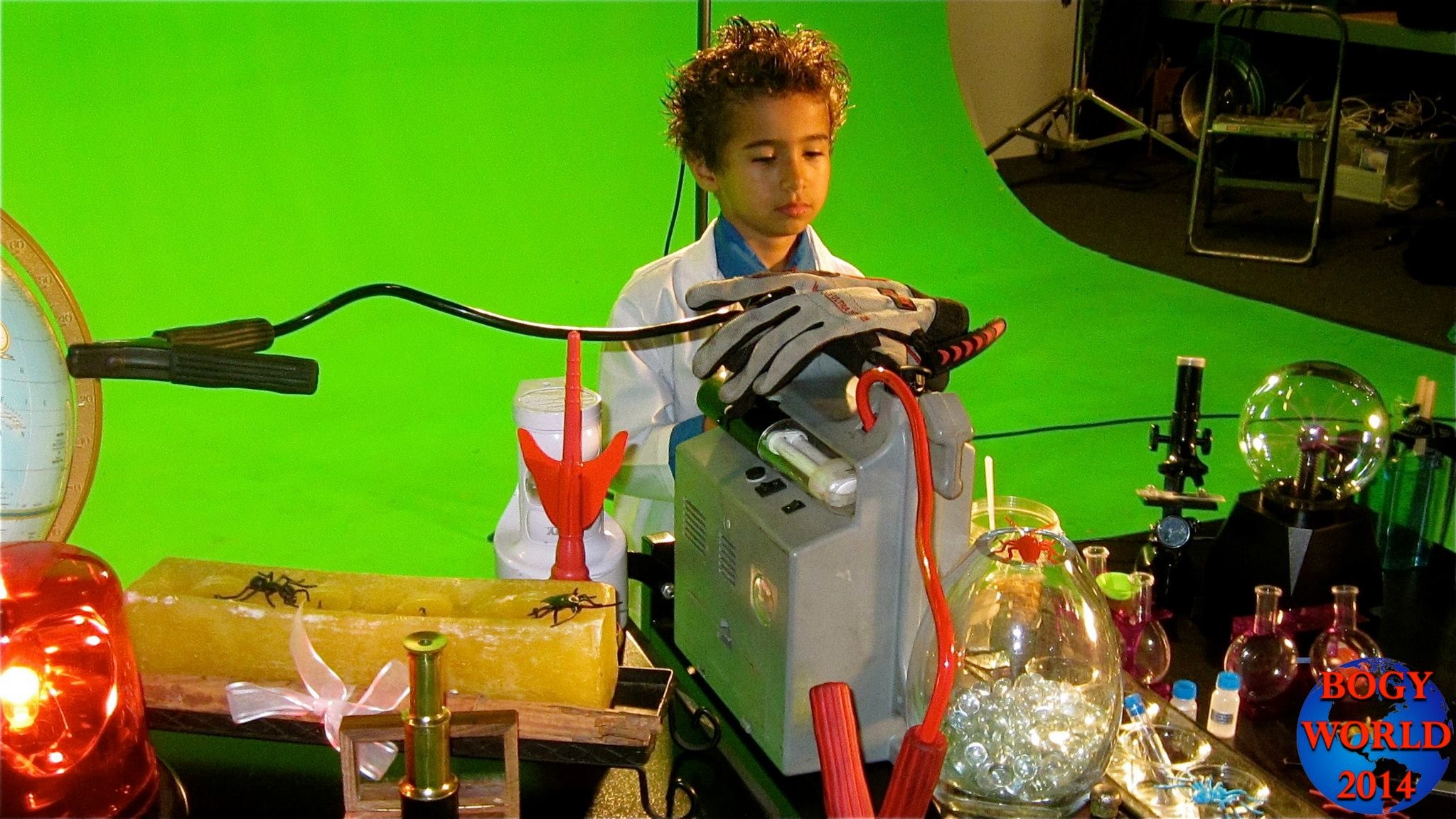 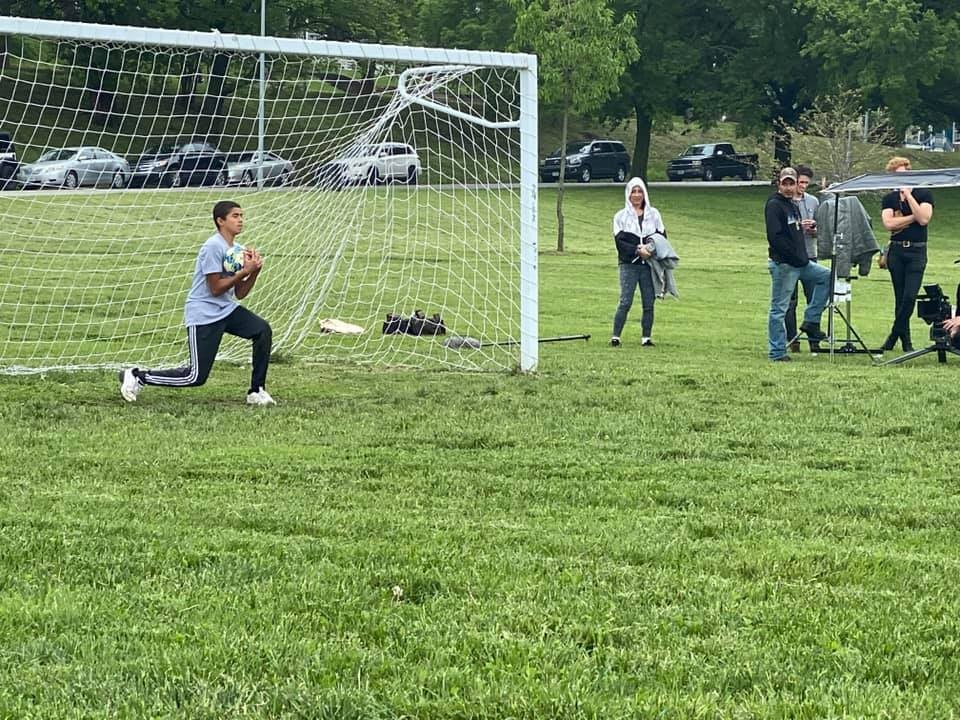 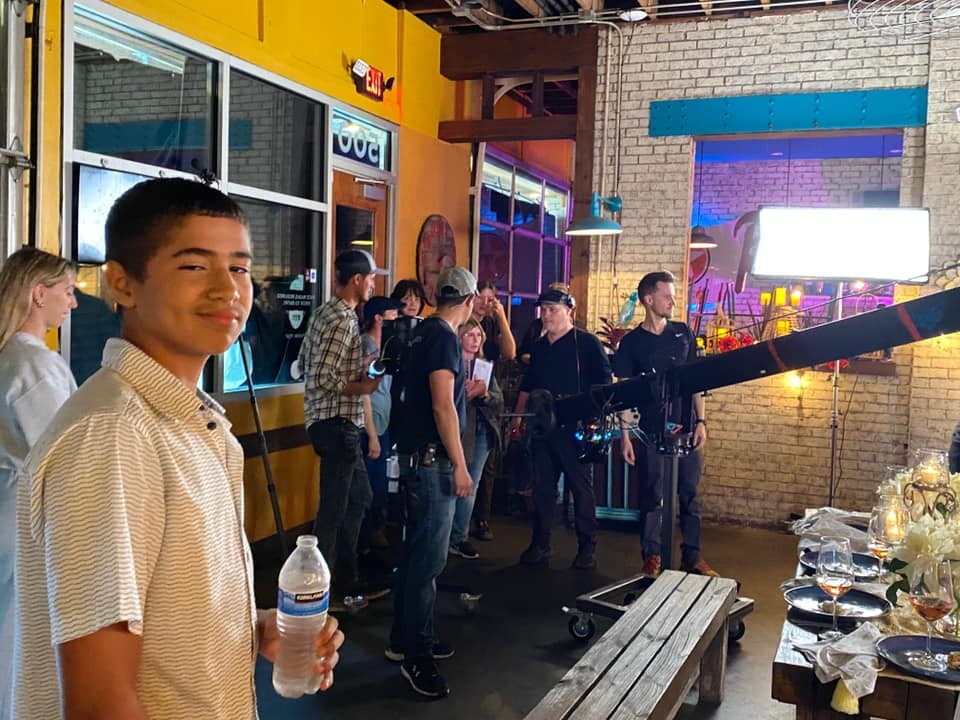 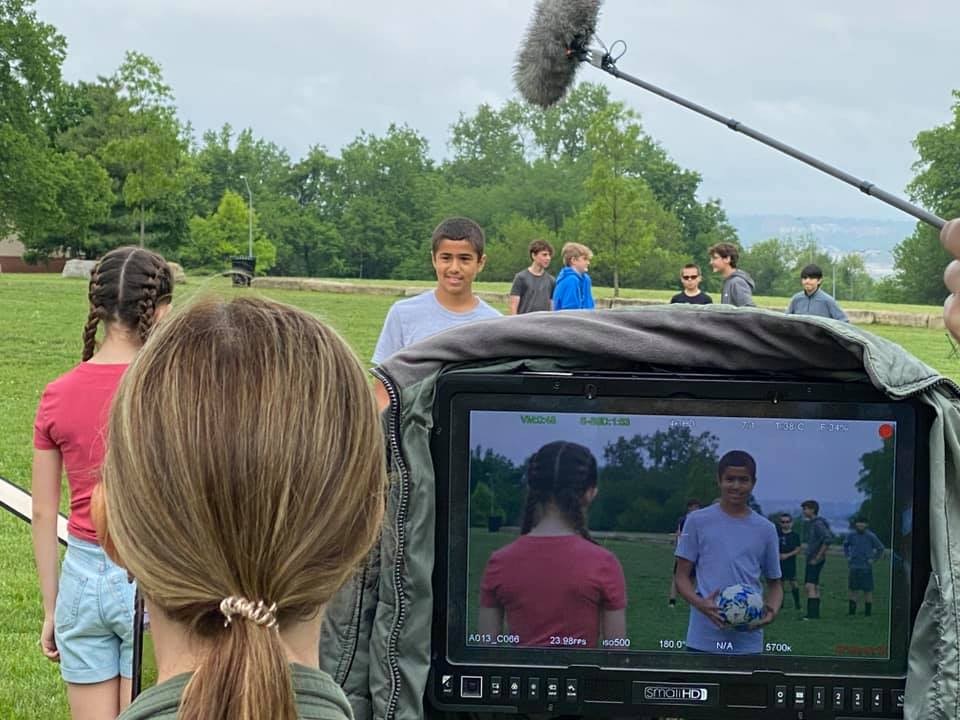 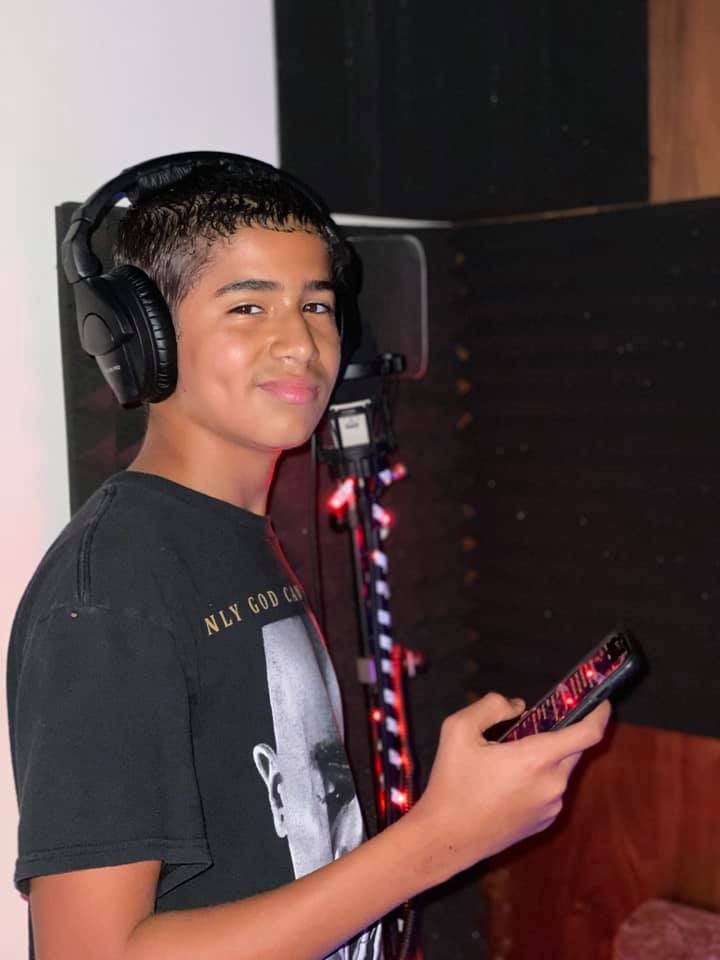 Image Credits:
Javier Ubieta took the black white picture of Gio with the wrestler. Humphrey Montoya took the green shot picture The rest were taken by Soi Fabulous aka my Mother.