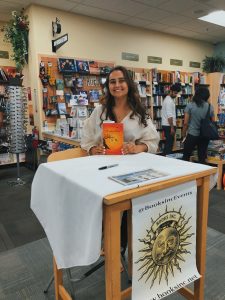 Today we’d like to introduce you to Chandra Ingram.

Hi Chandra, it’s an honor to have you on the platform. Thanks for taking the time to share your story with us – to start maybe you can share some of your backstory with our readers?
Born and raised in the Silicon Valley, California, I grew up surrounded by affluence, security, and education; however, for a portion of my life, I also lived in Bangalore, India. Those three and a half years changed my life and myself more than I knew, as I learned first-hand about the injustice and extreme poverty in many parts of the world and found a passion for ending modern day slave labor.

I distinctly remember the time I locked eyes with an Indian girl, the same age as me, and the feeling of indignation that burned within me because she deserved a better lie. It was my first time in India, and as a fairly ignorant eight years old, I didn’t understand at first why the girl before me wasn’t in school; it was the first time I realized that not every child had the life that I had. Although exposed to incalculable poverty and other issues while also traveling to other impoverished countries such as Vietnam, Cambodia, Thailand, Nepal, Egypt, South Africa, Indonesia, and Malaysia, it wasn’t until the 6th grade when a guest speaker came to my international school, that I became extremely interested in child slavery. His shared stories would soon inspire me to write my book.

A year later, I moved back to California and the impact of my time in India suddenly hit me, as I realized the immense ignorance around the subject of modern day slave labor and how few people know it still exists and to the extreme that it does. In hopes of spreading awareness of the issue, my three-page short story soon turned into a two novels about child slavery, revealing the concealed corruption and prevalent issue in India. Although I had much knowledge on the subject, I wanted to further my research more; therefore, in the summer of 2013 I went back to India and conducted over 65 interviews with current and former slaves to hear their stories. I absconded into silk factories, agriculture farms, granite quarries and was chased out of a silk factory by furious slave masters. I lived with the Dalit and Muslim communities and heard their heartbreaking stories about the unfathomable discrimination that oppresses them. My trip allowed me to discover the many root causes of slavery such as lack of education, poverty, corruption, and caste, and I was able to share my experience and story with my school Junior Year, which can be viewed on Youtube at https://www.youtube.com/watch?v=E3RwRDZHriQ.

In the summer of 2015, I returned to India again to work on one of the solutions: education, by writing an Individual Rights curriculum for 16-20 years old from impoverished rural and urban communities for the DRIK School in Chickballapur, Karnataka.

My passion for ending modern day slave labor in India will only continue on and has already driven me to create change and inspire. My book series will instill the same indignation in others that burns within me. I published my first novel when I was a freshman at the University of Southern California and later published the sequel in 2020. I had many opportunities to continue spreading awareness through book events at bookstores in Los Angeles and the Bay Area. I was never able to do a proper book launch for Freedom Lost, as I published it amid the covid pandemic; however, I hope to continue promoting my book series and stories I’ve learned through my research wherever I go.

We all face challenges, but looking back would you describe it as a relatively smooth road?
“Chandra, Run!”

The brick factory spun in circles as dust plunged into the humid air, and I choked on its debris. Drenched in relentless sweat, I sprinted for my life across unstable cobblestones molded by the slaves I had met, escaping mere moments before the slave owners’ backup arrived. His chilling threats echoed in the near distance as I jumped into my temporary refuge: the swerving van coming to my rescue.

Instead of paralyzing fear, I felt a curious and growing excitement. I clenched my iPad, filled with the 65 intimate interviews of current and former slaves, and felt a keen sense of empowerment and purpose. These slave masters could chase and threaten me, but they couldn’t kill my determination.

Despite the dangers, I continued my investigative research to discover the root causes of modern slavery. After penetrating India’s agricultural fields, brick factories and remote quarries, I next cleverly deceived my way into a silk factory to meet a reclusive young girl.

Gayatri worked seven days a week for 15 hours a day in a silk factory and is constantly beaten and abused by the owners. She stood there, gazing back at me with mutual curiosity. Her obscure burka shrouded half of her face, but it was no barrier to her radiating beauty. Our different tongues prevented direct communication, but her spoken eyes portrayed her trepidation and slanted hope. Slowly removing her abaya, Gayatri revealed her scars borne from the beatings severe to the point of causing significant memory loss. Enslaved in inhumane working conditions since she was nine years old, selling her labor to repay an interminable debt, today she was fifteen, the same age as me, yet living a polar opposite life.

Returning home to California, I felt suddenly powerless against the colossal injustice—the disparity between my life and Gayatri’s. How could I, a fifteen-year-old girl, help end slavery?

As such a young girl, writing about such a contentious issue, I needed to establish my story’s credibility. I had to take risks. My story was based on the day to day realities of millions of children. I had one chance to share their story and I wanted to do them justice. So I begged my mom to take me back to India that summer. After heckling a number of organizations, of which the majority refused to work with a fifteen-year-old girl, finally one agreed to help us.

I began writing my novels when I was twelve years old. I encountered many challenges being so young. It seemed everyone doubted my ability to tell the truth or to write a compelling story. But even more than that, it was hard to find organizations to help me. With such a dangerous issue, I was deemed a liability. After months of outreach, finally an organization named Jeevika offered to help me. It was a really important lesson for me that I would carry with me throughout my career as a journalist. You can reach out to hundreds of sources and only get a handful or even one to agree to talk to you. But if you’re persistent enough, you’ll get that one yes and all the no’s won’t matter anymore.

Despite the improbability of me making even a dent in this immense iniquity, I seized the power of my own voice. As long as I had the ability to share their stories and spread awareness of their revolting reality, I would. I returned home with a new ambition, more tenacious than ever, to fight for freedom.

My emotions spilled over into the lines of my two novels, Freedom Child and Freedom Lost, as I incorporated their true stories into the lives of my fictional characters. It was their bravery that inspired me to write for the thirty million slaves around the world.

Born and raised in the Silicon Valley, California, I grew up surrounded by affluence, security, and education; however, for a portion of my life, I also lived in Bangalore, India. Those three and a half years changed my life and myself more than I knew, as I learned firsthand about the injustice and extreme poverty in many parts of the world and found a passion for ending modern day slave labor. Throughout my writing career, I’ve learned to get my hands dirty. The risks I took to uncover the truth allowed me to give justice to the stories I shared.

Great books disrupt our ability to remain ignorantly comfortable, reminding us that society is flawed and sparking passion to ensure social justice will prevail. Powerful stories with inspirational and horrific characters have the power to touch our hearts and turn our minds. This was my goal— to give a voice to the voiceless—for the millions suppressed by invisible chains.

As you know, we’re big fans of you and your work. For our readers who might not be as familiar what can you tell them about what you do?
When I first began writing my book series, Azadi, when I was twelve years old, I didn’t identify as an author or investigative journalist. But over the past ten years, these two identities have become core to who I am. At the University of Southern California, I received two degrees in journalism and international relations and the global economy. As a journalist, I continued my passion for writing and sharing important and often controversial stories. I am proud of myself for continuing to be an advocate for others and using my voice to help spread awareness about social justice both locally and internationally. I am currently writing a third novel about the horrors of the foster care system in Los Angeles, based on the story of a young women I met at USC. The systems failed her, and because of it, she experienced trafficking, rape and torture, homelessness, juvenile hall, and more. As a writer, I believe it is my duty to share these heartbreaking yet real stories to the world so they can inspire change.

How do you define success?
Success is relative. Success is the ability to achieve your own personal goals. I wrote Freedom Child and Freedom Lost to spread awareness about the horrors of child slavery and sex trafficking. Would I consider myself successful in this goal?

The truth is there are about 40 million people in slavery today. About half of that population is in India alone. About 9 million of that population are children. But besides the lack of knowledge on the subject in my own community, I had struggled with another conflict that was internal. I had seen so many people that needed my help and I felt so small and useless as an eight to eleven years old. Even if I had given my spare change to every person that tapped on my car window in the streets, I wouldn’t have made a true change. It would be like a drop in the ocean, almost invisible. I felt that I was one person couldn’t make a difference; the problems were way too huge and out of my league.

It actually wasn’t until my 7th grade when I had already moved back to California that I realized my power as one individual. I realized I couldn’t save every single person from slavery, but I could give them a voice. The voice that is stripped from them when they are deprived of their freedom. They have no way to tell their stories and share their pain and cries for help to the rest of the world. But I soon realized that I could share their stories for them.

I remind myself after every speech I give about this topic not to leave sad that slavery still exists but hopeful that I can help end it. All it takes is one person. All it takes is spreading awareness. All I can do is try a give a voice to those who can’t be heard. If one person read my book and looked up ways to help end modern slavery, I would say I was successful. 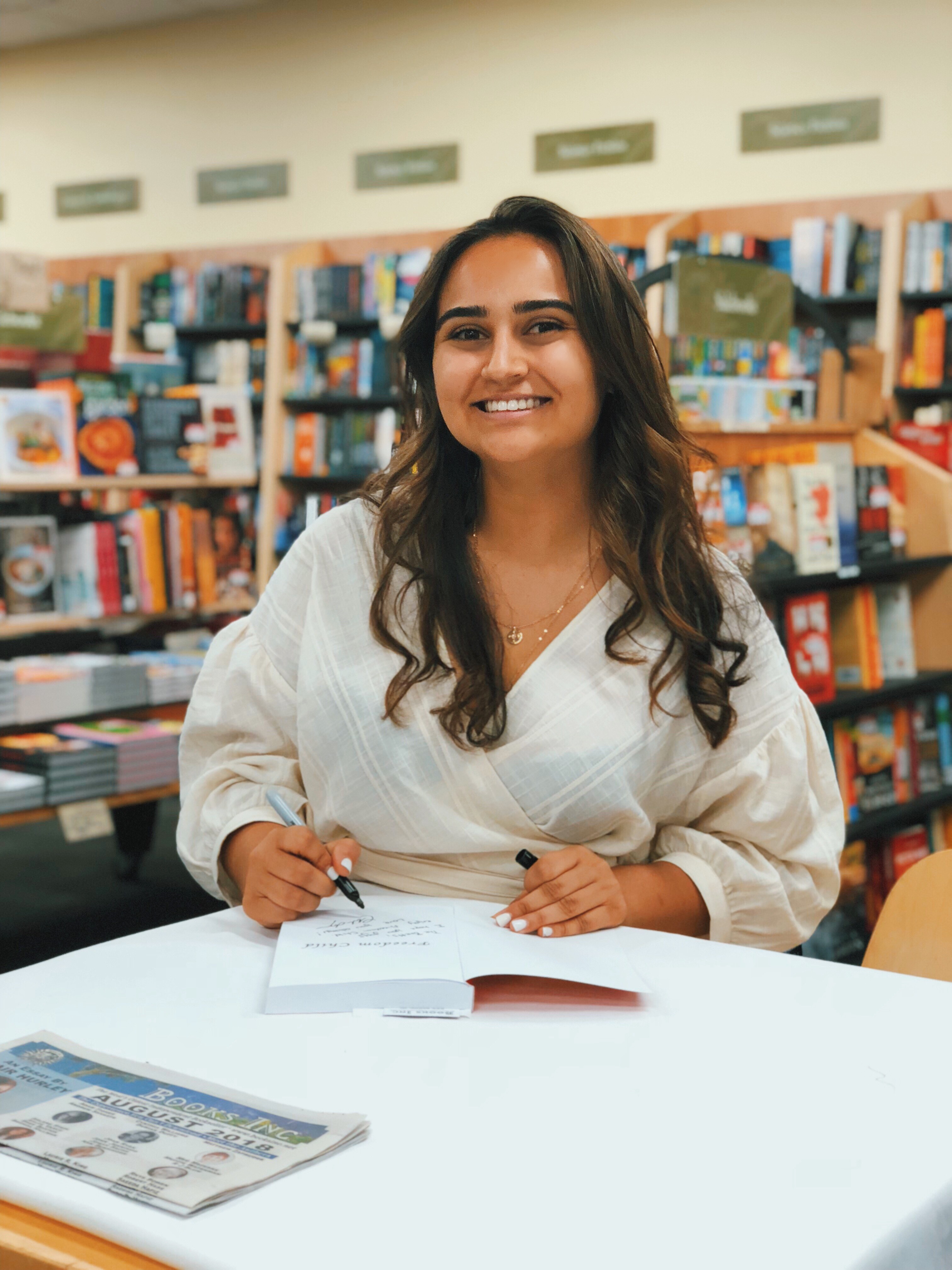 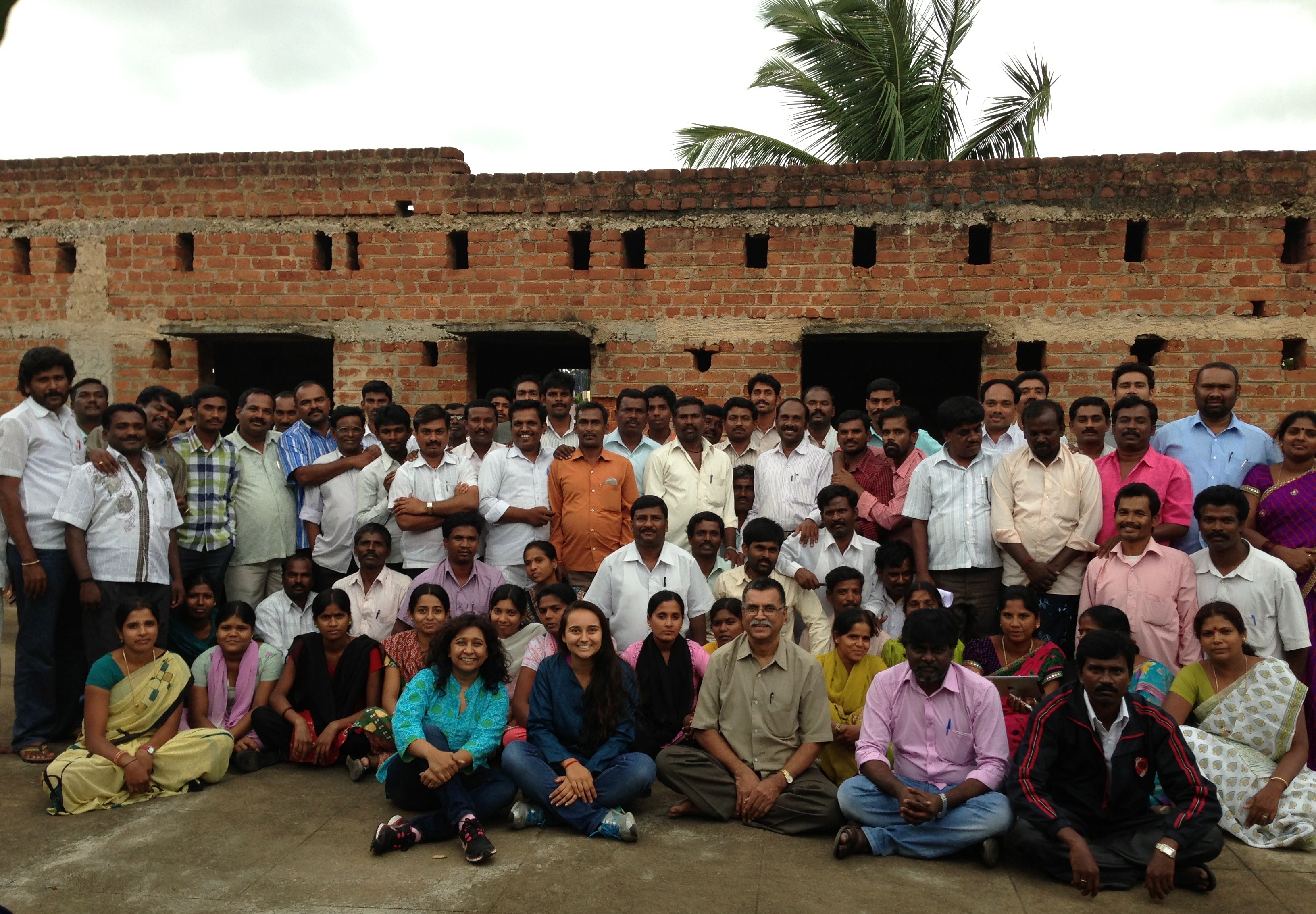 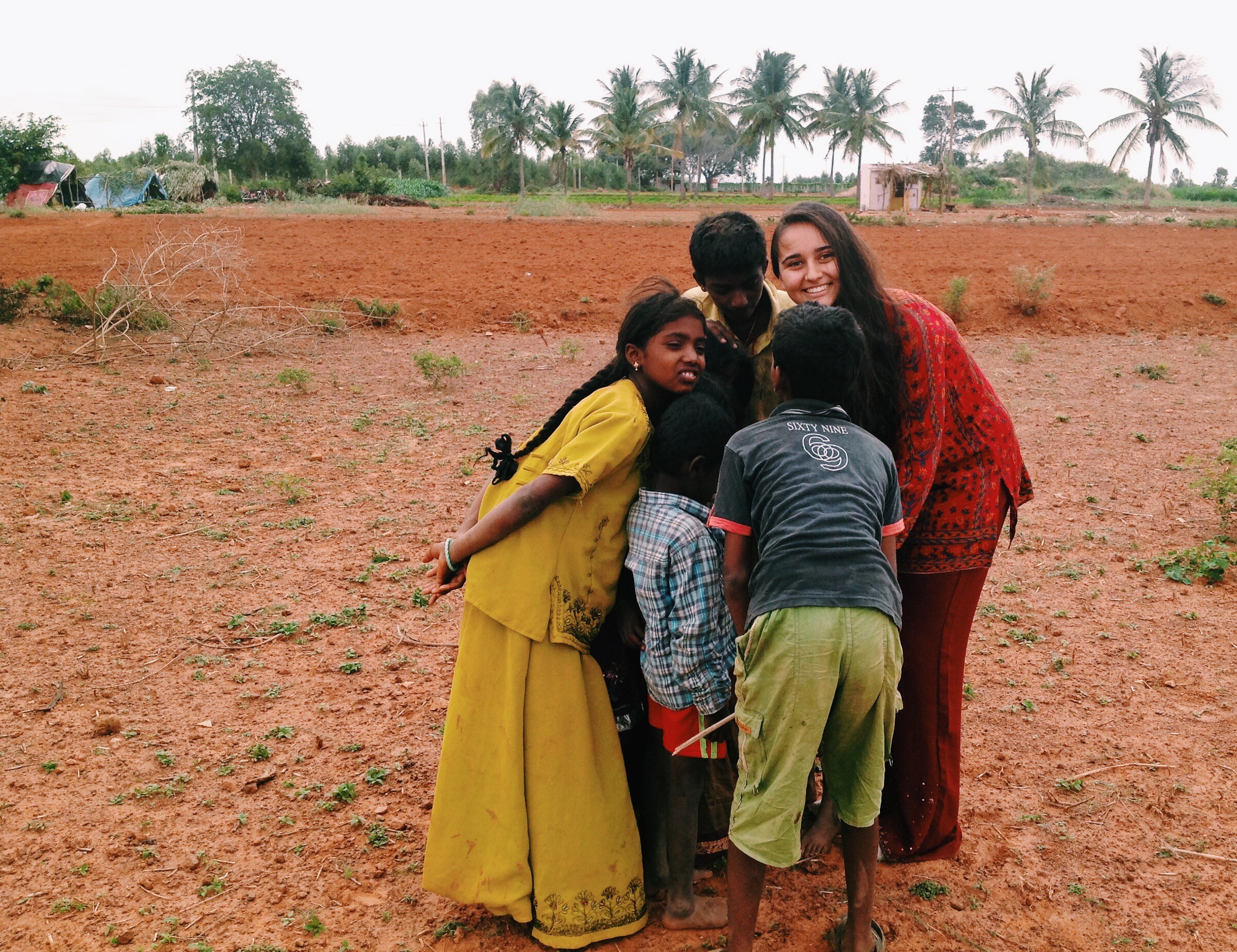 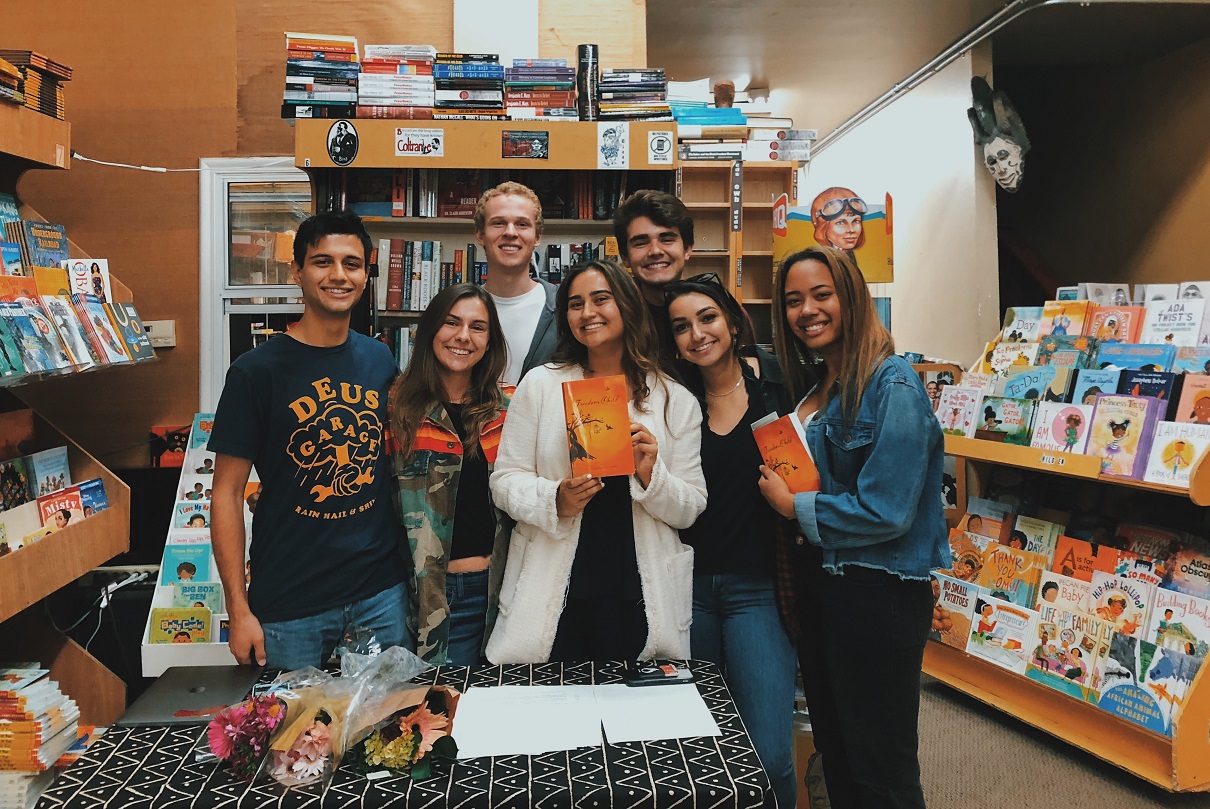 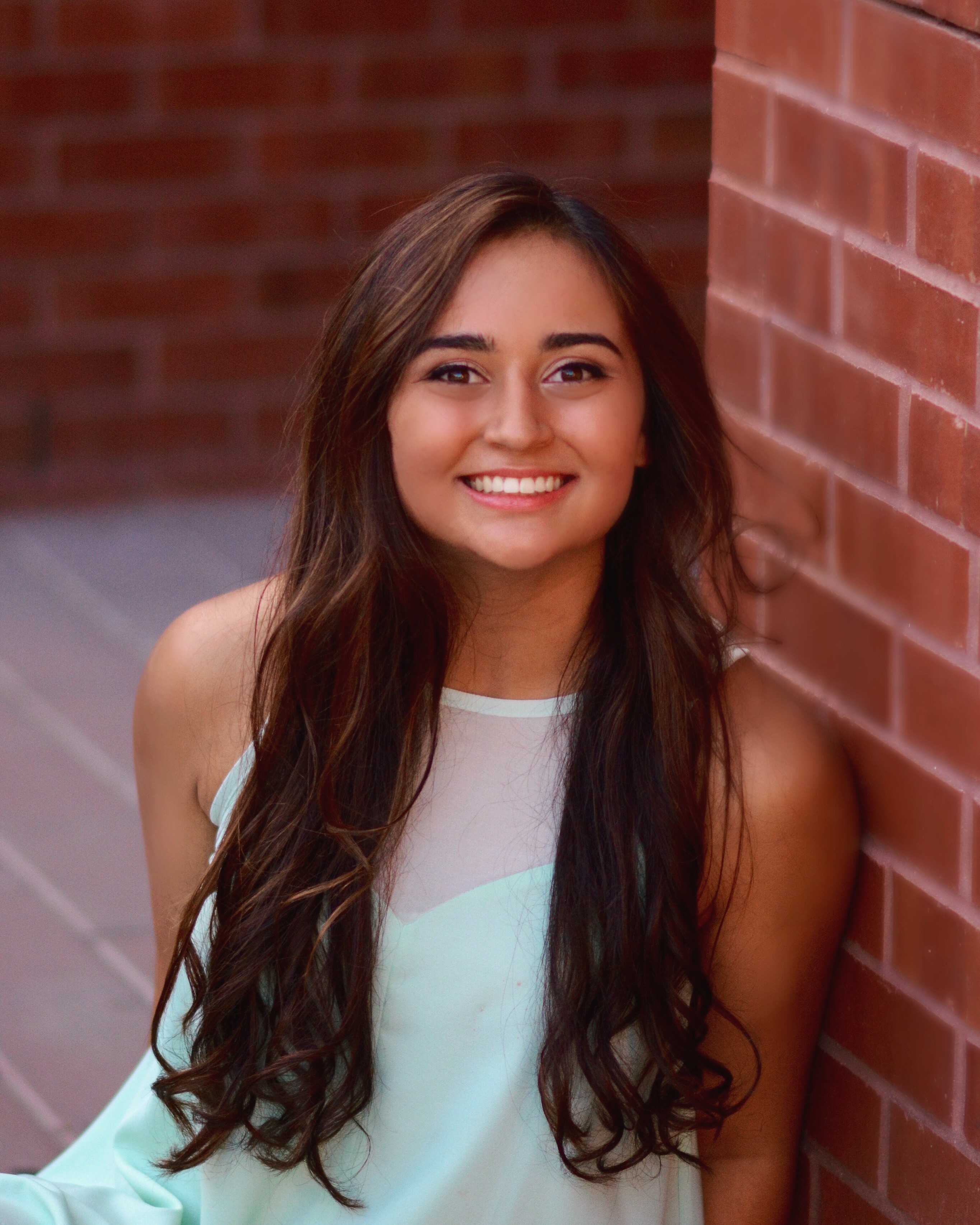