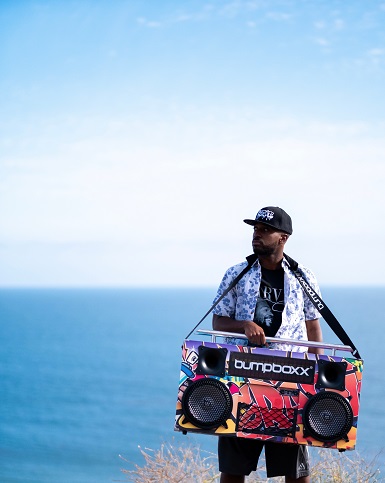 Today we’d like to introduce you to Brian Burns.

Hi Brian, can you start by introducing yourself? We’d love to learn more about how you got to where you are today?
My name is Brian Burns II. I was born and raised in the city of New Orleans, Louisiana. My childhood was amazing because my parents always made sure me and my older brother had everything we needed or wanted. My parents did a very good job keeping me sheltered from the madness that was going on in New Orleans around the mid 90’s. I was born in 1994 and New Orleans was one of the most dangerous cities to live in. Even though it was dangerous, it was still home and a beautiful time so we made it work the best way we knew how. Music has always been a part of my life since I was born. My father played the piano, drums, and he could sing as well. He put me on to a lot of the music that I love and listen to today. My early stages of music was being a singer, mostly R&B songs. Started out singing in school plays very young. Music was not my first path that I would pursue seriously though, it was basketball. My father put a basketball in my hand when I was a little one. So, I knew my life would either be music, sports, or both. Basketball became the main focus from young all the way to high school. I had the natural talent of a very good basketball player and with more development, I could have ended up making it to the NBA. I was living in New Orleans from pre-k all the way to 6th grade and was still playing basketball full time and doing some music things on the side here and there. Who would have thought that once I started 6th grade, my life would be changed forever.

In August of 2005, I had just started school, my first week of 6th grade. Not even a full week went by and my mother tells me that we are moving to Atlanta, Georgia. Hurricane Katrina was coming full force and I didn’t realize the huge impact it was about to have on my life. Imagine going to school with friends and people at your elementary school and then hearing that some of those same people drowned and passed away during the hurricane. I remember vividly me and my mother went to stay by one of her friends in Baton Rouge, Louisiana while the storm passed and remember hearing the strong winds blowing outside. My father was actually swimming in the water and got sick from all the chemicals that was mixed in the water. My grandparents were stuck at an airport somewhere and it was just so much going on. I was eleven years old when Hurricane Katrina hit and it remains one of the most devastating tragedies in my life. Me and my mother finally made it to Atlanta. We stayed with her brother for a bit until we got back on our feet. She wanted to make sure that she got me in school first so I wasn’t falling behind on anything. One of the biggest lessons that Hurricane Katrina taught me that young was to be able to adapt to any situation when life throws you curve balls. That lesson helped me later on once I became an adult and stepped into the real world. I started writing poetry right after Hurricane Katrina. It was a way for me to express myself as I had so many emotions built up and I needed to get it out. The poetry turned into rhymes and that’s is when I found my new passion. My first rap that I ever wrote was about Hurricane Katrina. I was at my new middle school in Atlanta and one day, it all just came out. I described Katrina as a woman who broke my heart and changed my life forever. It felt really good to get those emotions out.

So I would continue to write and fall in love with rhyming. Was still playing basketball full time through middle school and 8th-grade year was the year where things took a turn. I was playing in an AAU basketball tournament in North Carolina and ended up breaking my tibia bone. It wasn’t an ending career injury, but this injury really hurt my chances with a college who was scouting and interested in me playing for them. It was Clemson University and they were going to give me a full-ride scholarship to play basketball. Once high school started, I was still good but it wasn’t the same as before I broke my tibia bone. Went through a lot of physical therapy and would have been the starting point guard on the varsity high school basketball team if it wasn’t for this injury. 10th grade, I went to this new high school and it was honestly probably one of the biggest mistakes I’ve ever made. I should have stayed at the high school I was already at and kept playing there. I started falling behind on grades at this new school and was really getting into a lot of trouble. I don’t know why but I honestly just stopped caring. Got into some really big trouble my 10th grade year and my mother figured that I should go live with my father back in Louisiana for the rest of high school. So for the rest of my sophomore year all the way to graduation, I lived with my father in Baton Rouge, Louisiana. It was good for me to be with my dad at that point in my life because I really needed his guidance or I would have ended up going down a path that would have lead to prison or death. Baton Rouge was different from New Orleans. I had a serious wake up call once I got to my father’s spot. The area he lived in was drug-invested and the crime was unbelievably bad.

My main mission was to graduate and get myself out of there. Still played basketball for a bit until my junior year. Honestly, basketball got to a point where it just wasn’t fun anymore. So I gave up on that dream and started to pursue music full time. Junior year is where I had another tragedy that changed me forever. One of my best friends Brian Parks passed away from brain cancer. I remember getting the news while I was sitting in my biology class. I broke down and just couldn’t speak or do anything. His death hit me really hard because we were supposed to be doing this music together. That death also really gave me the strength to go even harder and make something happen. I remember writing a song about him and I did it at my high school talent show that same year. I ended up winning and had everybody in the school crying because they couldn’t believe it. I was a very quiet kid who didn’t speak much, but when I did music I had so much to say. Was doing a bunch of music stuff while down there from shows, music videos, recording, etc. Before I knew it, it was time to graduate and I did it. After graduation, I ended up moving to Las Vegas, Nevada and lived with my older brother Lance. Vegas was cool and fun but it’s really not a place to live in my opinion. Very easy to get into stuff there and it’s very easy to get caught up in all the lights, cameras, and action. So I lived in Vegas from 2012 to 2016. After Vegas, I ended up moving to LA. I felt that LA would be better opportunities for my music. It was one of best decisions I made. Being in LA, I made so many connections with music. I really found my zone here and I’ve been making a way for myself ever since.

Alright, so let’s dig a little deeper into the story – has it been an easy path overall and if not, what were the challenges you’ve had to overcome?
I would say one of the main struggles was making sure I had consistent income. It wasn’t always easy but I figured things out along the way and that’s life. When we step out into the real world life still happens while we are pursuing our passions. So we have to make sure that we are still taking care of ourselves while on the journey. The ups and downs are all part of it and I love it because it made me who I am.

Alright, so let’s switch gears a bit and talk business. What should we know about your work?
I am an emcee. My artist’s name is Brian Bars Burns. I earned that name once I moved out to LA and I would have my boom box speaker and always be freestyling in a bunch of cyphers with other artists in my world. Music is my calling and passion. The way we can impact people’s lives through words has always been something that’s amazing to me. I’m known for being a lyrical emcee who puts rhymes together in a unique way. I’m most proud of how far I’ve come and never given up on it after everything I’ve been through. It’s been a long journey and I’m so proud of myself for sticking with it and staying true through it all. I think what sets me apart from others is my ultimate confidence that I have in myself. Nobody can take this away from me, I will be remembered as one of the greats who did this.

Who else deserves credit in your story?
I would have to say my father because he is the one who put me on to music at a very young age. If it wasn’t for him, I wouldn’t know half of the stuff I know about music. He always told me if you’re going to do something don’t half-ass it. That always stuck with me. So I would say my father and my best friend Brian who passed away from cancer because as I stated in my story, we were supposed to be doing this music thing together. Before he passed the last thing, he told me was to never give up. 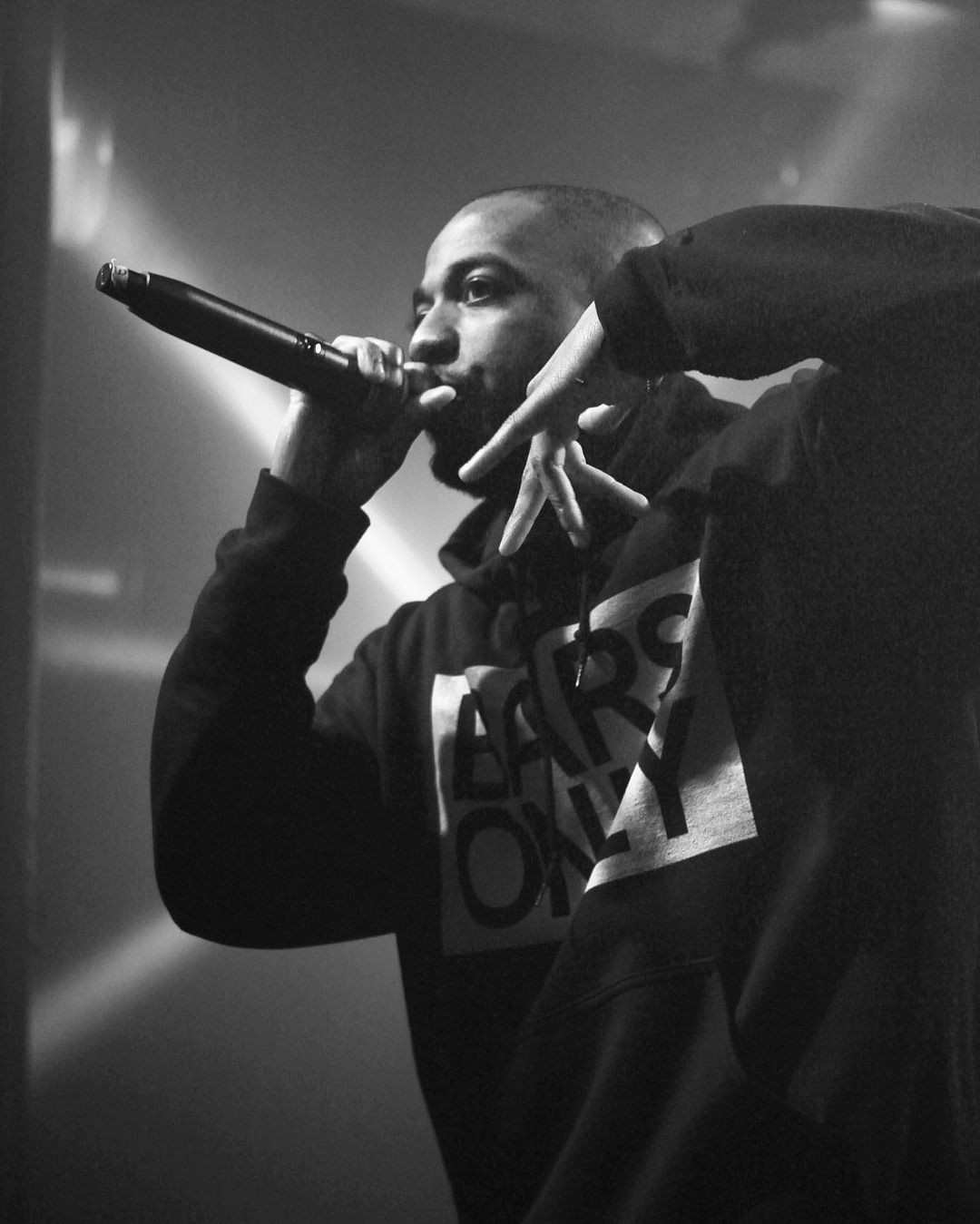 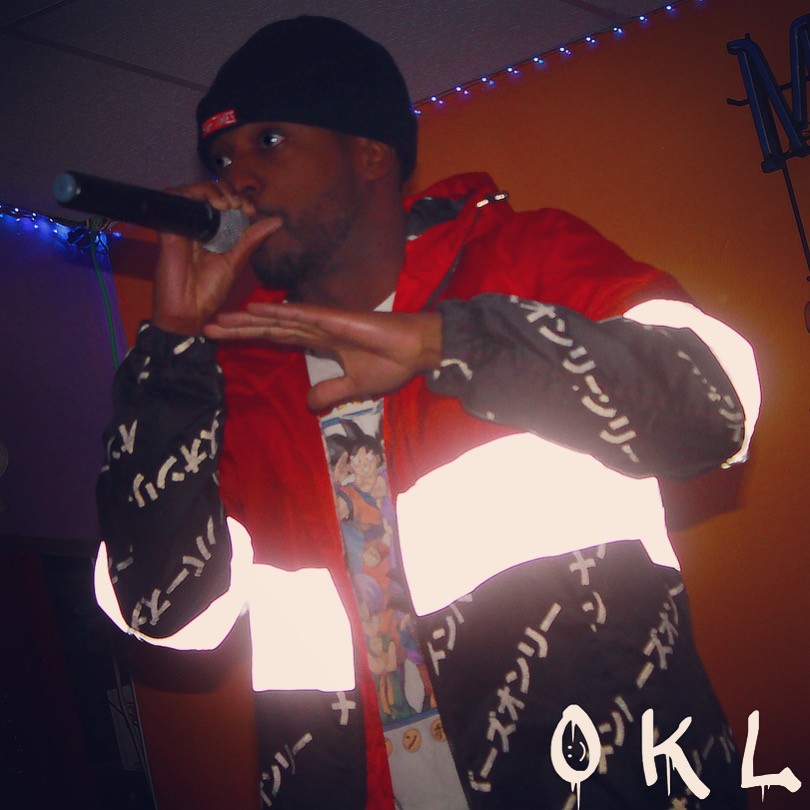 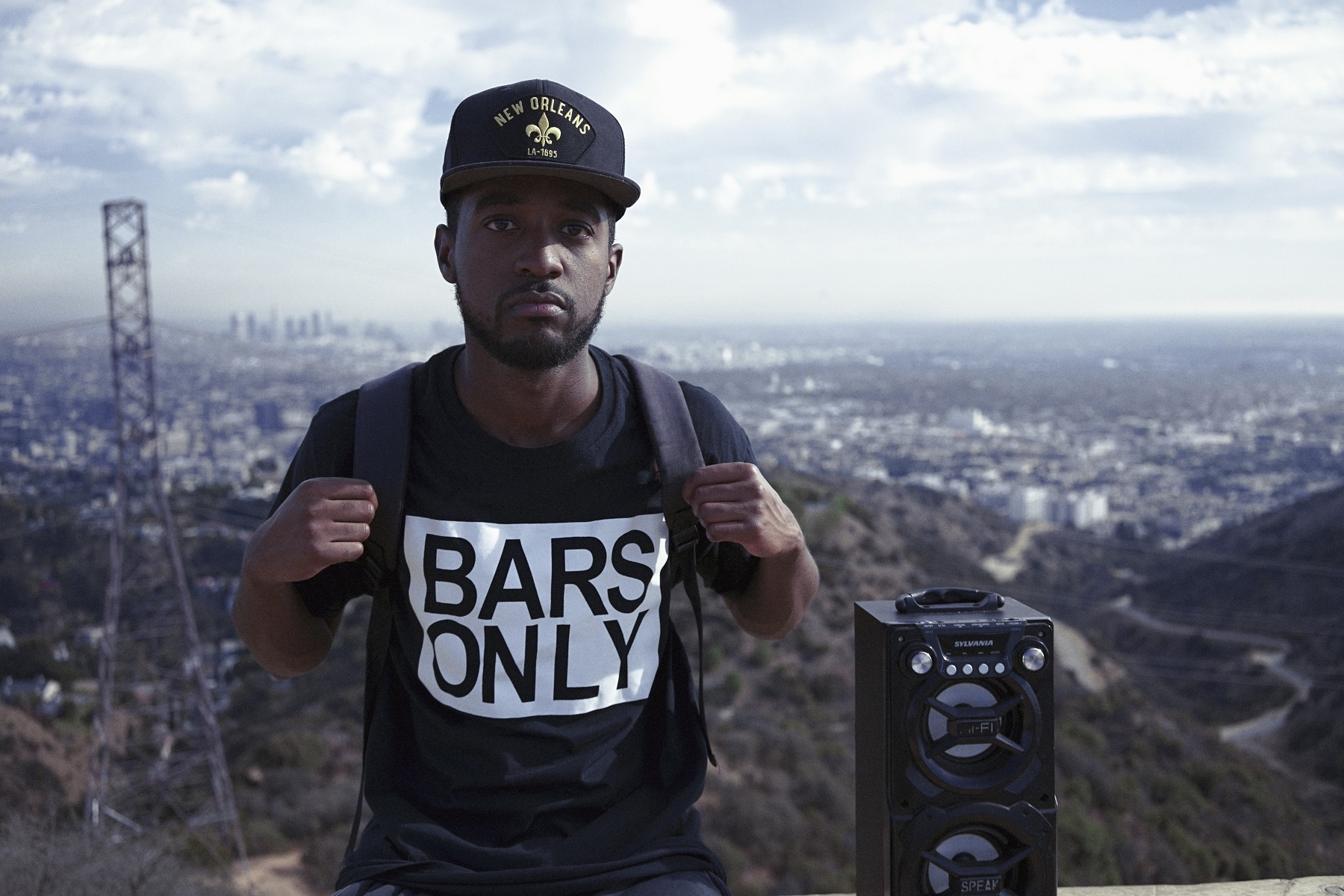 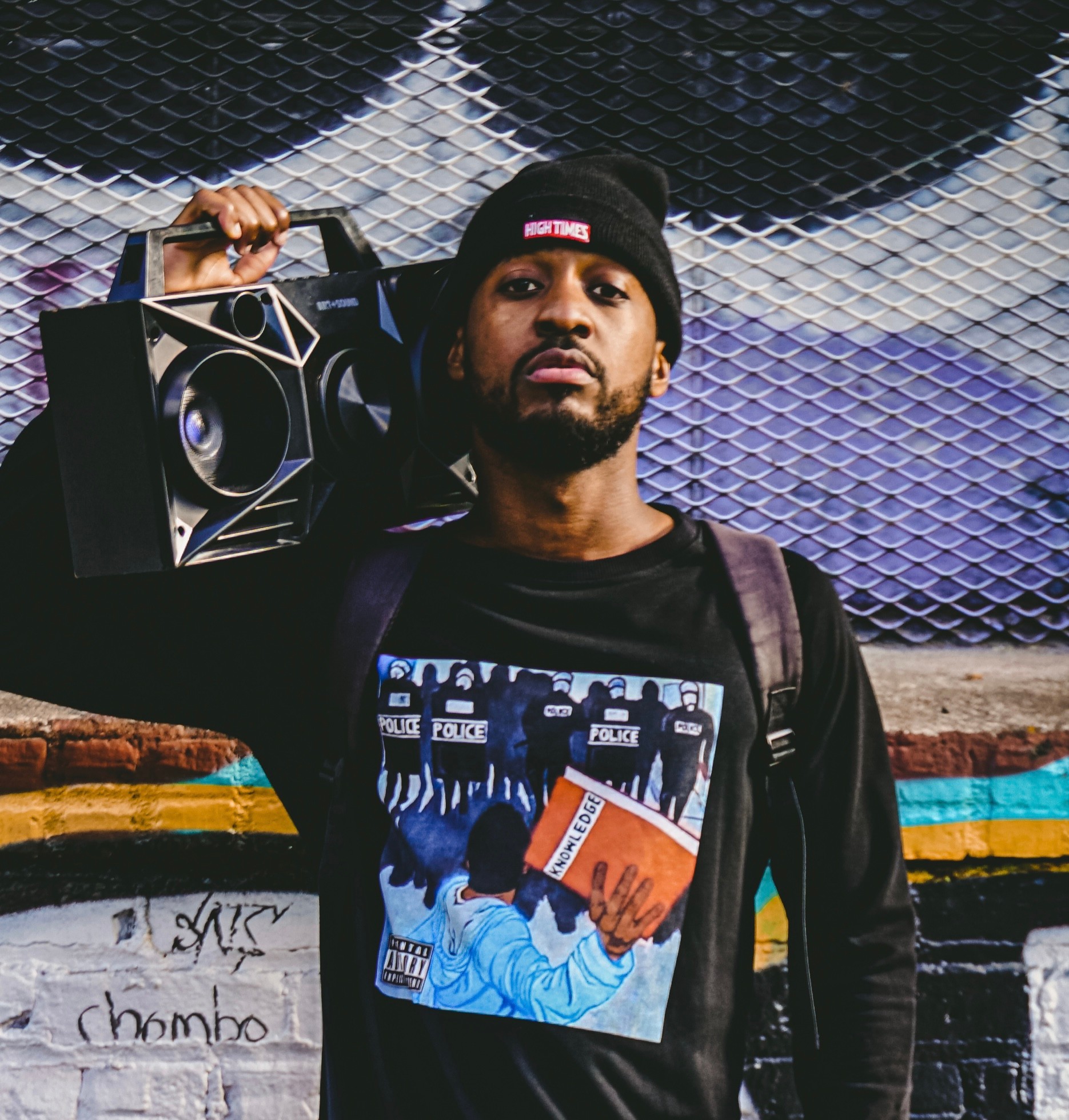