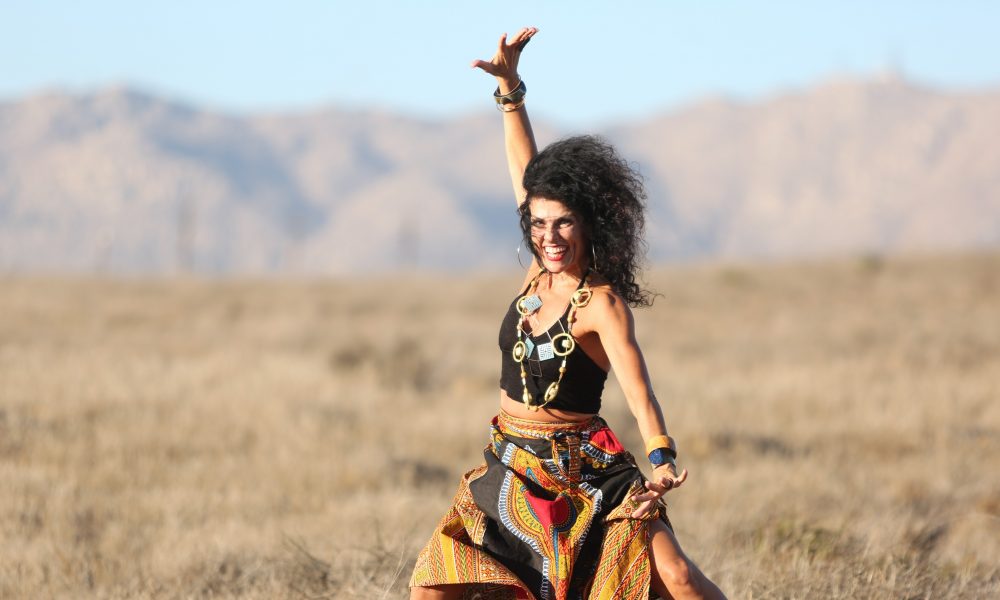 Today we’d like to introduce you to Julie Simon.

Hi Julie, thanks for joining us today. We’d love for you to start by introducing yourself.
I am a fully alive dance artist. My story is spontaneous combustion of magical, unplanned, unexpected intersecting moments. I did not have the traditional dance beginnings. I was 20. I was a Journalism/English lit major at San Francisco State. It was 1989. I had a paper due and was out of typing paper. I grabbed my keys my wallet and ran out the door trying to get to Walgreens before they closed at midnight, as I rounded the corner, I heard music coming from a tiny hole in the wall on lower Haight St. called Nickie’s BBQ. I was super intrigued. Not yet being 21, I used the power of persuasion combined with a dimpled smile and talked my way in. The next thing I knew, I was on the dance floor moving my body in ways I never had, expressing myself in ways I didn’t know possible and was for maybe the first time in my 20 years completely alive.

At the end of the night, a young saxophone player came to me, pointed finger in my face and said, “Little girl you need to take a dance class.” That was one of the most pivotal moments of my life. Every time I think of him, I’m so grateful. I did exactly that. I immediately enrolled in an Afro-Haitian / Dunham Technique class, and then another and then another. My life became consumed. I never bought another school book or paid another parking ticket. Everything I had went to classes. I could only dance, would only dance, ate drank slept only dance. I found true love. I remember thinking I’m alive alive alive. I felt beautiful, gorgeous fulfilled and complete. Life was mine. I was stretching myself in ways I didn’t know possible both literally and figuratively. I could for the first time see my posture, my glow, me. Within six months, I was dancing professionally in an Afro-Brazilian Dance Company that toured both nationally and Internationally. My life was forever changed.

In my last semester of college, I went to Paris with a friend on vacation. I took a dance class. The teacher, who later became my greatest mentor, Eneida Castro, offered me a job in her dance company right there on the spot. Instead of pouncing on that opportunity, I said no. I told myself it wasn’t possible. I panicked. I didn’t believe. I was scared. I left Paris and left the opportunity of a lifetime, not believing it could really work out. I left for the safety of a full-time job and being comfortable following the norm. I tried to tell myself the bit of dancing I could do on the side would be enough, would be a fun hobby. I spiraled. I started running the streets of San Francisco in the middle of the night for hours at a time trying to escape the thought that I passed up my one true chance at living to my fullest potential. For two full years, my period ceased, my body reacting to my anguish. How could I ever forgive myself. How could I have turned my back on my own true self, my posture my glow? The torment to anguish filled years later. I quit my job, sold everything, said goodbye to my family friends, a steady paycheck and my quaint apartment in The Castro. I left it all and moved to Paris. I had to try to make it work. I literally felt as though it were a matter of life and death. I didn’t speak the language, I didn’t have legal working papers, I didn’t even have a coat. Clearly, I didn’t think any of it through. I just knew I had to be reunited with my love, with myself. I’ll never forget the reunion.

With a fluttery heart, sweaty face and high expectations I stepped into the studio at Centre de Danse du Marais saying, “I’m back, oh how I missed you, please forgive me.” I believe I even fell to my knees. My period started the next day. I was forgiven. Imagine my shock when I was told the dance company no longer existed. This was clearly before social media, so I had no way of knowing, however there was no turning back. I gave myself six months to “make it” The six months turned into 7+ glorious years. My first successful audition took me to Africa, then to Morocco to Germany, television, movies magazines, the list goes on. I danced Monday through Friday in dinner shows in Paris and traveled all over Europe with several dance companies weekends and summers. It was amazing. I met my husband on a dance floor. We became dance partners. We fell in love. We got married. I ‘made it.’ And to think I told myself at one point it was impossible. Look at what I would have missed. In 2003, I had the baby bug. I came home thinking I was done. I learned you are never done. It’s funny at 30, I thought I was old, at 37 I thought I was old, at 41 I thought I was old, when I hit about 45 I realized I’m not old. I’m just getting started; I haven’t peaked yet.

Now at 51, 31 years after that fateful night at Nickie’s BBQ, I’m just hitting my stride. Since returning, I began teaching. I started my own dance company Tropicaleiza. I’ve self-produced several sold-out dinner shows and performed at countless festivals, galas, events. I opened a studio specializing in dances from all over the globe. I created an all-female drum ensemble. I gave a TEDx Talk on The Transformative Power of Dance, I developed a comprehensive dance training program, the JSMethod and travel and teach master classes nationally and internationally, telling stories of hope along the way. I’ve held countless hands and stared into many faces whispering and/or screaming you can do it. Everything is possible. Go. Run. Fly. Don’t let anyone clip your wings, especially you. Get out of your own way. I am the mama of two gorgeous boys 16 and 11 and am blissfully married to the gorgeous man I met on the dance floor. Dance steps are taught and learned, technique is taught and learned, choreography is taught and learned. What isn’t taught is our own unique energetic expression, our very own heartbeat. Only we can create that, it’s spectacular and it’s ALIVE. When I teach, when I train when I create, my mission is to encourage lead people to investigate that pursue that. I give the outline of the methodology and encourage them to color it in with all their magical colors, infuse it with all their delicious flavors, MAKE IT DIVINE.

I’m sure you wouldn’t say it’s been obstacle free, but so far would you say the journey have been a fairly smooth road?
This road has not been neither smooth nor straight. I say that now with a chuckle but there have been some heartbreaking struggles along the way. One of the most difficult was my separation from the dance studio I created, the beautiful community I nurtured with every ounce of my being. I ultimately gave it up to preserve it and it shattered my heart in ways nothing else ever has. I would have to say though that my biggest heartbreak is when someone says, and then ultimately believes, they can’t. Maybe because it reminds me of those two horrific years running the streets of San Francisco when I thought I couldn’t. I have countless testimonies of women and a few men I have literally chased down after they’ve left a class crying frustrated or discouraged. Sometimes I succeed and encourage them to believe but when they don’t and when I watch them walk away, I feel a death. Death of possibility. It’s excruciating. I’m currently working on a new work with Tropicaleiza that attacks that. I want to take people from death to life. I want to take them from no color to vivid colors, intricate layers, fully alive.

Thanks – so what else should our readers know about your work and what you’re currently focused on?
I am a dance artist, creator of the JSMethod and director Director of Tropicaleiza Dance and Drum Company. The JSMethod: Drawing on kaleidoscopic roots and diverse technical movements of Brazilian, African, and Contemporary movements, The JSMethod is a comprehensive dance training methodology aimed to fuse multiple perspectives of dance to create a unique energetic expression. This methodology is birthed out of 30 plus years of dance training, dance performance, dance creation, dance expression. Dancers can expect grounded African influenced expression combined with the playful and joyful essence of Brazilian Dance and music, melded together and fully supported with voluminous contemporary movement.

JSMethod provides dancers with the foundational movement tools to reach beyond the limits of any one technique so they will expand their dance vocabulary while investigating their own true essence that reaches far beyond the dance floor and or stage. Taught as master classes, group classes, private classes and residencies geared for all levels, the JSMethod is a joyous celebration that’s intense, liberating, ALIVE. Tropicaleiza Dance and Drum Company Tropicaleiza directed by JulieSimon is a multidimensional dynamic magnanimous group of powerful diverse women fully expressing themselves through the joyful acts of dancing and drumming. We exist to impart strength vigor and joy into women’s lives empowering them through compelling storytelling, movement workshops, and audience interaction.

Our repertoire honors the complex and vital art of the feminine incorporating grounded uninhibited African-influenced expression, fluid voluminous contemporary movement and the playfulness and joy of Brazilian dance and music. It is our goal to create a vibrant energetic connection between dancers/musicians and audience members. We believe we should live and breathe to our fullest expression always in all ways. Our Invocation: We drum, we dance, we empower. We are words demonstrated. We get to joyfully and boldly move our beautiful bodies. We believe in fullest expression always in all ways. We inspire to fully express all that you are and were created to be. We don’t mute. I am most proud of the women of Tropicaleiza. Like a musical call and response, I called and they answered. I chased every single one of them, told them I wanted them believed in them and fully invested in them. They are my fullest expression always in all ways. As I watch them surpass me, I think “I made it.”

What were you like growing up?
Growing up, I was very shy. It doesn’t seem possible but I was. I had this curly hair that I didn’t understand and it paralyzed me. I was a “good girl”. I did what my parents told me to do. I was a straight A student and a super athlete with a lot of energy. I still have a lot of energy. I’m known for having a lot of energy. As I got older and grew into my hair wasn’t quite as shy. I attracted and was attracted to those who were quirky, different and artistic. I had no idea I myself was an artist and would later build a full life and career around art. 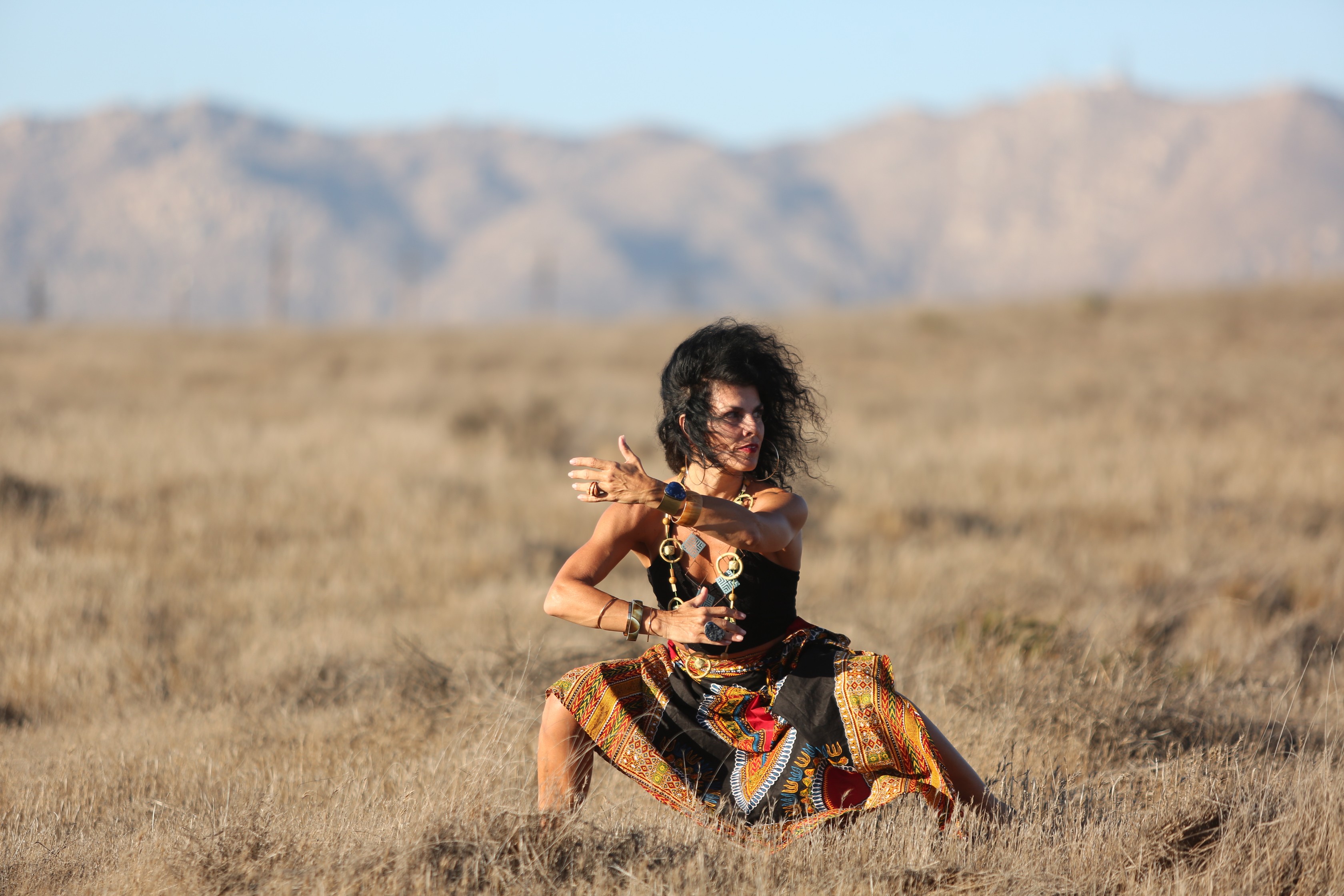 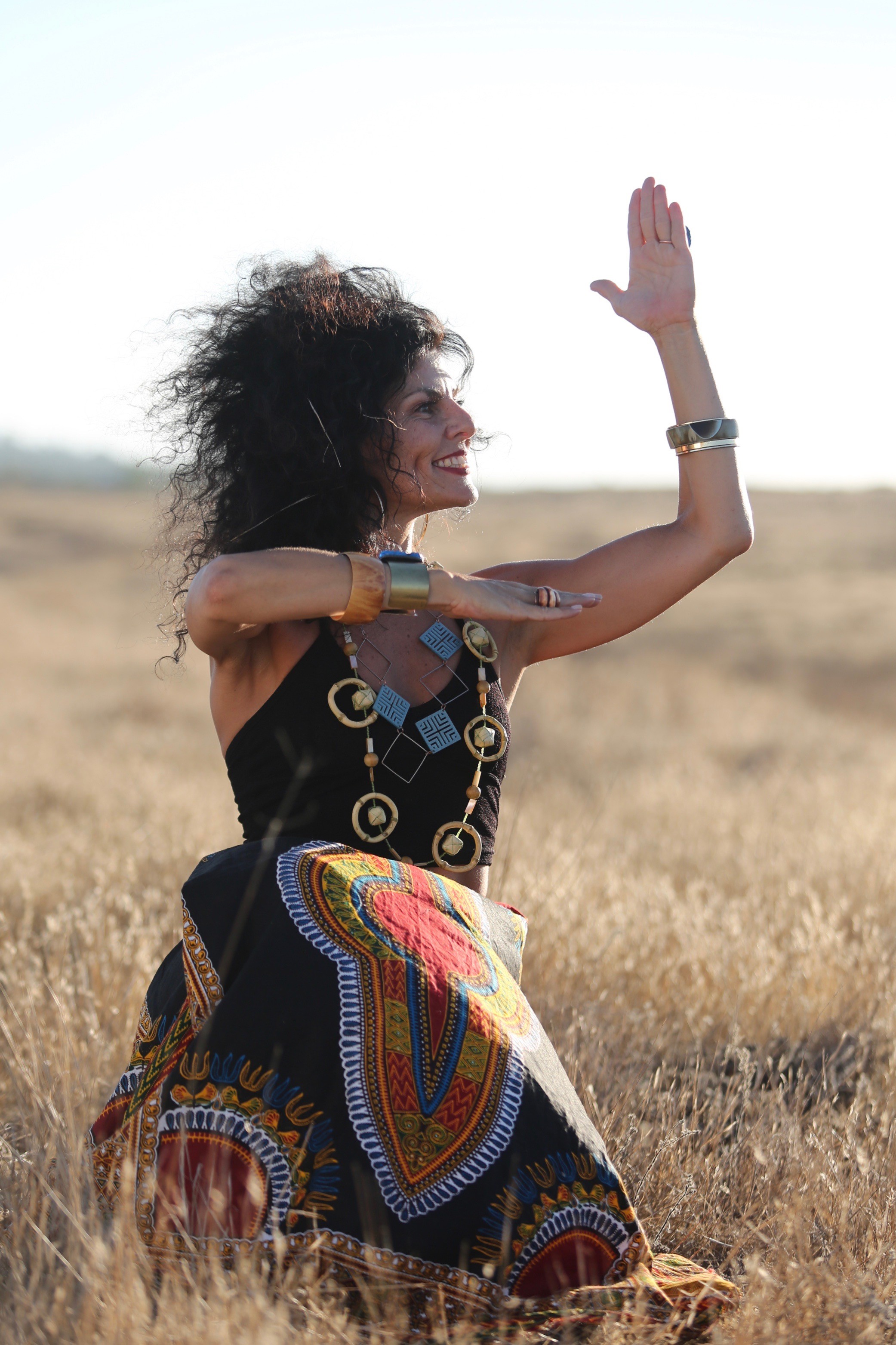 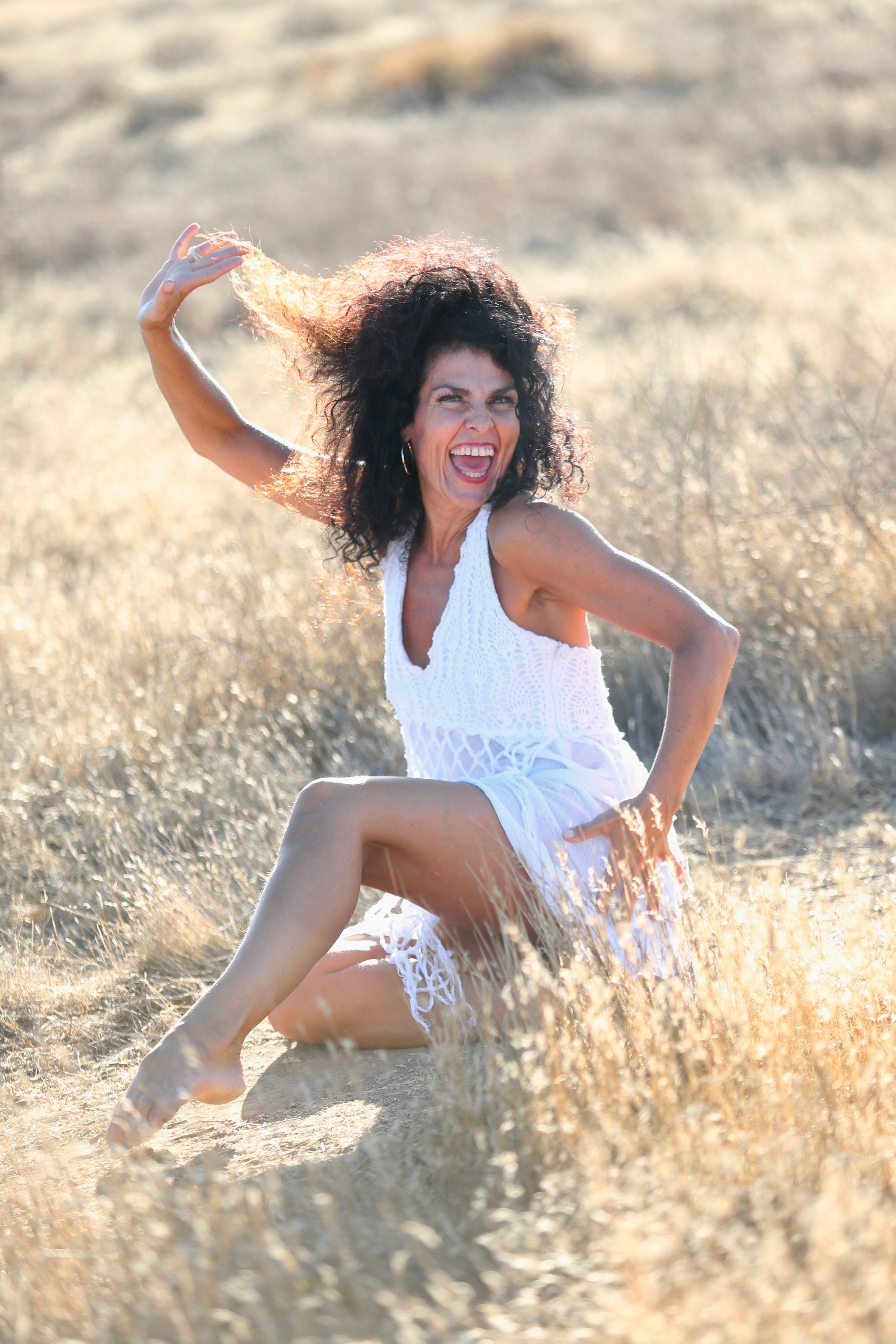 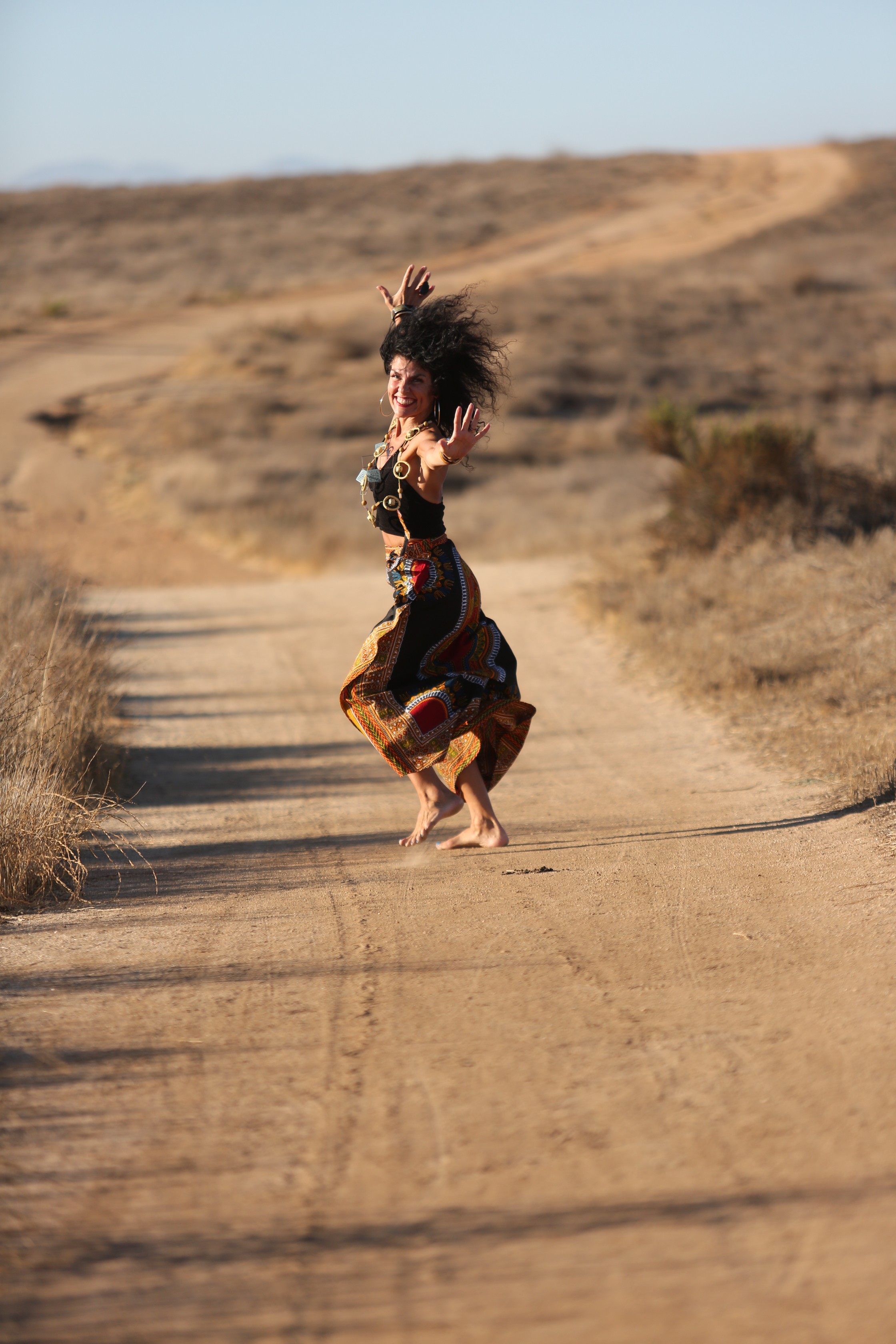 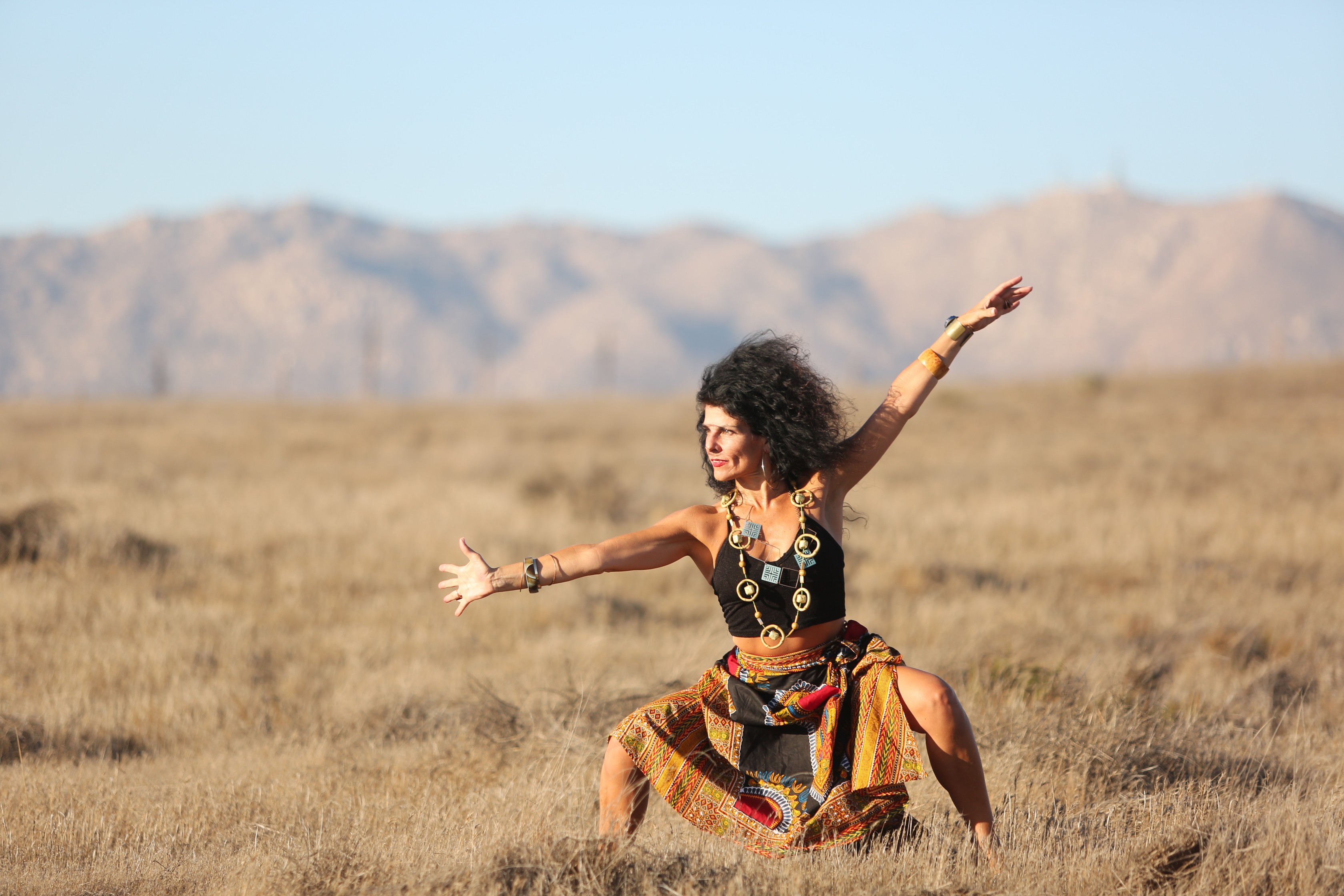