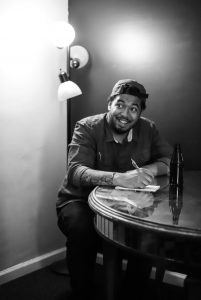 Today we’d like to introduce you to Alex Nicholas.

Hi Alex, we’re thrilled to have a chance to learn your story today. So, before we get into specifics, maybe you can briefly walk us through how you got to where you are today?
I did my first open mic at Stress Factory in May of 2014 after my late boss Bill recommended I should try stand up and then signed up shortly after my mom told me I wasn’t funny. I was terrified but to my surprise the first attempt went great, I got laughs and swore I was going to be famous within the next six months. Two weeks later, I did my first bar open mic and bombed terribly.

Obsessing over why the second night didn’t go as well as the first and just wanting to get another chance to do better is what started my pursuit of a career in stand up. After a couple of months, I was getting up every Monday at the bar I took my first bomb at, Stress Factory every Wednesday and random open mics that new comics I met along the way were running themselves. While doing stand up at night, I was going to community college for graphic design during the day and also bartending a few days a week at night. A week before my second semester final, I got the opportunity to open for a headliner at Stress Factory to a sold out crowd in front of the owner and headliner and all the hours of work from the open mics payed off. After the show, the headliner asked how old I was and what I was doing besides stand up. When I told him I was in college but wasn’t sure if I liked what I was studying he simply just told me “You can always go to school later man, but if you really want stand up to work you have to commit.” A week later, I walked out of my final. The pressure from knowing I left college to tell jokes, my parents eventually finding out the decision I made and just coming to the reality that although I was still young, I was betting on myself with no real backup plan oddly kept me more focused and productive. The comedy club (Stress Factory) took notice and started putting me on weekend shows hosting as a paid regular and I started meeting more headliners, doing bar shows in other surrounding states, some colleges and most importantly where I grew into myself as a comic and started becoming more confident on stage and in my writing.

A few years later, I did a show at Rutgers University where they booed off a couple of comics in a row before I went up. Because of the time I was putting in at the comedy club and on the road, I was able to turn the crowd and get them back and have a good set. Both of my parents were there and that was the night they were both able to see that I had a chance at possibly making stand up my job. Afterwards, my mom told me the same thing the first headliner I opened for told me, “I get it and I can see it now. If you’re gonna do this, then do it.” Since then, I’ve been made a featured act at Stress Factory, opened for various headliners, started doing a podcast called ‘Keep It Basement’ with my friends and working on my first comedy album. All while still bartending a couple of days a week…

Alright, so let’s dig a little deeper into the story – has it been an easy path overall and if not, what were the challenges you’ve had to overcome?
Definitely not a smooth road to say the least, but I wouldn’t take it back for anything. In the seven years I’ve been doing stand up I’ve learned so much on and off stage primarily from failing. Stand up is weird because you have to do bad a lot to figure out what works for you. So pushing through strings of bad shows, learning how to navigate the scene and still wanting to get better through all of that takes its mental toll. A lot of the time you don’t know what’s going on and how you’re being perceived and you end up being too hypercritical of yourself. So I’d say the biggest struggle was ultimately trusting myself and not overthinking it. Once I stopped overthinking was when other comics that I looked up to started telling me I was funny. The other challenge would be balancing your own personal life with constantly working. A lot of times working comics have a day gig and then we do shows at night. Throw a girlfriend or family obligations on top of all that and you find yourself overwhelmed before you know it.

As you know, we’re big fans of you and your work. For our readers who might not be as familiar what can you tell them about what you do?
I’m a working comic, or in other words, I tell jokes to strangers wherever they pay me. In terms of being known, I would say the general public has no idea who I am haha. But if you’re a comic, a booker or just on the scene in the tri-state area, you might know me. Throughout this journey, I’d say I’m most proud of approaching stand up as the art form it really is and putting in the man hours of learning how to write jokes that reflect my intellect and also who I am, what I’ve experienced and what I come from. I think what sets me apart is also how I try to approach writing and telling my jokes. Being that I was born in 94 with young parents hip hop was car seat music for me so learning how to digest and decode what was being said and ultimately learning how to say the most with the least influences my writing for sure. As for how I perform, I never wanted to be a physical comic, sound like I’m reading off a piece of paper or sound like I’m just talking at you. I just want everyone to feel like they’re hanging out with me, so I just try to keep it conversational and let the writing do the heavy lifting. My dad is a barber by trade and I’ve seen him have a whole barbershop laughing while he was sitting in his chair so I always just try to replicate that on stage. Hanging out in the barbershop.

Are there any apps, books, podcasts, blogs or other resources you think our readers should check out?
My favorite books ‘Steal Like an Artist’ by Austin Kleon and ‘Confessions of a Sociopath: A Life Spent Hiding in Plain Sight’ by M.E. Thomas. As for podcasts, it would be The Joe Budden Podcast, Brilliant Idiots and No Need For Apologies. 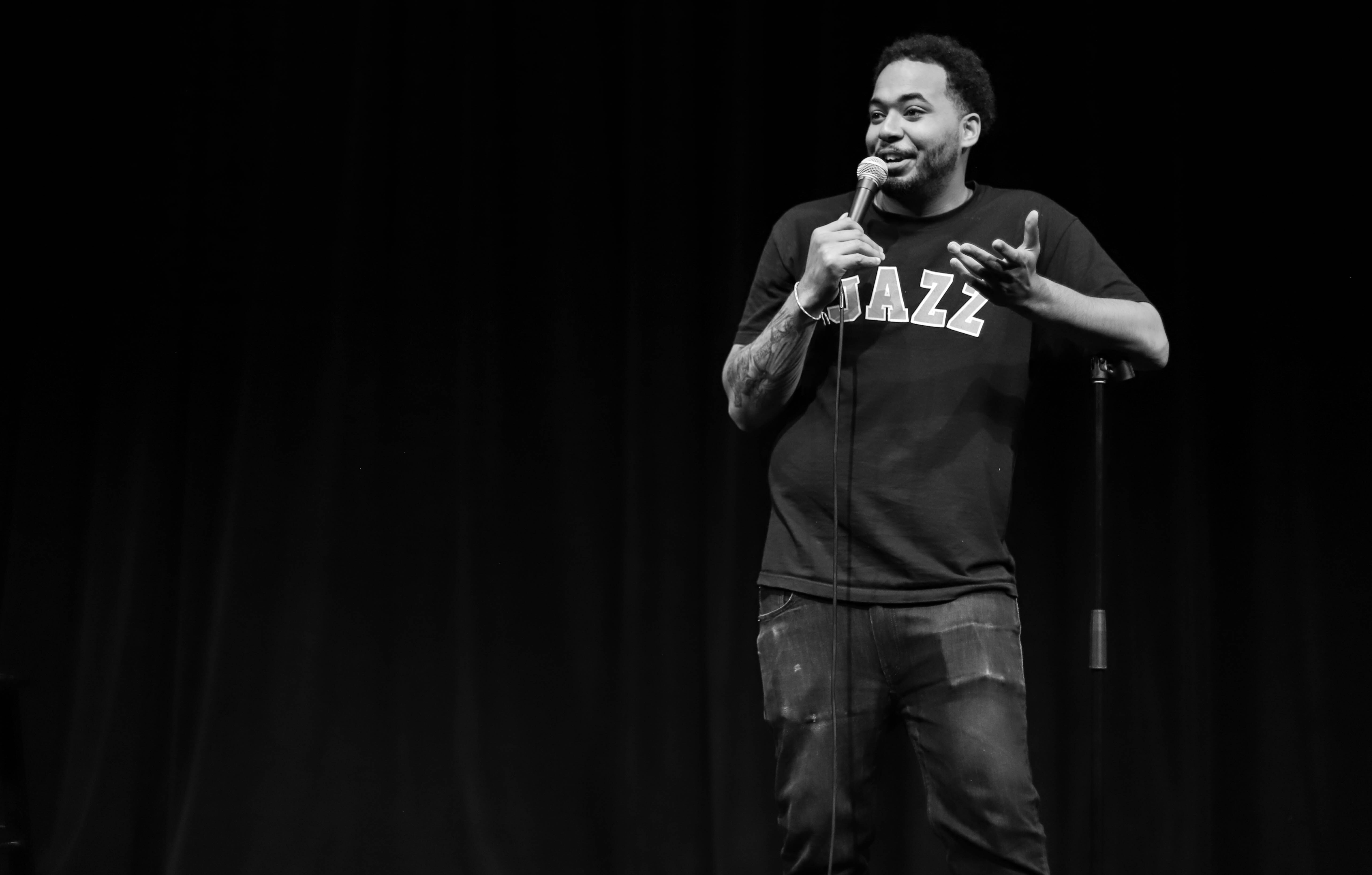 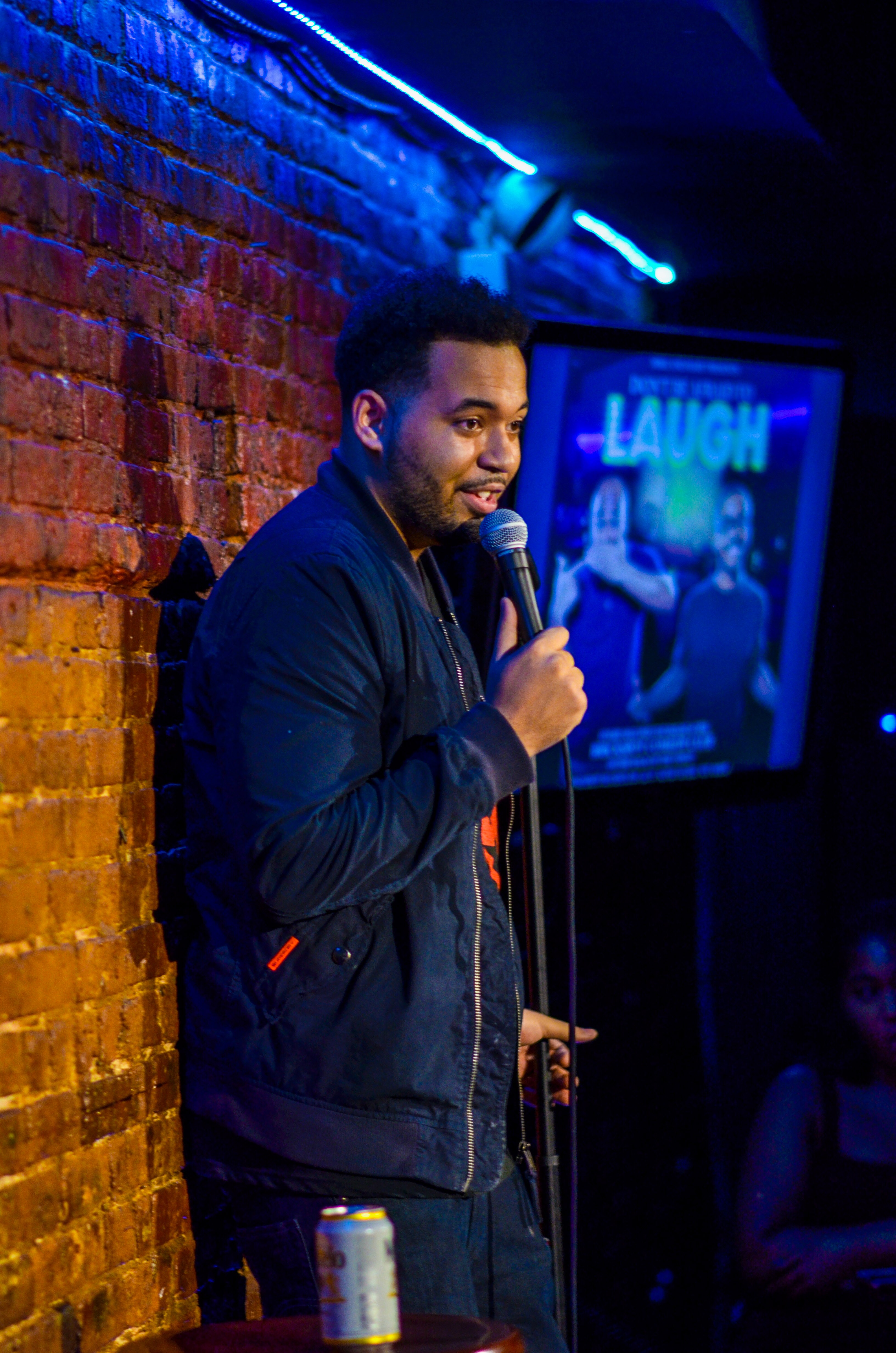 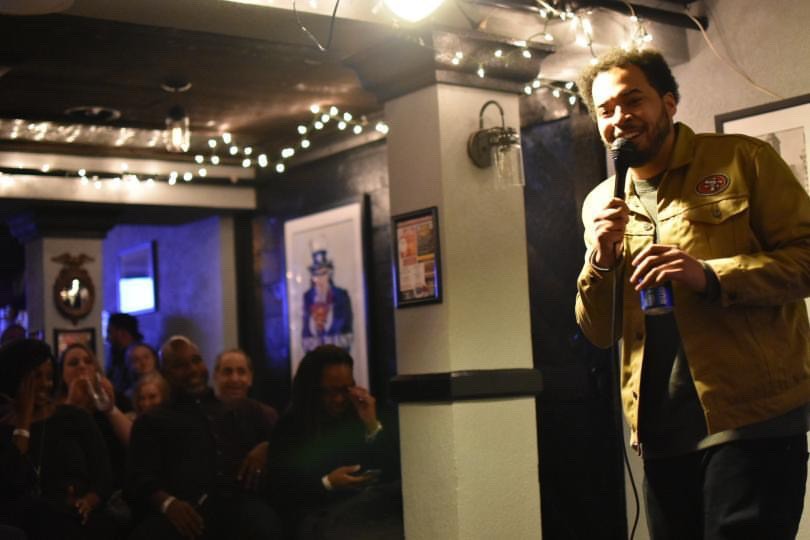 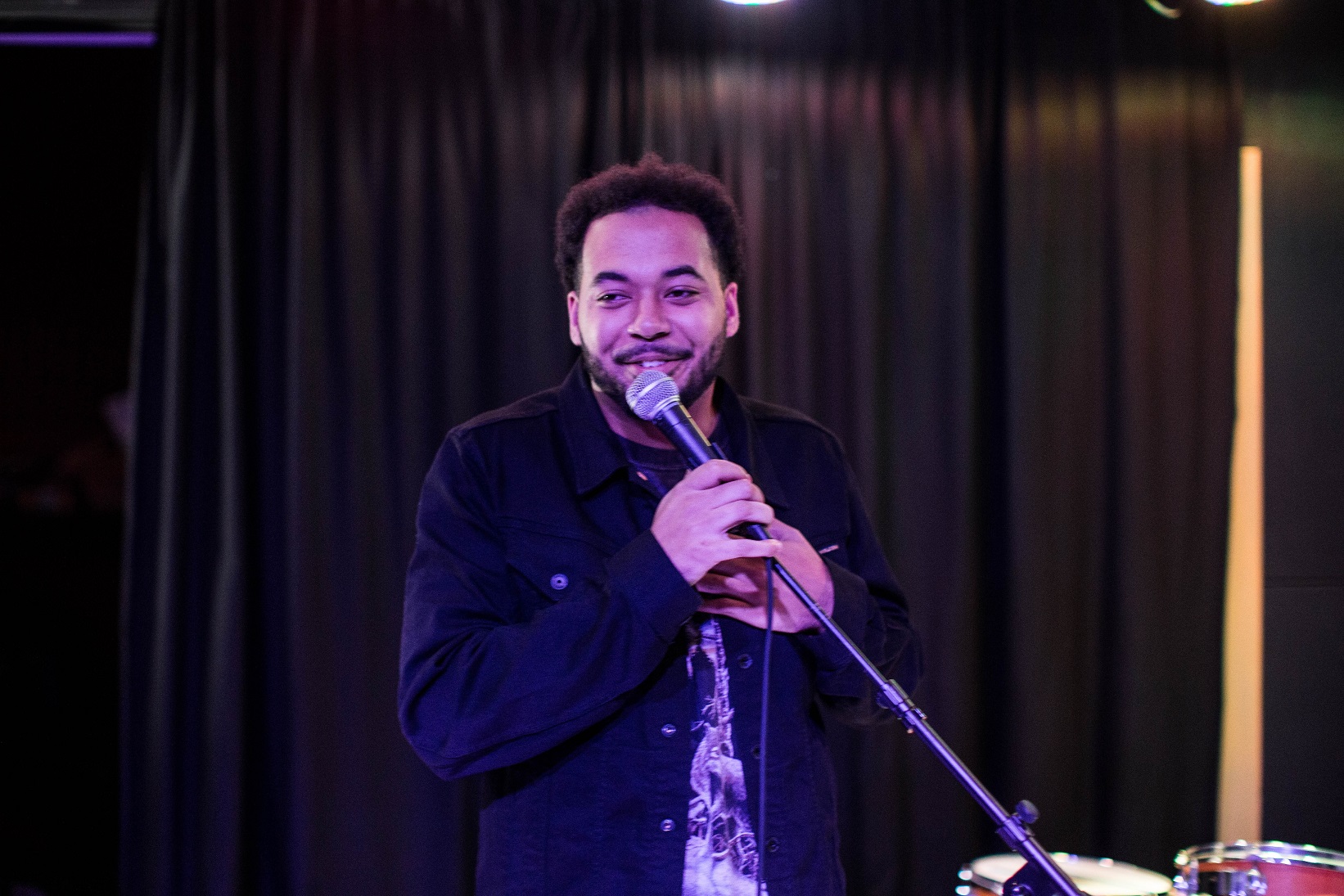 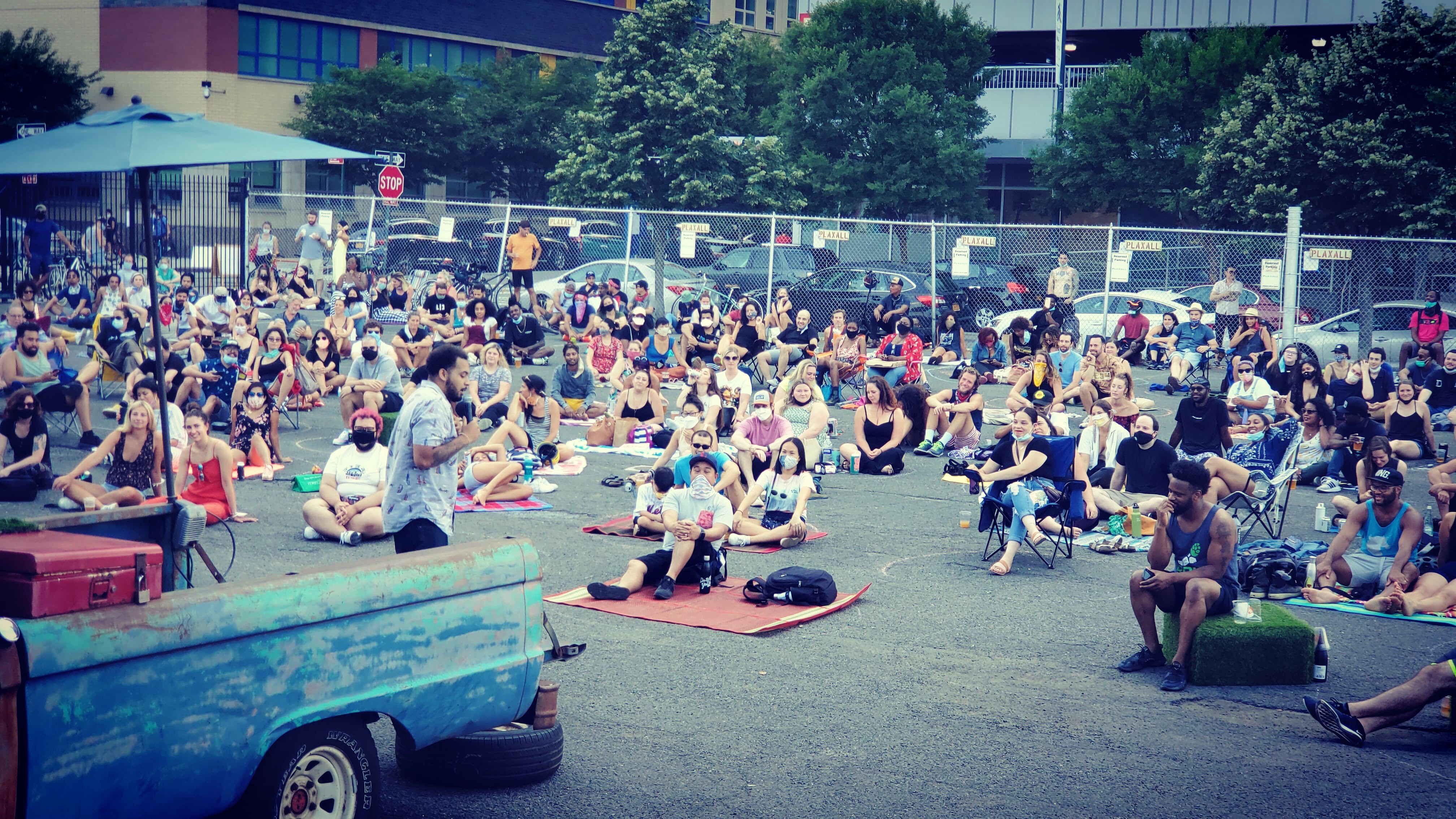 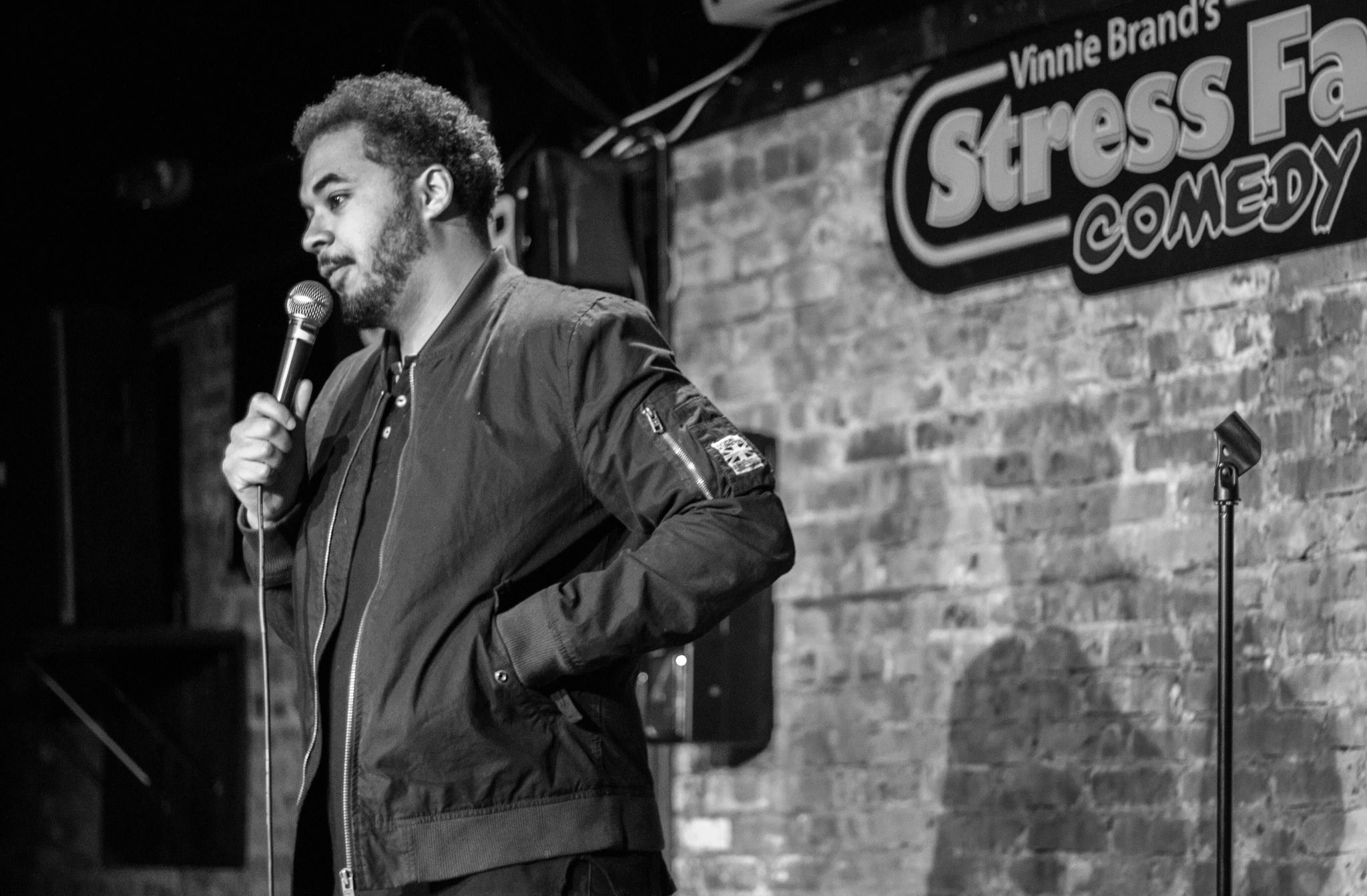 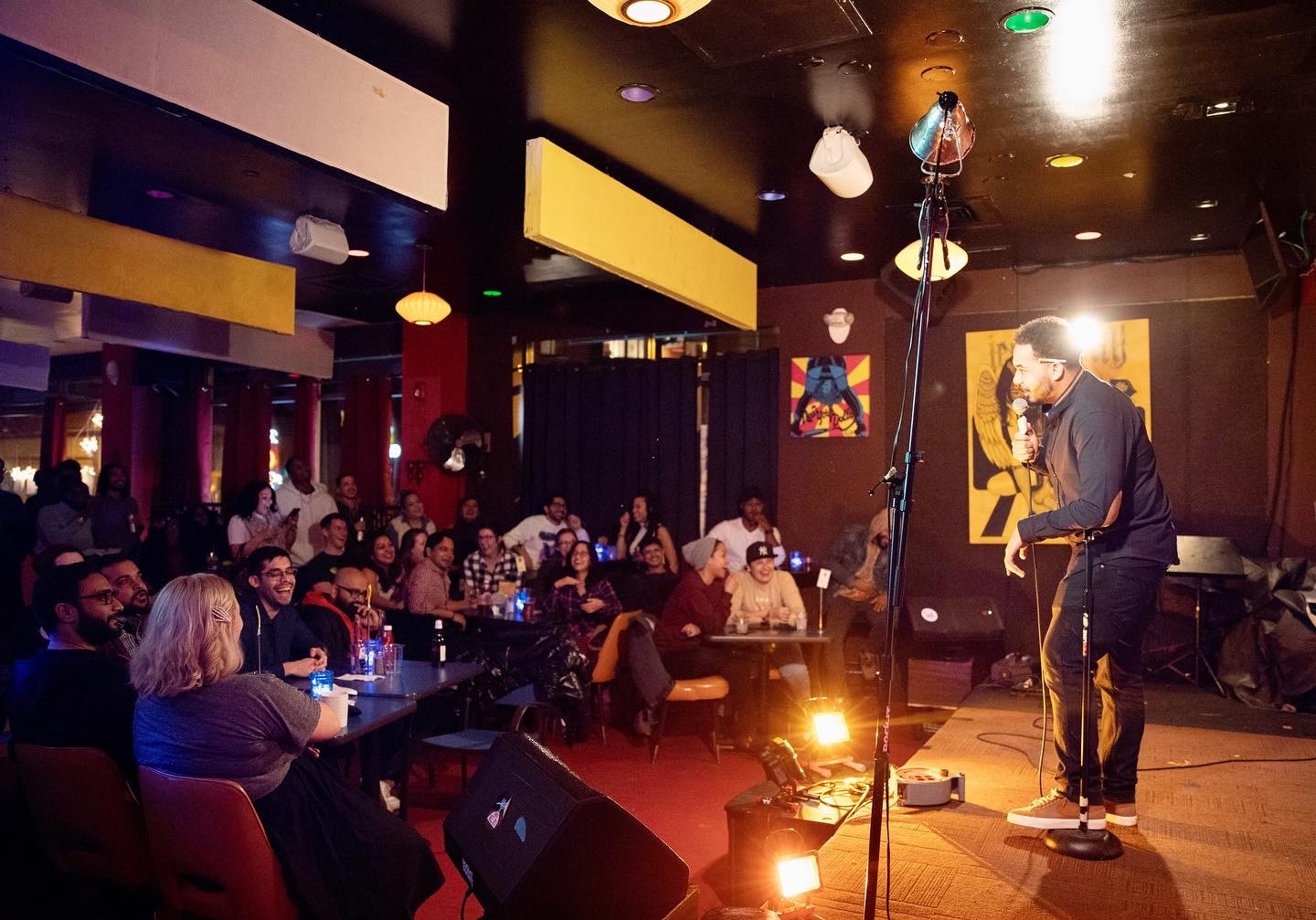 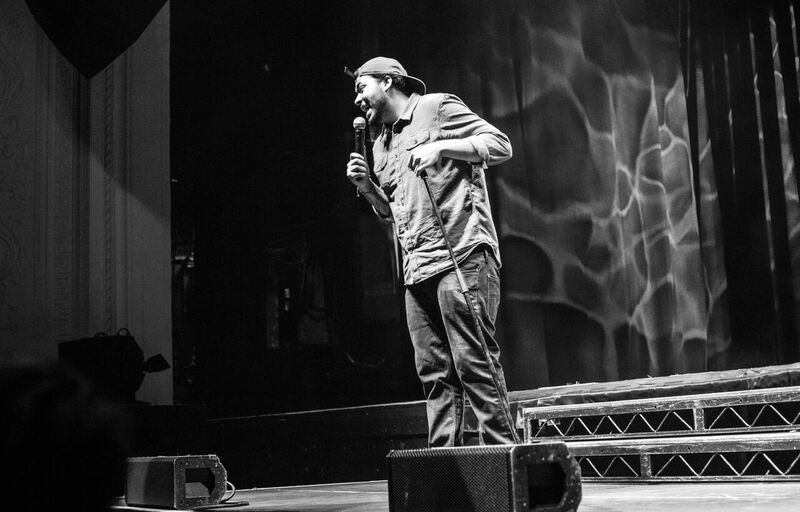