Today we’d like to introduce you to Edmond Roche.

Hi Edmond, it’s an honor to have you on the platform. Thanks for taking the time to share your story with us – to start maybe you can share some of your backstory with our readers?
I grew up in Sydney, Australia. I was obsessively passionate about sports – especially swimming and soccer. I moved to Los Angeles with my family when I was in middle school. I always aspired to be a professional soccer player. I left school at 15 to chase my dream – playing soccer in Central America, South America & Europe.

At 18, I still hadn’t landed a contract with a top European club so I moved home to Los Angeles with my family and accepted that my window of opportunity to become the next Ronaldo had certainly passed. I joined the LA County fire department and became an ocean lifeguard. I switched focus from soccer to triathlon and became one of the top amateur triathletes in the United States. Eventually, I attracted sponsors and committed to triathlon full-time. My goal was to compete in the Olympics for Australia. I competed in my first professional triathlon race when I was 21 years old. I knew by now that I was a long shot at ever making the Olympics – but I was stubborn and I absolutely loved the adventurous lifestyle of training all day in the great outdoors. This same year my parents fell upon financial hardship, declaring bankruptcy and being evicted from their home. My athletic pursuits suddenly felt very selfish. I felt a strong desire to contribute financially and I lost enthusiasm for training and racing.

At 22, a friend of mine invited me to work on a startup idea with him and the rest is history. I now had an opportunity to make serious money. I went all-in on the startup life. My friend and I built Timeagram, the world’s first software enabling Instagram users to schedule their posts. We generated a lot of buzz and attracted many users but ultimately, we ran out of money and couldn’t raise the capital we needed to continue. I worked for a half dozen different early stage tech startups in the Los Angeles area over the following year. I was in a lot of credit card debt and had no education/resume to point to if I wanted to apply for a “real” job. Startups were happy to compensate me with equity if I could add value – so I continued to work in varying capacities for early stage consumer tech startups. While living the “startup life” I continued lifeguarding and I worked in restaurants on nights and weekends to make ends meet. Eventually, I cofounded FashionTap, a social shopping app. I had a lot of expertise in consumer tech at this point and was confident that this project would be a life-changing success. I was the COO at FashionTap. We raised capital, hired a team and built an amazing app that had over 100,000 active users at its peak. Our app appeared on ABC’s hit show “Shark Tank” where we were offered a deal but we turned it down as we didn’t like the terms. Unfortunately, this startup also ran out of money and we were unable to raise capital before our team started leaving. I eventually broke down and left the company. I’d been working nonstop for two years without pay – still lifeguarding and bartending on weekends to make ends meet. By now, I was homeless, living in the back of my family’s old SUV. My friends and my family had no idea – they all thought I was “killing it”. But I was destitute – and depressed about the fact that I’d still done little to help my family despite many years of enduring a brutal workload and taking many risks which cost me dearly.

At this point, I was 26. I considered getting a more traditional job with a recruiting firm or some other white collar institution where I could leverage my natural sales skills, start at the bottom and “climb the ladder”. But something inside me compelled me to believe in myself and try again on another startup. I knew I had what it took and I couldn’t give up. I worked at the Four Seasons as a server and saved every dollar I made for six months – paying off several credit cards which I’d used to fund my startups. I eventually joined another startup as head of sales. This time the company was CPG brand and I helped grow their sales 10x in less than six months. I started making money, but I was not an owner at the company where I was creating immense value. After everything I’d been through, I felt a desire to do my own thing. I needed to start my own company. I did some soul searching to try to understand what my best options might be. I eventually had an epiphany which seems extremely obvious in retrospect: my passion was fitness. I should do something in fitness. I started a personal training company (called “You’re Dominating”). It took off. I started an organic meal delivery service (called “Next Level Mealz”). It took off. Then, I started DMN8. DMN8 is a distributed fitness community – and we’re building technologies that will transform the fitness industry. This past year DMN8 has exploded in popularity here in Los Angeles and we’re excited to expand to new markets in 2021 & beyond 🙂

I’m sure you wouldn’t say it’s been obstacle free, but so far would you say the journey have been a fairly smooth road?
Failed athletic careers (two of them). Feelings of embarrassment that I hadn’t achieved a very public goal/objective. Feelings of shame that I wasn’t contributing to my family financially. Feelings of shame that I’d let my family down with my career decisions. Feelings of guilt that hadn’t taken advantage of opportunities afforded to me as a kid. Friends and others laughing at your ideas or goals. Friends and others telling me I’m wasting my time. Family being evicted from our home. Watching parents suffer from depression and mental health issues relating to financial stress. Company failures including expensive mistakes and errors in judgment. Failing to raise capital because investors don’t believe in myself or my team. Homelessness (twice). Once for eight months and once again two years later for an entire calendar year. Depression due to feeling like I couldn’t get a break. Intense anger and frustration when I felt like I had no help and nobody understood what I was going through. Unable to deposit money into my account due to being overdrawn so I stored cash tips in my car. Then when I was at work one night, my car was broken into and my tips were all stolen. I had a breakdown. Failed relationships because friends of significant others cannot relate to the work hours required to build a startup and also support them/myself. Ex. employers launching threats and spreading defamatory lies about me after I left their organization. Ex. employees launching false and ridiculous claims about me and my company after they were laid off … This is just a list of major items/incidents that come to mind. But it’s been ten years of nonstop trials to get to where I am now.

We’ve been impressed with DMN8, Inc., but for folks who might not be as familiar, what can you share with them about what you do and what sets you apart from others?
DMN8 (pronounced “dominate”) hosts workouts and social events for our distributed community of members. Imagine arriving at a beautiful local park with bright green grass under a blue sky. To your amazement you find an outdoor gym with all the bells and whistles. It’s like somebody copy and pasted your favorite “boutique fitness studio” into your favorite local park. Your favorite song is playing, a friendly team of people in DMN8 shirts greet you with a warm smile and invite you into the gym, introducing you to other members on site. The positive energy on site is palpable. You’ve just arrived at DMN8. (And yes, this is the coolest thing we have ever seen as well!) DMN8 hosts outdoor group workouts in beautiful parks, beaches and open spaces. Our daily workouts include HIIT workouts with weights, yoga, dance cardio, sculpt, pilates and more. Our team of world-class trainers and community managers are trained to cultivate remarkable community experiences for all our members. Our entire community runs on an app we built – and we have countless exciting new products/services planned for our community in the future.

What were you like growing up?
Extremely competitive. Extremely passionate. Obsessed with sports. Extremely curious. Extremely single-minded / always thought for myself. Hated being told what to do or not to do. Stubborn. Very social. Very cheeky/ loved making friends laugh. Mischievous. 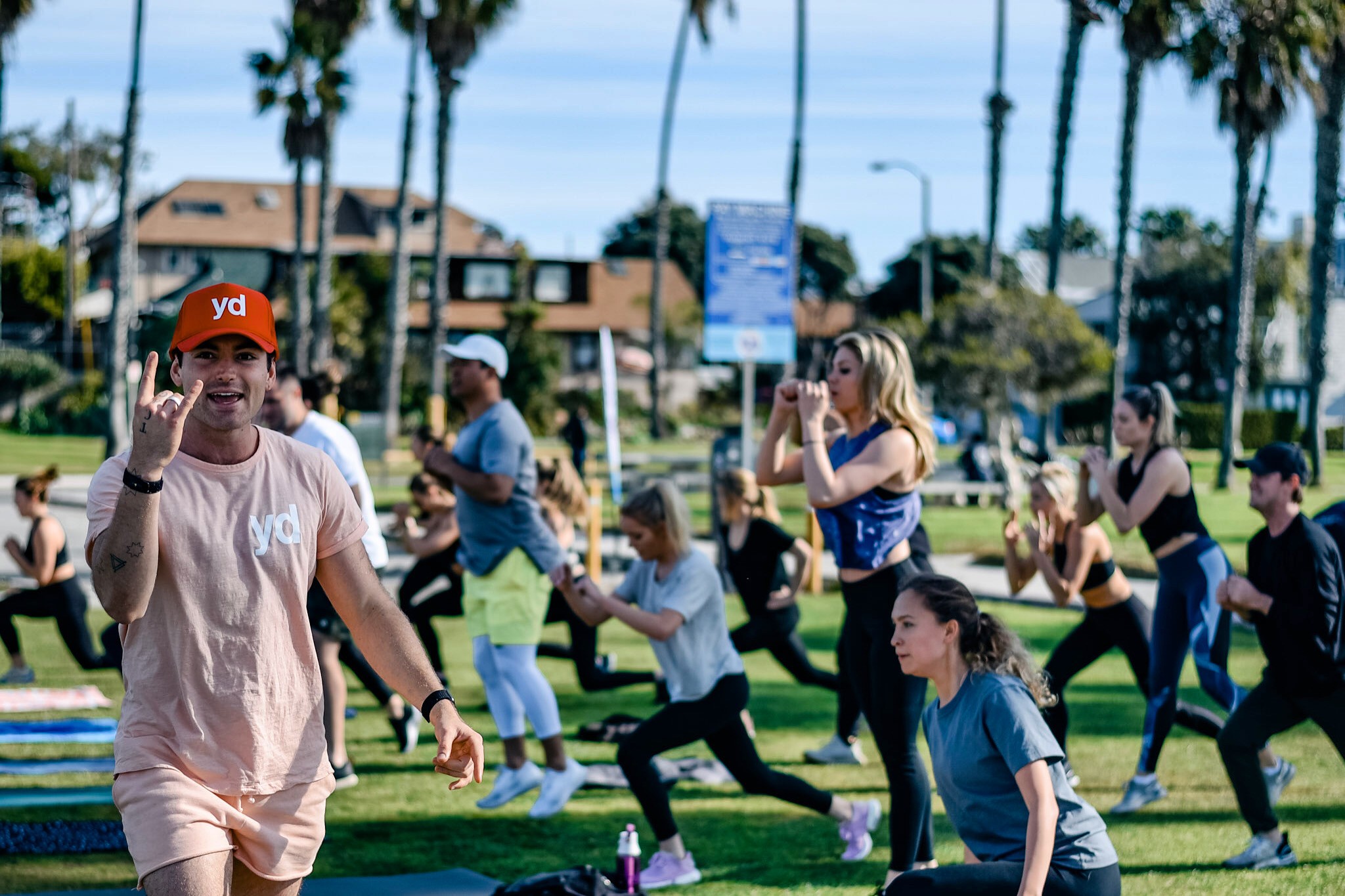