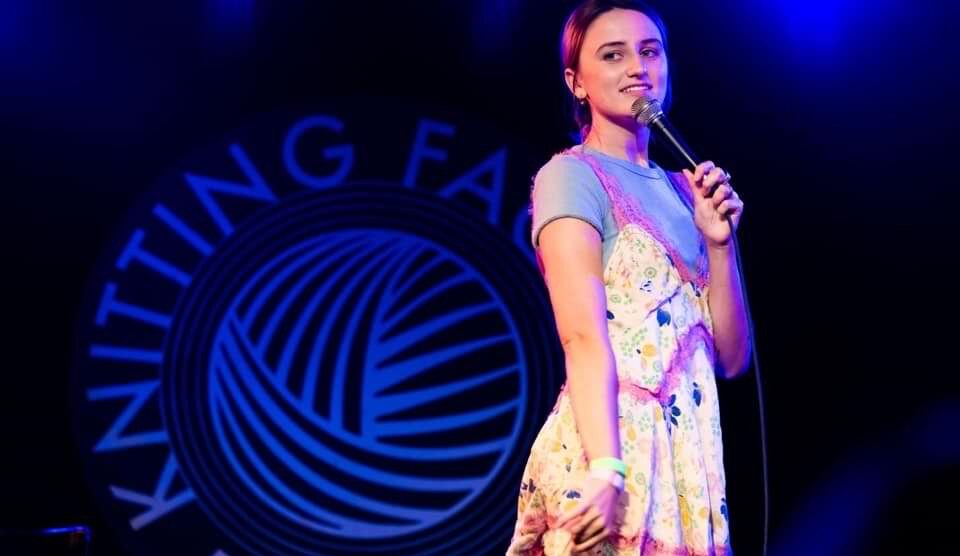 Today we’d like to introduce you to Kylie Vincent. Them and their team share their story with us below:

Kylie Vincent is a 22 years old stand-up and solo show artist based on the road, touring all over the US and most recently, Los Angeles, for her residency of her solo show, Bird, at The Lyric Hyperion Theatre. Vincent is from California, but knows her homebase to be New York City and can be found performing in all the boroughs, regularly, at QED & Tiny Cupboard. She is currently doing Bird, A Solo Show tour after performing in nine cities for eight months straight and audiences have called it “hilarious, memorable, and Vincent is a badass.” The stand-up storytelling show is a sexual assault survivor story that have left audiences with all the feelings. Kylie tours out of her built-out SUV with her disabled dog and wants you to know she was broken when she got her.

Can you talk to us a bit about the challenges and lessons you’ve learned along the way. Looking back would you say it’s been easy or smooth in retrospect?
It’s been very rewarding and very challenging. Living out of a car in order to commit to my show and comedy full time is a sacrifice and I feel like you have to have a certain personality for it. I never have my own place to land and I wander aimlessly during the day through cities I don’t know at all, and then end up leaving the cities being familiar with all the people, places, and comedy scene there–it’s quite beautiful. Money is the biggest obstacle. I make my money full time from my show and stand-up and it’s a very, to say the least, humbling amount. Being a minimalist and living out of my car has prepared me for such, but during times of inflation, traveling from one city to the next has been sort of a crazy endeavor. I love driving on my own, I one time made a stretch to do a show in Austin one night and then did the 14-hour drive to Atlanta for a show the next night. Those sorts of “road bumps” aren’t road bumps to me. Externally, I’ve brought everything together, somehow. I think internally is the biggest struggle. Living on the road and not having stability while doing an hour about overcoming my abuse can be at times overwhelming and lonely. People have really been there for me through this. I would not have been able to get through had I not met the most amazing people. I’ve been fed meals, a shower, a bed when I need it, and lots of laughs and support–I feel lucky to have experienced people in their element and be a small part of that.

Thanks for sharing that. So, maybe next you can tell us a bit more about your work?
I’m 22 years old and started stand-up when I was 18 after moving to New York City. Two years ago, I was in lockdown with my then boyfriend and his parents. Obviously, quarantine was a time of reflection and I was doing a lot of that. I came out as queer, I was in my first relationship, and I had been journaling a lot about my childhood. I started journaling memories and imagined my family members as animals. I think it’s a sort of dissociative thing, where it was easier to describe the traumatic memories through this imagery. I sat my then-boyfriend down in his parent’s living room and I performed my solo show to him. Two years later, I’ve performed it in over eight cities to hundreds of people. My show was the first time I was open about being a childhood sexual abuse survivor and it made me really nervous, sick even. The first couple of times I did the show in New York City, it was very emotional, people were resonating with it and I was quite overwhelmed. But I also had never felt this inspired in any of my work and I knew it was something I had to commit to.

This year, my boyfriend and I broke up, the lease on our apartment was ending and I had gotten a few small bookings for my show in the upcoming months before Edinburgh Fringe Festival. I decided I was going to build out my SUV and hit the road from January until I needed to be in Scotland in August. I’ve now been on the road 150 days and performed in over 20 cities. I’m really proud of the fearless life I had chosen to live because it could’ve been really easy to hide behind this and continue doing stand-up without the story that sort of drives my life every day. I always felt a gap in my 10-minute showcase stand-up sets in New York and what I actually wanted to accomplish as an artist. I feel like Bird is that perfect balance of vulnerability and comedy, which all things in life are. The show has been hugely helped by my director, Barbara Pitts McAdams and I am grateful to have someone in my corner rooting for me that gave me the opportunity to bring my passion project to The Fringe Festival.

Can you talk to us about how you think about risk?
I think my whole lifestyle is a huge risk. I’m sort of living day to day on how much money I’ll have and where I’ll be next. I’ve given myself over to the will of my show, wherever she goes, I go. At this point, I think I’ve been immune to normal people’s fears. Driving across the country alone and doing my solo show about my abuse doesn’t scare me anymore. What scares me is a 9 to 5 and drinking wine with a husband or a wife after that and that being my life. Not because it’s a bad life, it works for a lot of people, but I am not one of those people. At this point, I’ve sacrificed everything to the mercy of my show and this lifestyle that I have nothing to lose, so I might as well be brilliant and bold while doing so, there’s no embarrassment once you’ve peed in a bucket in your car and eat rice crackers for 2 meals a day. Not to glorify that, but my priorities are different. Like for example, some people are foodies, they really enjoy spending money and going out to nice dinners, which is great! Whenever I’m in a new city I never see it through that lens though, I’m seeing it through comedy. What the city looks like, who the people are, what they connect to, what do they find funny–that’s what’s important to me. 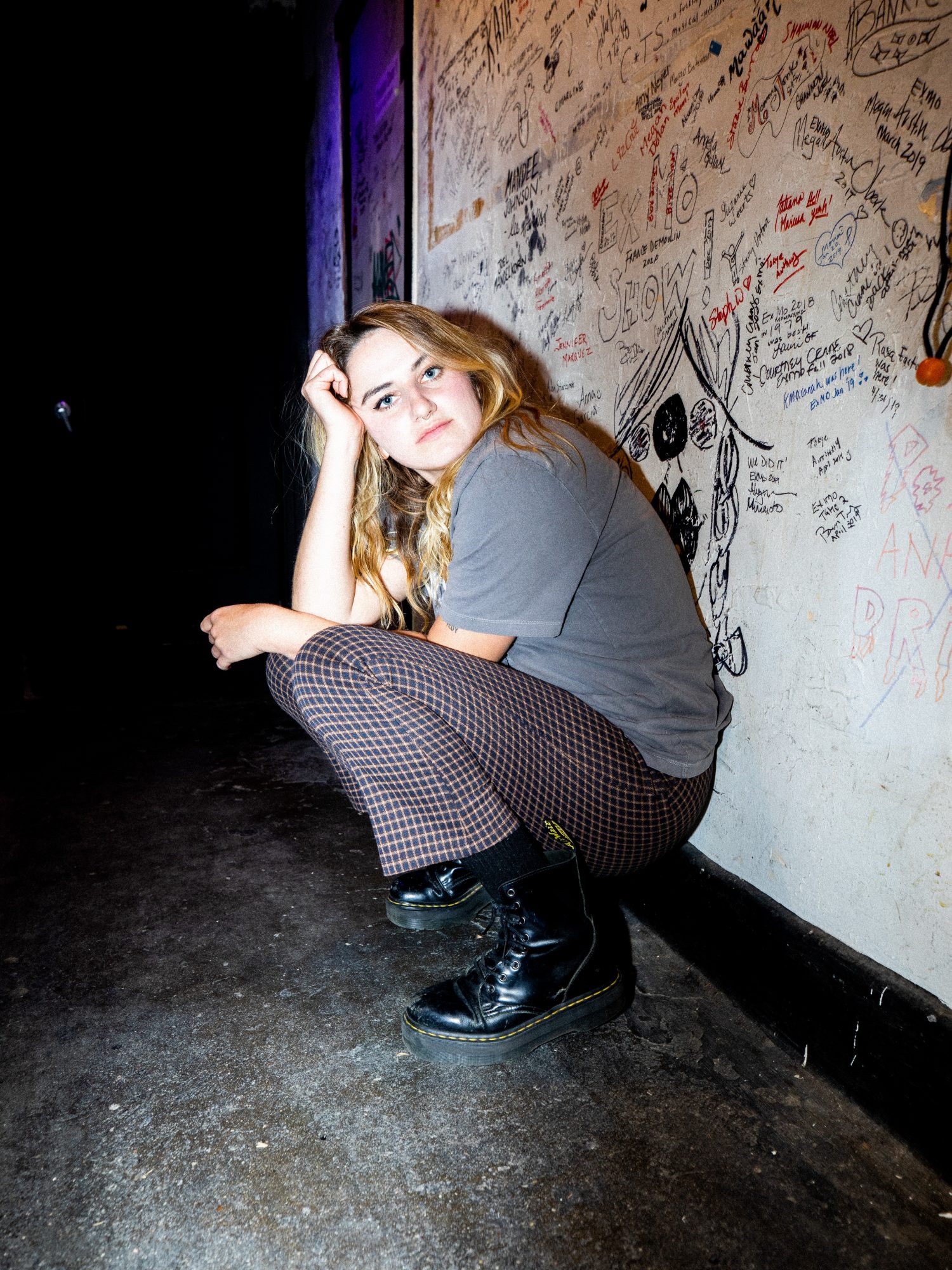 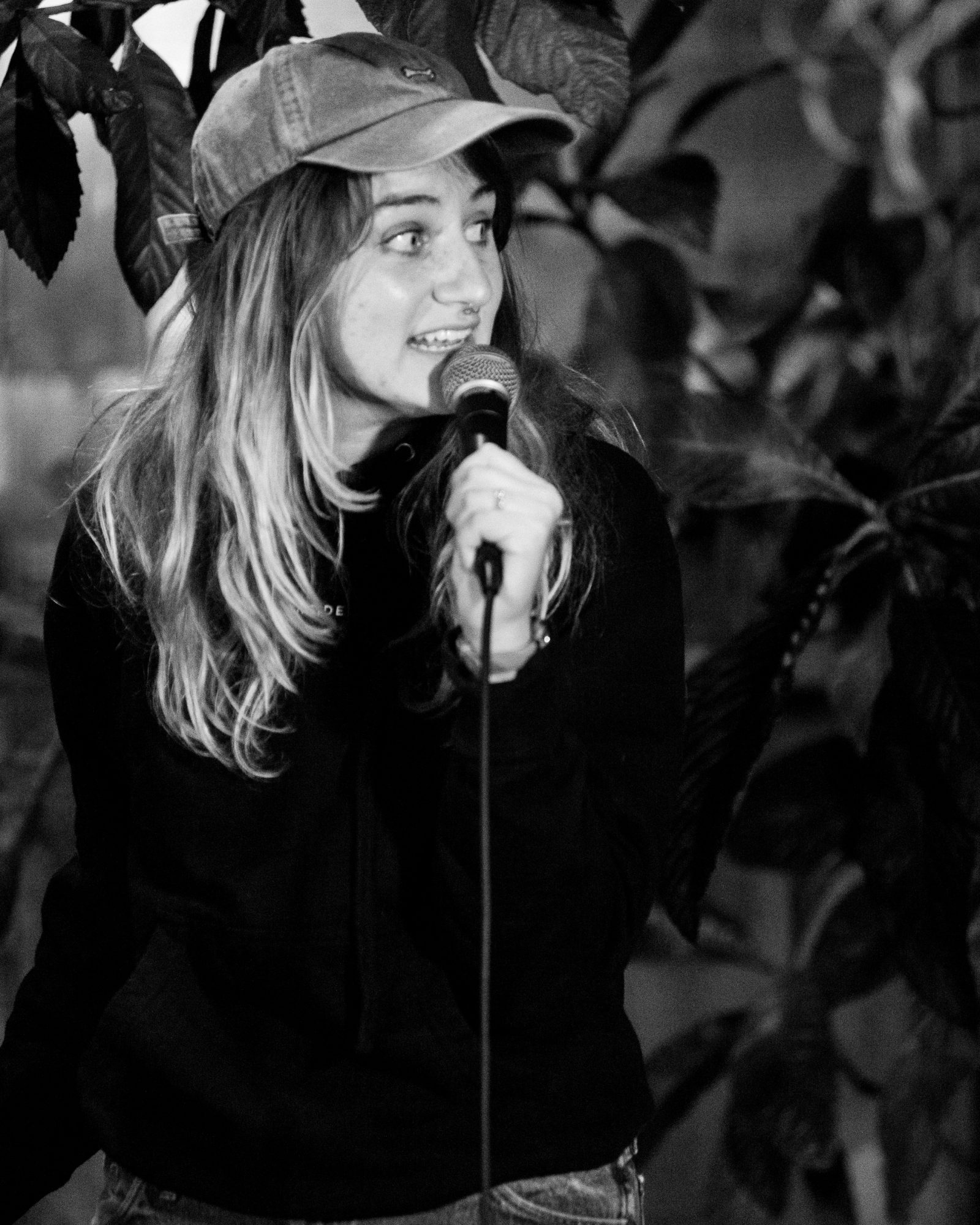 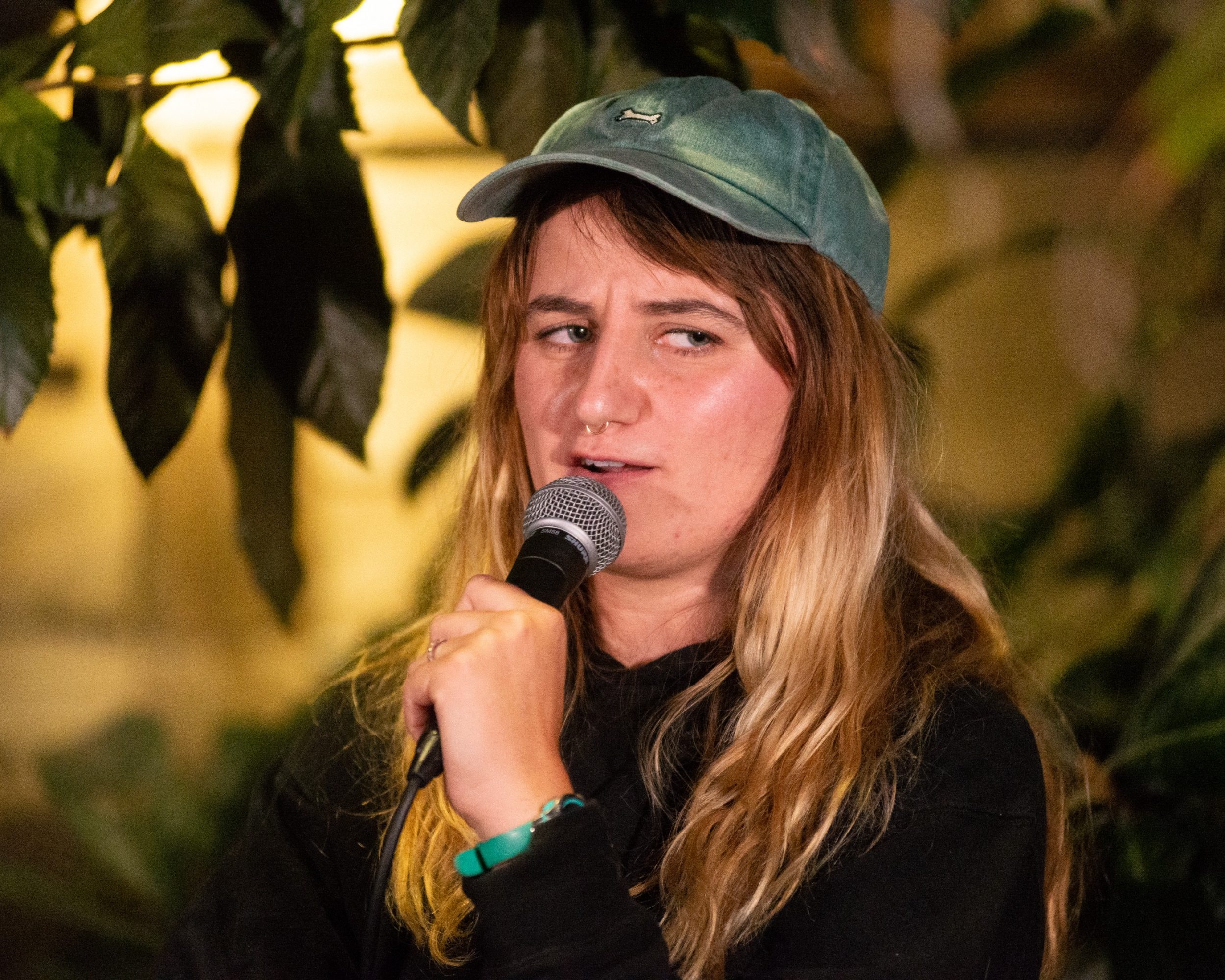 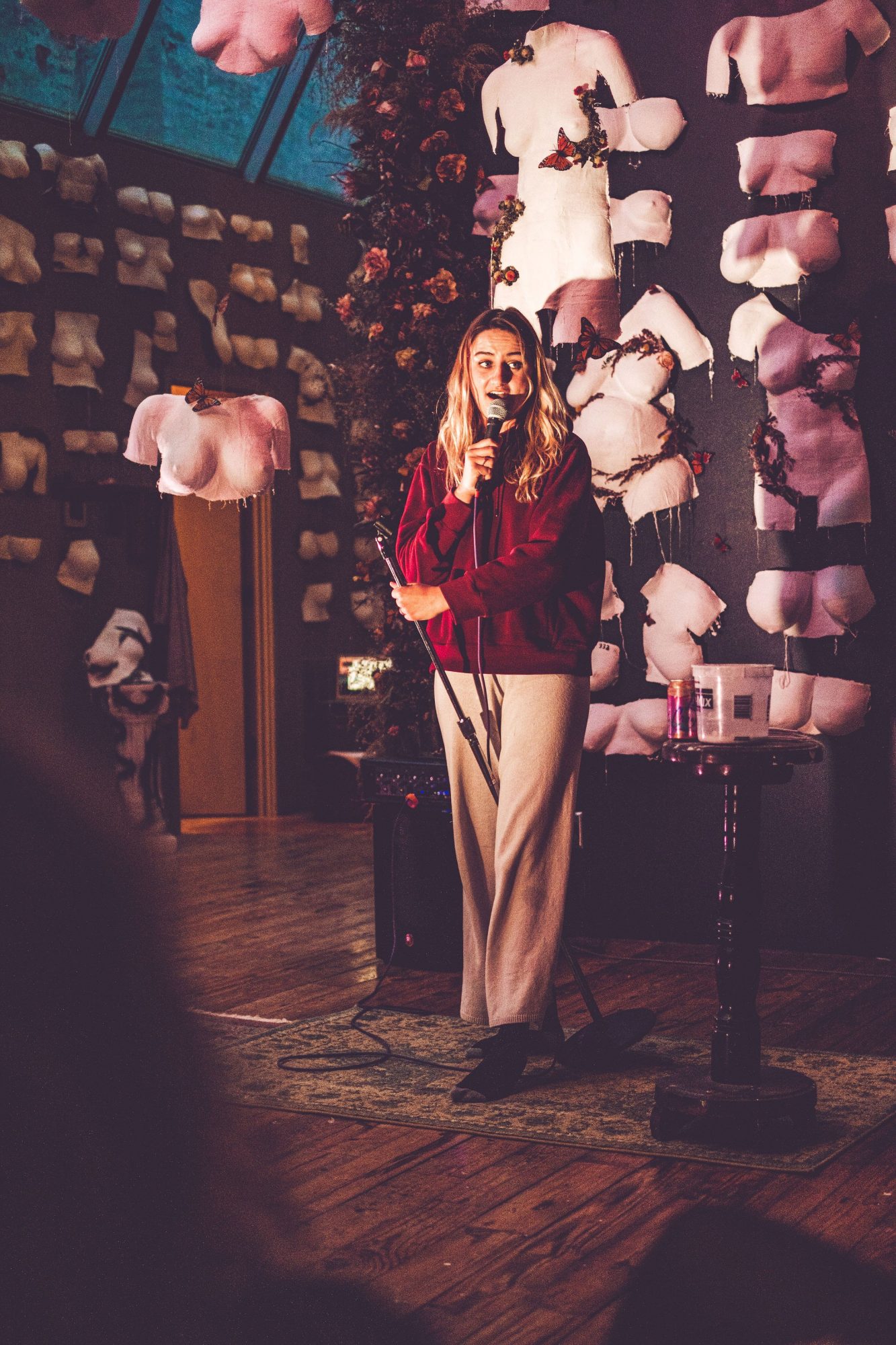 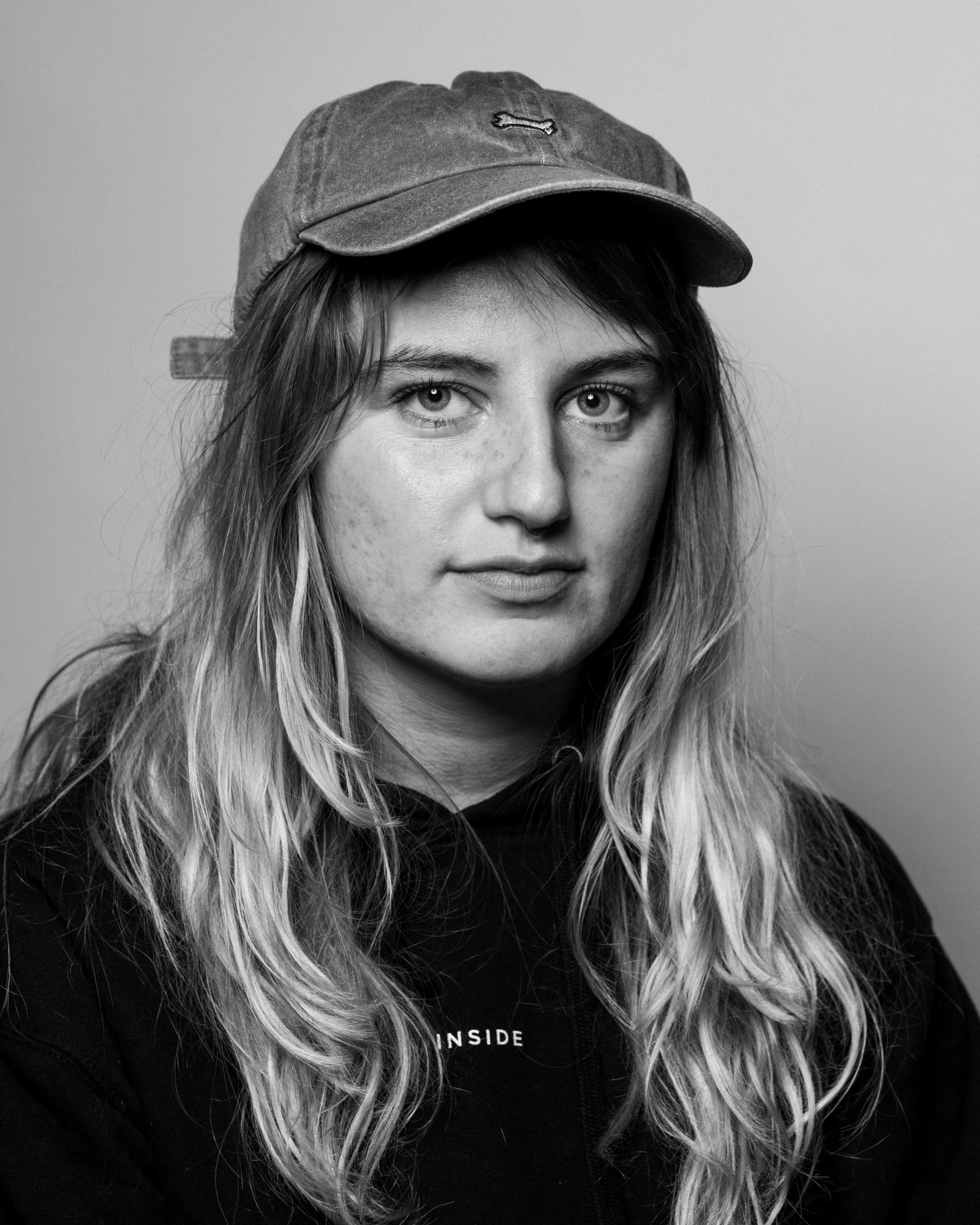