Check out the Brisket Plate at Horse Thief BBQ in Downtown 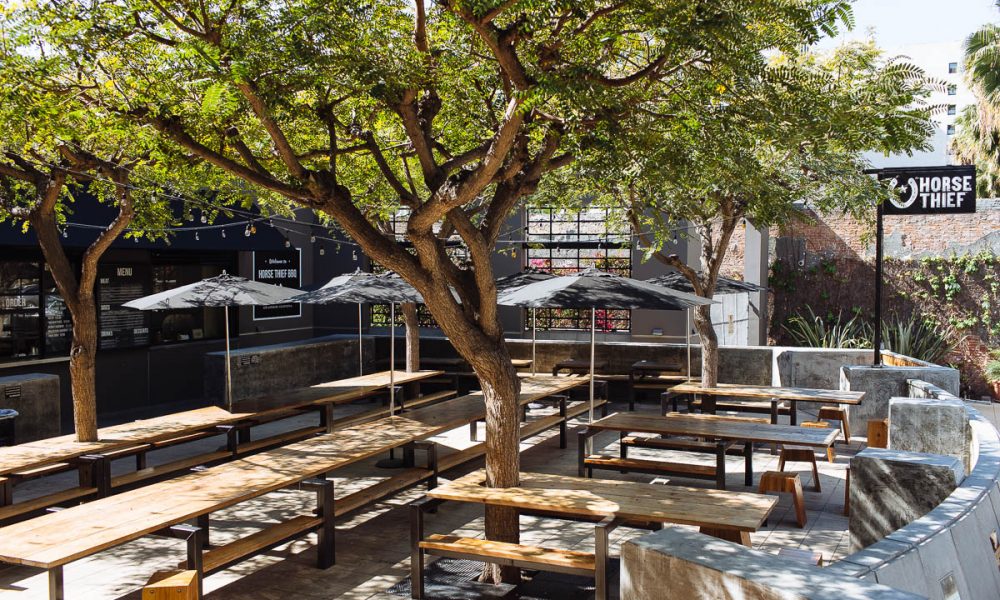 Today we’d like to introduce you to Downtown’s Horse Thief BBQ.

So let’s start at the beginning – how’d you get into the restaurant business?
Chef Anthony Chin, Chef & Partner:
I actually started in the IT field, in the music business, which is where I met Russell [Malixi, one of the owners at Horse Thief BBQ]. We had always had the idea to try to open a restaurant. Russell introduced me to his college friend Wade [McElroy, one of the owners at Horse Thief BBQ] and when the space became available at Grand Central Market, we decided to open Horse Thief BBQ. I had gone to culinary school on the side, thinking it would broaden my experience and just be a hobby, but my work in the music business often took me to SXSW which is where I fell in love with BBQ. So when I finished culinary school, my hobby became more serious. When Horse Thief first opened, I was still working at Universal, which meant my girlfriend at the time hated me because I was always working, five days at Universal and the rest of the time was spent at Horse Thief. In the beginning, Russell and I would even take turns manning the smoker, setting timers when we would have to check the temperature. I would be sleeping in my car at Grand Central Market waiting for my alarm to go off and then I would run in and check on the smoker. Ultimately, leaving Universal to run Horse Thief BBQ full time has been a really rewarding experience, because I get to see a direct result of our efforts and we get to work with a great family at Grand Central Market.

Wade McElroy, Partner at Esprit de Corps, restaurant group responsible for Horse Thief BBQ, Cafe Birdie, Good Housekeeping, and Bar Angeles:
I partially grew up in the restaurant business: my dad owned a couple cafes in Austin and my mother was an artist. I studied business in college, but when it came time to go work in corporate America I found myself drawn to the restaurant business. I started working a number of jobs in the restaurant industry, from barback, barista, bartender, etc. and in 2006, I opened Thunderbird Coffee in Austin, TX with my brother Ryan. Then in 2013, I opened Horse Thief BBQ with my college friend Russell Malixi.

What have been the biggest challenges you’ve faced over the years?
Wade McElroy, Partner at Esprit de Corps, restaurant group responsible for Horse Thief BBQ, Cafe Birdie, Good Housekeeping, and Bar Angeles:
Ha! Nothing is easy in the restaurant business. I think the hardest thing is building one from scratch, navigating all the building codes, tax laws, alcohol licensing, and everything else. It’s also expensive, so finding investors can be challenging. It’s totally possible though – it just requires a lot of time and effort.

Chef Anthony Chin, Chef & Partner:
Our biggest challenge in the beginning was just our inexperience. We had to learn every aspect of running the restaurant, from food costs to hiring to trying to make a product that people would like. Coming the from the corporate world where everything was organized, and we had meeting to do meetings, we found ourselves responsible for every aspect of the business from ordering and hiring to unclogging toilets. We were fortunate to find such a perfect spot, because Wade knew someone involved in the revitalization of the Grand Central Market and we were lucky to get to be one of the first new restaurants to be a part of it. We all just work together really well and it’s all been great, so we were able to learn quickly and make it work.

What stands out about Horse Thief BBQ?
Chef Anthony Chin, Chef & Partner:
Well, we have the best brisket in LA. We keep it simple, making traditional Texas style BBQ, dry rub and nothing too fancy.

Wade McElroy, Partner at Esprit de Corps, restaurant group responsible for Horse Thief BBQ, Cafe Birdie, Good Housekeeping, and Bar Angeles:
The food we serve on our menu is inspired by the classic BBQ joints we grew up with in Texas. We offer a selection of meats smoked with oak wood along with all the classic sides you expect with BBQ. We also have quite a unique location outside on the patio at Grand Central Market in downtown. It’s LA’s oldest food hall, with views of Angel’s Flight from our beer garden. Nothing is better than a beer and some brisket on our patio taking in the beautiful weather in LA.

Secret Menu item:
“LA Special” which is the smoked half chicken served with a grapefruit pistachio kale salad.

Special Brunch Weekend Menu:
On weekend mornings, the patio fills with patrons who brunch on Texas-style breakfast Tacos, Micheladas, and mimosas. The breakfast tacos are made with homemade tortillas filled with potato, egg, and cheese, with the option to add brisket or bacon, topped with either house made mild green salsa made from fresh tomatillo, or spicy red salsa made from roasted roma tomatoes, pasilla chili and chili de arbol.

Texas style Beef Brisket with our house blend dry rub that is smoked over oak wood for 12-14 hours
Dietary: Gluten-free

To create the Fried Chicken Sandwich, Chef Anthony marinates a chicken thigh in seasoned buttermilk and dredges it with spiced flour and cornmeal mix, then fries the chicken until crispy. He then tops the chicken with honey mustard slaw, jalapeno, mayo, and serves it up in a fresh brioche bun. “It has the perfect combination of flavors and textures,” remarks Executive Chef Anthony Chin, “Sweet and tangy from the slaw, crunchy and salty from the chicken, and a little heat from the jalapeños.”

This is our most popular side, made with three cheeses: cheddar, jack, and asiago, which is made into a cheese sauce that we combine with the macaroni. Then the mac and cheese is topped with more asiago and cheddar and baked until the cheese is bubbly and crunchy.
Dietary: Vegetarian

Parking Advice:
There is a large parking structure attached to Grand Central where patrons can park for 90 minutes for $3

Average Entre Cost:Our plates which include a meat or sandwich and two sides run $13-15