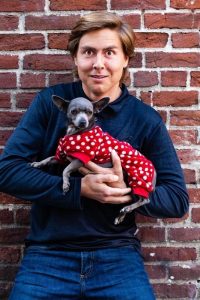 Today we’d like to introduce you to Ben Thompson.

Hi Ben, we’re thrilled to have a chance to learn your story today. So, before we get into specifics, maybe you can briefly walk us through how you got to where you are today?
I started doing comedy in June of 2017. I was spending the summer in LA working before my senior year of college and up to that point, I never even considered being a comedian. For 21 years, my life revolved around soccer. And it wasn’t until my junior year of college when I realized, “You know, this soccer thing might not work out… Now what am I going to do?” The back-up plan was to be a politician, lawyer, or a movie producer. You know, something sensible, lucrative, and would make years of education not a waste of time. But I didn’t love any of it. However, I’d always been a funny person, I always loved performing, I loved making funny sketches/videos, and I had enough people tell me “you should try stand up” to go “Screw it, why not”. I did my first open mic in front of two people. I bombed for 7 minutes and it was the most amazing 7 minutes of my life. I knew it was what I was supposed to do. I took the rest of the year to finish my degree/soccer career. Then in April 2018, the night I graduated, I got up at an open mic again and I haven’t stopped since!

I’m sure you wouldn’t say it’s been obstacle free, but so far would you say the journey have been a fairly smooth road?
Completely smooth. Zero obstacles. My comedy career has been a Boulevard of Green Lights (Kidding of course. However, I do want to know if anyone has told you they haven’t had any struggles. If they have, kind of legendary!). Absolutely there have been challenges. I’m a pretty pragmatic guy so there have been MANY nights where I’m waiting three hours to do three minutes at 1am on a Sunday night thinking “Is this really worth it?” I also struggle with the social side of comedy. A lot of the gigs you get early on are from the friends you make. In comedy, you always hear, “be a good hang”. I’m a horrible hang! I am not social at all and the whole process of being social makes me want to drive my car off the Santa Monica Pier. Starting out, the difficulties are endless — you do a lot of spots that are bad comedy environments (like tents under freeways), you have to balance comedy with a full-time job (I work 10-hour shifts M-F), and then you have to try and get a good read on a joke that you’re doing in front of a room full of comics (The reality is, comics aren’t real people. But that’s why we love them!) The whole process of “making it” in comedy is a struggle. But I look at it like surfing. About 1% of surfing is actually riding a good wave. The rest is paddling, crashing, and taking in water. When you start comedy, about 1% is murdering in front of a packed crowd. The rest is begging for stage time, bombing, and taking crap. But if you wanna make it, you gotta love to paddle! *I also don’t surf and I haven’t made it so, what the hell do I know.

Thanks for sharing that. So, maybe next you can tell us a bit more about your work?
The main focus is stand-up. Nothing makes me happier than coming up with an original bit, crafting it, and having it work on stage. You can’t beat making people laugh live. But I also make a lot of sketches and shorts, which is incredibly rewarding. In most cases, the people I get work with are WAY more talented than me so when we all put our heads together, we come up with stuff I’m incredibly proud of. Much like stand-up, there’s nothing like getting a text from a comic with a really dumb idea, like, “what if a guy from Queens was an Olympic Figure Skater?” and from that sentence, you write something, shoot it, edit it, and then see it get a bunch of views. That validation is addicting (and that’s why anyone gets into entertainment, right?) I wear many hats — performer, writer, actor, editor, director, etc.– but at the end of the day, I’m just a comedian because all I care about is jokes. All I care about is the funny, no matter how it’s delivered or what role I’m playing. And, oddly enough, I think that actually sets me apart. Comedy has gotten very serious. Most of the “comedy” we watch now is political, dramatic, lecture-like. All I care about is laughs. Anything away from that is a distraction and an excuse to not be funny.

Can you talk to us a bit about the role of luck?
Oh. It’s everything! Comedy, more than any other art, in my opinion, is a direct reflection of your life and experiences. And you don’t really get to choose the life you live, just how you interpret it (and I’m lucky enough I have an ability to interpret it funny!). For example, my favorite joke in my act is making fun of churches, and it came out of studying in Spain, where there are churches EVERYWHERE and you end up touring 300 of them. I’m beyond lucky I got the opportunity to go to Spain in the first place and ever luckier I was able to find the funny in it. On top of that, I’m lucky to live in a time when comedy has never been in higher demand; I’m lucky to live in a time when you can create content on your own (without a tv show or a movie deal); I’m lucky I grew up with incredibly supportive family (some comics would say this is a disadvantage believe it or not); it goes on… But I believe you create your own luck. All you can control is working hard, being funny, and being a good person. Everything else is out of your hands because you can’t control how people feel and think. But I believe if you’re steadfast in your effort, undeniably funny, and not a jerk, the opportunities come. 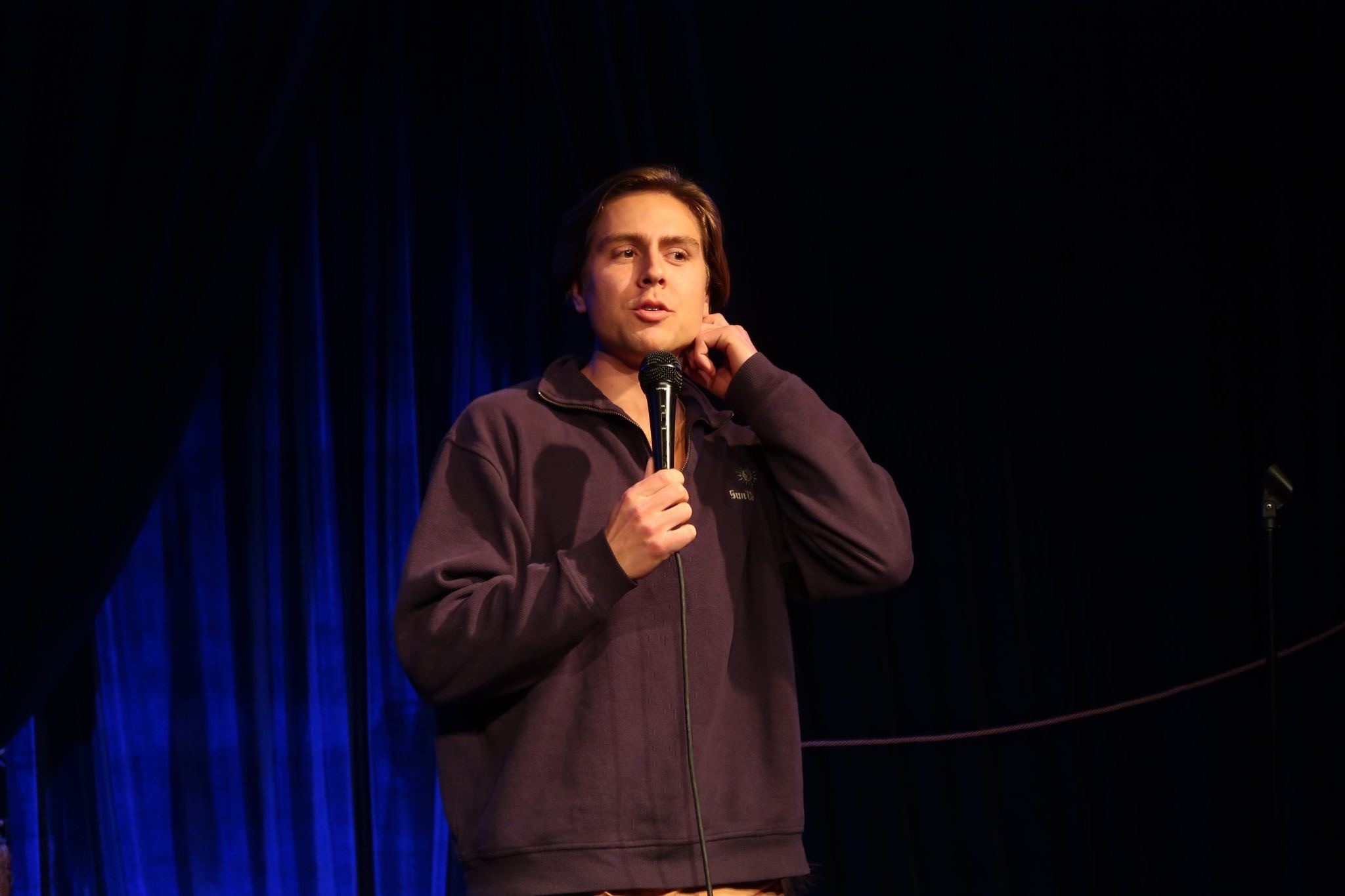 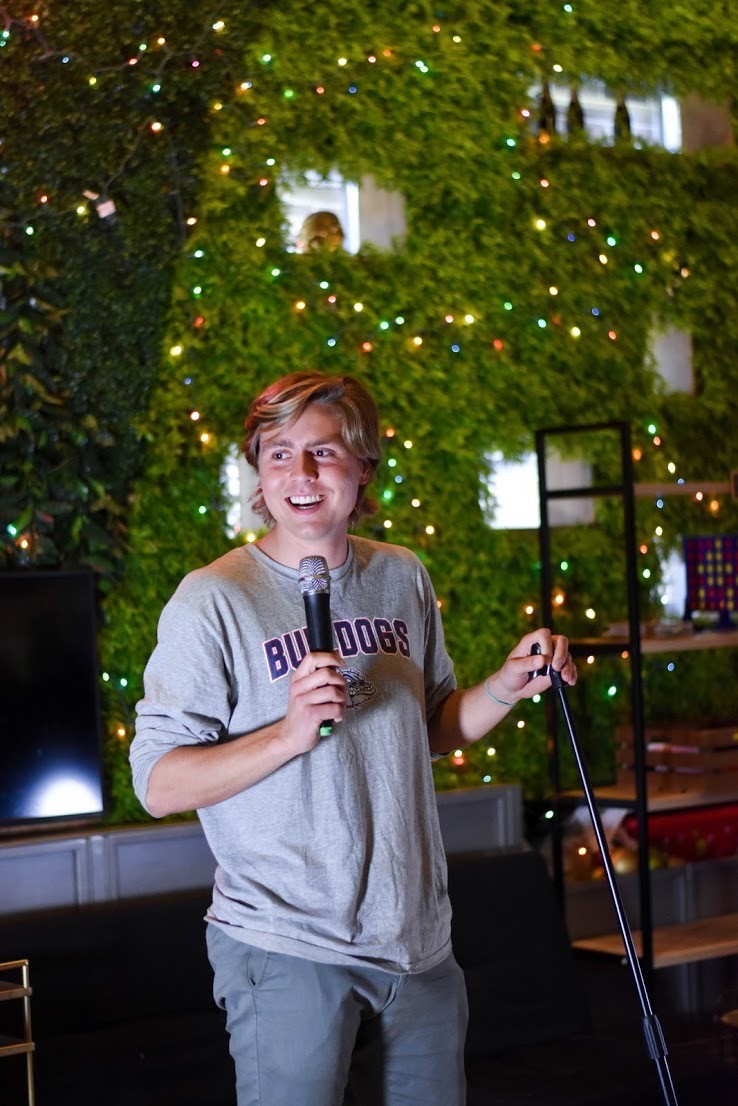 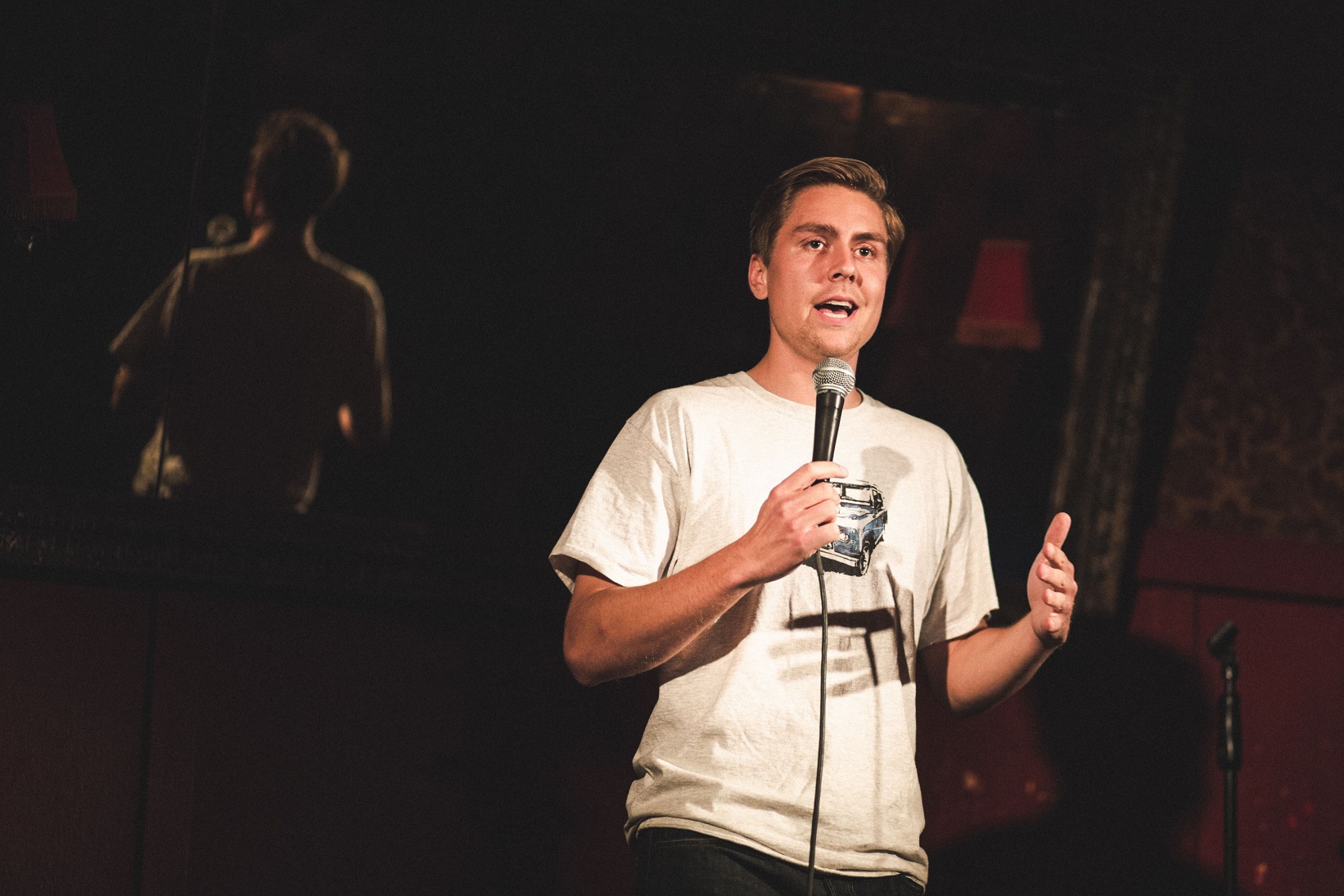 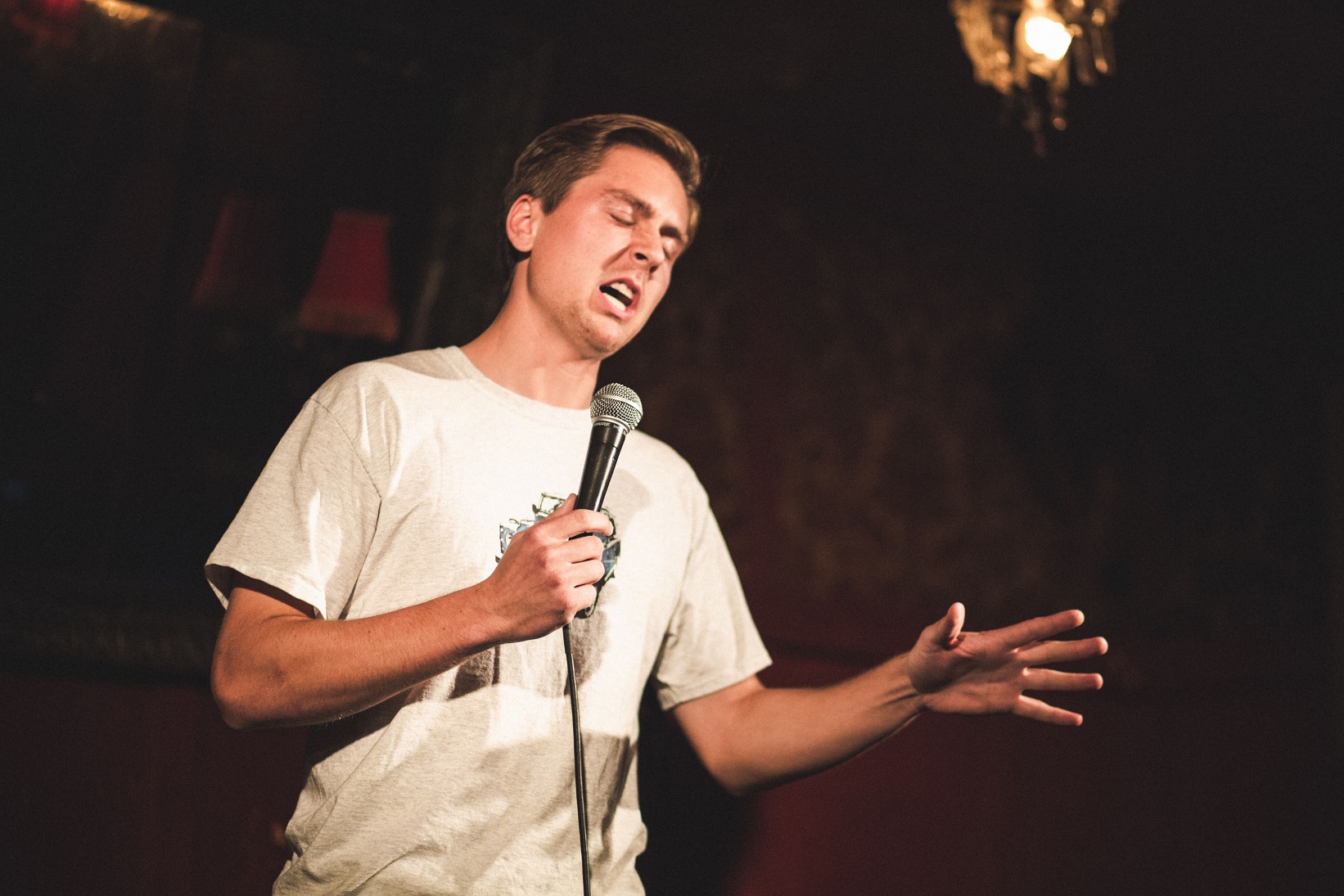 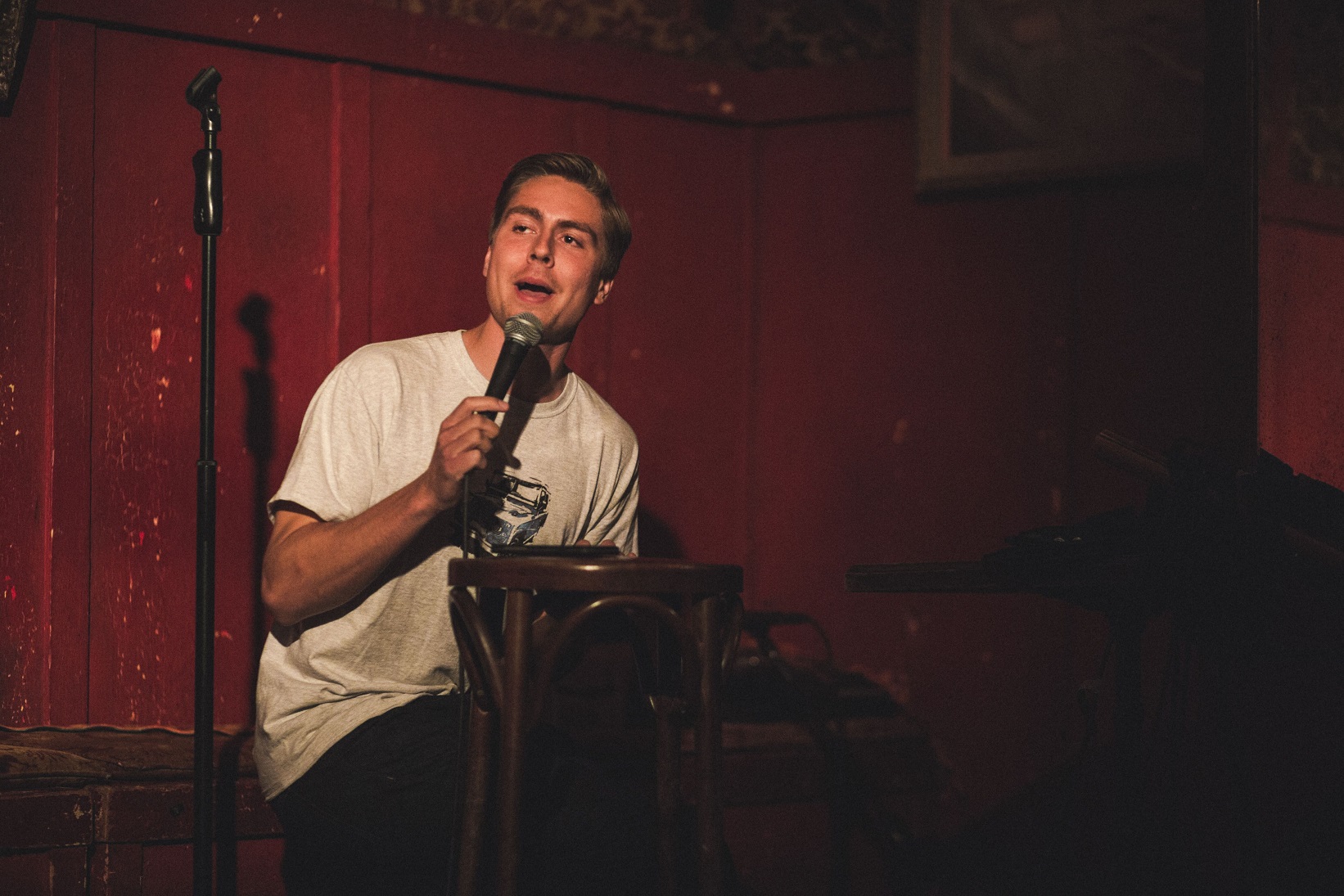 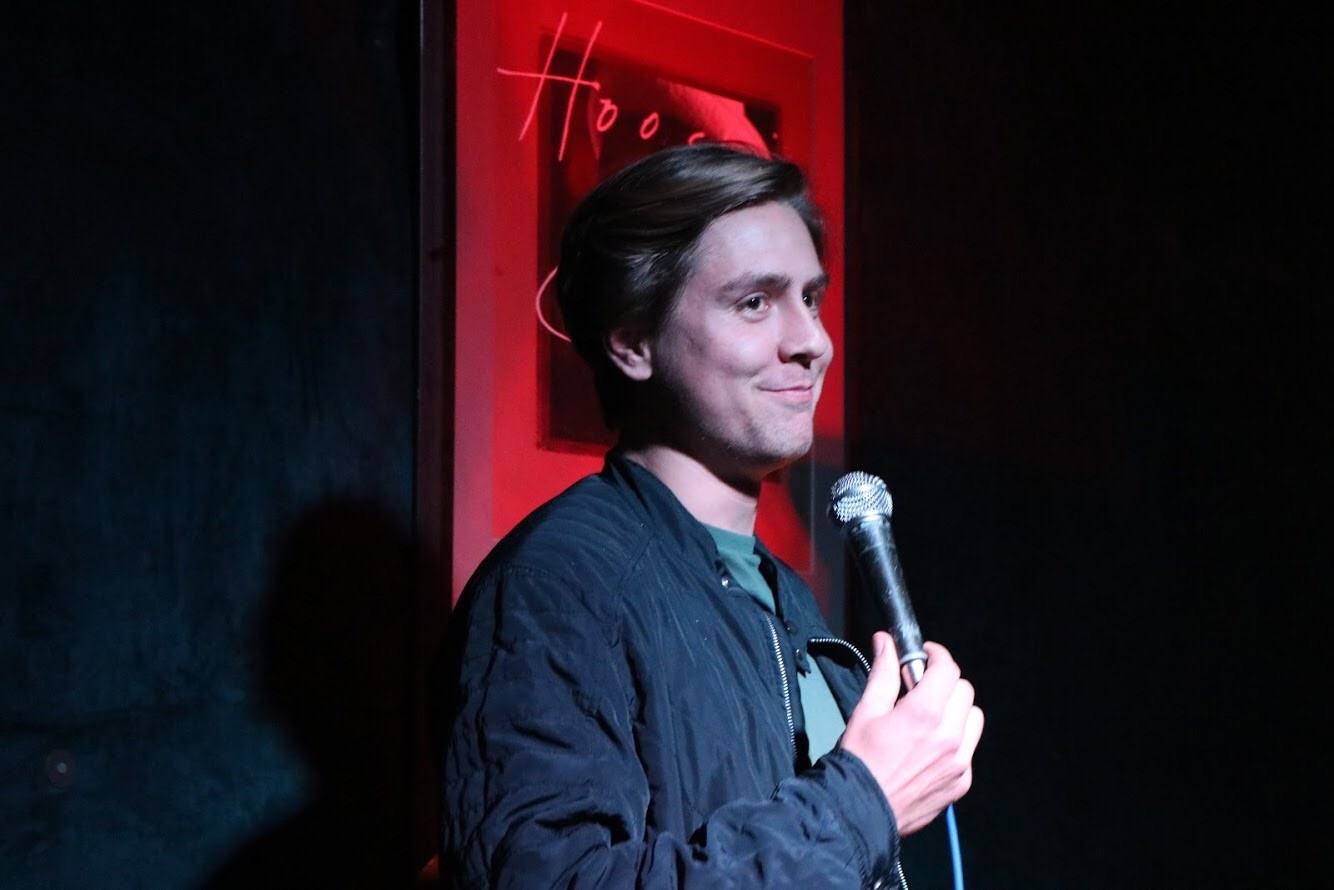 Image Credits:
Troy Linton (Just for the one of me holding the dog)