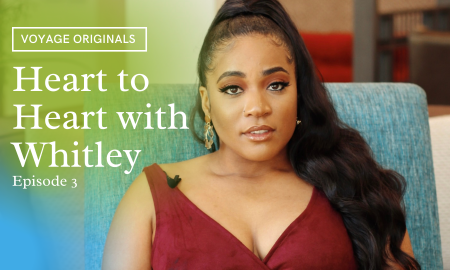 Heart to Heart with Whitley: Episode 3 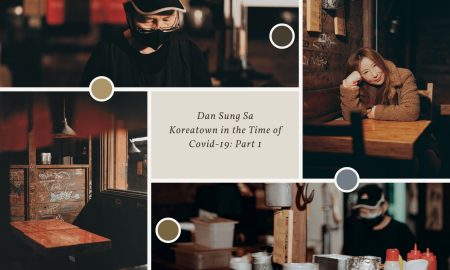 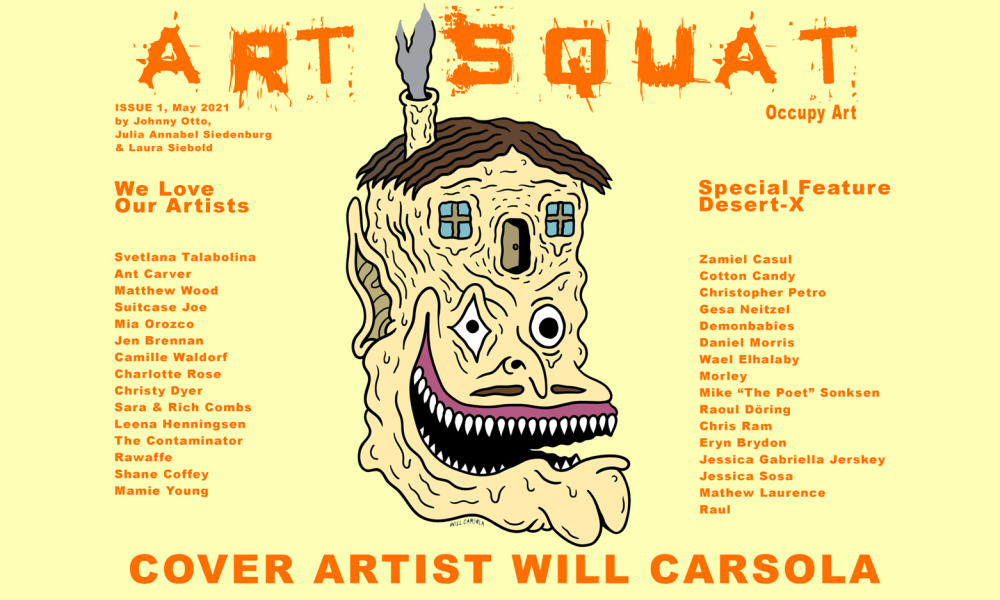 One of our goals at Voyage is to encourage others to start independent, non-corporate, non-VC backed media publications.  We think the world needs more outsiders to enter the media space.  Without outsiders coming in, we’d likely be stuck with the status quo for far too long – but with new voices, ideas, and energy we can look forward to a media landscape we can all be proud of.

Johnny Otto, Julia Annabel Siedenburg, and Laura Siebold have recently launched a new magazine called ART SQUAT. The cover art is was provided by Will Carsola. Their first issue is out now and you can check it out here: http://art-squat.com/

We’ve share a couple of key excerpts from their first issue below: 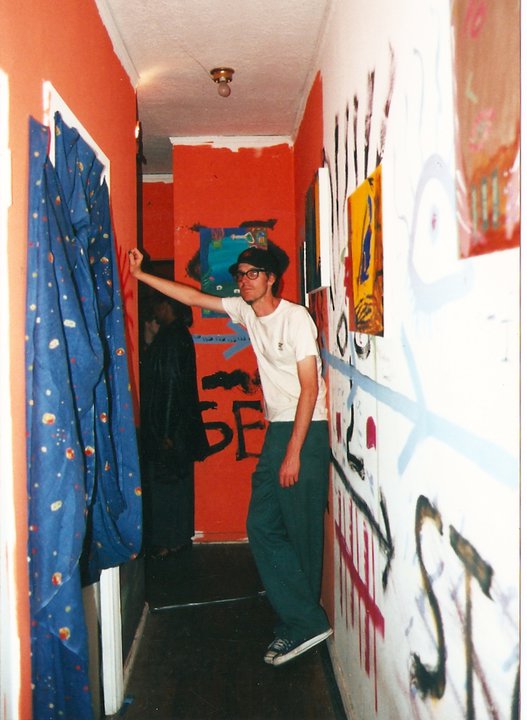 Johnny, what is an Art Squat and how did this journey begin?
Well, many many moons ago, circa 1999, my brother Michael Otto, who just prefers to be called Otto, was friends with a guy named Andy who lived in a fourplex on Genesee ave. just south of Melrose, across from Fairfax High school. Andy had told my brother that there was an empty two bedroom apartment on the second level across from his and that the Landlord hadn’t been seen in years and nobody was paying rent. He went on to tel my brother that the empty unit was filled with junk that had to be cleared out but once that was done, the space could be used as an art gallery. So, my brother and I and a few other friends, spent a few days clearing out all the junk, and we put large locks on the doors so that nobody could enter without us. There was no power in the unit that we occupied, so, whenever we had an art opening, Andy would run power cables out his back window and into the empty unit. Collectively we came up with the name Art Squat for our new gallery and we had some crazy raging parties. This went on for several years. The Landlord was never seen or heard from. In fact, there was a garage behind the property that had a vintage car in it and boxes of newspapers from the 80’s. J.V. McCauley from the LAWEEKLY attended our opening night and here is what he wrote:

“What would you do if the landlord stopped collecting rent and allowed squatters to take over an abandoned Fairfax-district apartment right next to yours? Why, commandeer the empty site, run extension cords from your pad into the space and create < an art collective, of course. Tha’s exactly what host/artist – not to mention beautiful – ANDY SCHEER did when he brought together artists HOLLAND, DAVID FRUDIS, MICHAEL MORRISON, JOHNNY OTTO, and just plain old OTTO for ARTSQUAT recently. Judging by the refreshments (beer and a boozy pink punch – what squatter can afford champagne?), this was no fancy-shmancy party. Among the smart art tarts milling and swilling while reviewing the hand-painted photographs, illustrations, and paintings were actor ALEXIS ARQUETTE, superstar CANDYASS, hairchopper FRANKIE PAYNE, PETRA HAYDEN (formerly of THAT DOG), Aussie transplants BELINDA GAVIN and her hot boyfriend MULLY, saucy SELENA, who got into the spirit of the evening by painting “ARTSQUAT” across her breasts (now that’s what we call titillating), club king JOSH WELLS, photographer ANDY DEVINE, cocksucker to the stars HAGATHA, the long-lost but not missed SHELVELVA KENNEDY-SINATRA, and brassy babe MISS ANDRA.” – LAWEEKLY , J.V. McAuley

But that was 22 years ago, so why now use the name Art Squat for a new art magazine? Well, for one, it is a catchy name. Two, I’ve always liked the idea of being slightly outside of the normal channels when it comes to having art openings and for promoting my art and the art of my fellow Artists. To Squat in the art world, you could say. Hopefully the Landlord doesn’t make an appearance and this magazine will reflect our devotion to the Artists who make this world a beautiful place to call home, for a long time. Read more >> 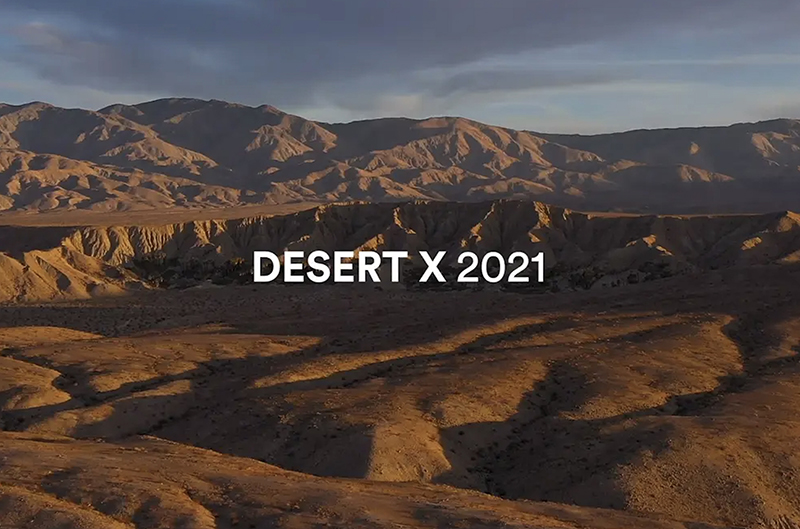 Desert X seeks to engage the viewers by presenting art in open spaces, accessible and free to anybody who passes by. Those who are interested in contemporary art get a chance to experience diverse culturally and historically inspired pieces from selected artists around the world.

The first Desert X exhibit opened to the public in 2017, showing artworks from 16 artists in different locations in Coachella Valley and Palm Springs. After a secondary edition following in 2019, the Desert Biennial Organization extended the project, creating a presence outside the U.S. in 2020.

In 2021, Desert X returned to its original location in Coachella Valley between March 12, 2021, and May 16, 2021. Curated by Neville Wakefield and Co-Curator César García-Alvarez with 13 participating artists from eight countries exhibiting their work in the context of Desert X 2021, the organization seeks to make art accessible and (re-)open a dialogue about the desert as a natural form and the product of human narratives (…).

The Desert X 2021 edition seeks to explore the idea of the desert as a journey and tells a narrative of how this journey has been and continues to be shaped by minorities. The exhibit includes diverse communities in the Coachella Valley and around the world and looks at how these communities are shaped by the past, present, and future of the desert as a landscape and an idea, recalling memories and diverse narratives. For those who did not make it this year, we have created a virtual experience of our Desert X 2021 journey. Read More >>

From Cover Artist Will Carsola 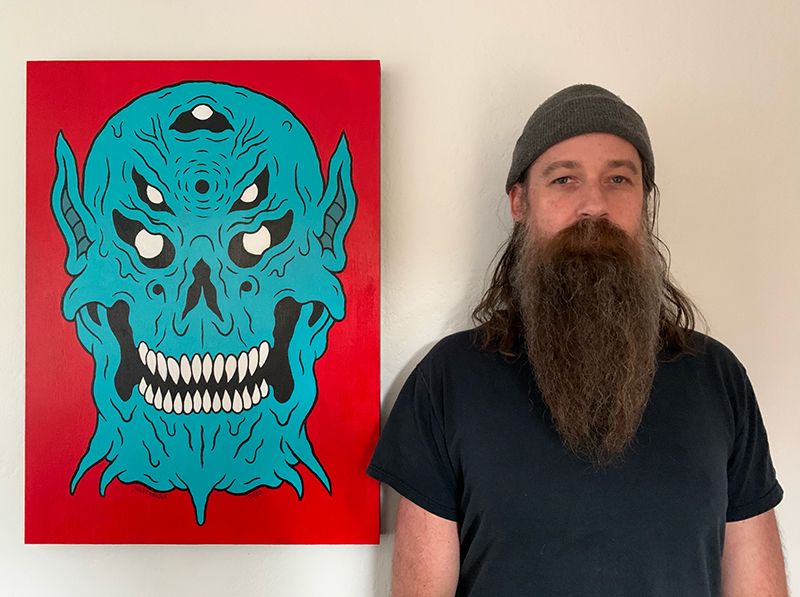 Will, your claim to fame is creating a cartoon about a Satanic Dog named Mr.Pickles. Do you eat a lot of pickles? Or what was the inspiration for a show about a demonic dog? When did you start working on the idea and how long did it take before it became a series. Can you walk us through all of the details?

Yes, I love pickles! Mr. Pickles started as a one sentence idea that I wrote in 2012 which was then expanded on. But within that first sentence, the core of the idea was that Mr. Pickles was a cute and lovable dog who loved to eat pickles but who was also secretly evil and murderous. The connection at that time between an evil dog and pickles was an observation that I’d made long ago about pickles. I had noticed that people who don’t like to eat many vegetables often had a huge hatred of pickles, some people are even creeped out by them. When I was a bartender in Richmond there was a girl who’d come into the place and if there was a pickle on a plate anywhere near her she’d run out of the building. So the early connection I was making was that if there was an “evil” vegetable, it would be pickles. Pickles is also a funny word so Mr. Pickles had a funny / cutesy sound too it which is perfect for a dog that kills people and has a secret lair with a river of blood under his dog house. So the idea started in 2012 or so with a single sentence. Adult Swim liked the idea so then Dave Stewart and I expanded the world of Mr. Pickles with all the characters of Old Town and then some story ideas. One of those ideas became a pilot script, which then became a pilot and then we were off to start season 1 which later aired in 2014.  Read More >>

You grew up in Estonia, when it was still part of the Soviet Union. Your home country was part of the Singing Revolution, as it is called. Do you remember much from those days? How old were you then? Would you say those were turbulent times, happy times or a mixture of both?

Iron curtain was a political boundary, I was still a child, when it collapsed. As children, we can hardly see everything that was happening around. Yet, I remembered that many Russian natives had to leave for Russia, because of the work conditions. My mother stayed however. She took a course to learn Estonian and some time after that, she was able to legally continue working. This question prompted me though to go back in time. I wanted to refresh my memory – was that what I remember true or was it partly my imagination. So I googled: “Tallinn, 24 Feb. 1991. Photos”, but I could not find anything I remembered. At the age of 11, we still see the world through the prism of our parent’s vision. My Mom or Grandma never talked about politics at home. We also did not have a TV, as modern children do, who involuntarily get stuffed with “juicy” News. We walked a lot, played and came up with ideas to create our own toys. It was a different world, albeit rapidly changing, and yes – it was not always easy for my mom and there were days when we had no food, but nevertheless we had a happy and carefree childhood. It was definitely a peaceful time. Read More >>